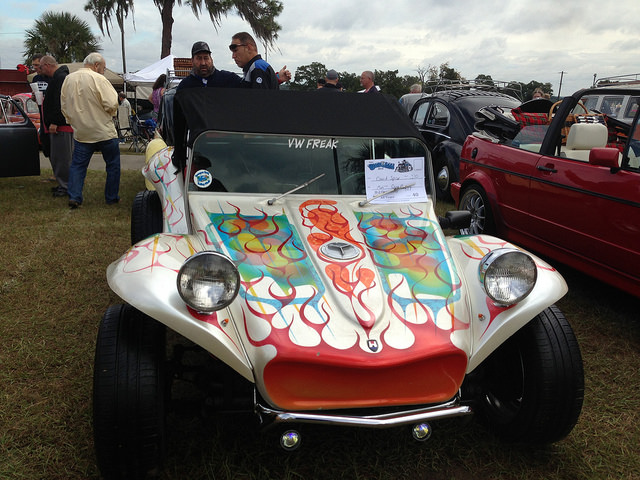 At the 2014 Pasco County Bug Jam, we spent hours walking up and down the rows of vintage VWs. This year’s event was bigger and better than before, with lots of dune buggies on display.

Share
Tweet
Pin
Share
Email
With a prediction of rain, and overcast skies we took the back roads to Dade City for this year’s annual Pasco County Bug Jam. Students from the local high school kept parking in order. We were lucky to get an end spot, only a couple of rows from the entry gate. Rounding the corner to the entrance, we saw that the line nearly went out of sight. Thankfully, they had extra people manning the gate, and the line moved quickly.

Through the gate, we were once again in the land of VW Nirvana. A VW dragster, a dune buggy, two Westys and a row of classic bugs welcomed us as we entered the magical land of Volkswagen.

Shows like these are not just about the cars. The VW people are as interesting as their vehicles. A old photo with two young children was standing beside a 1958 Van. It read “one family owned since new.” The fellow sitting in the chair next to it said “that’s me, I’m the one on the right.”

Over the loudspeaker, a live DJ mixed VW trivia, classic rock and roll, and craziness over the speakers, like “we are looking for the best VW tattoo, swing by the stage and show us your tat.” Or “Who’s wearing the oldest Bug Jam T-shirt? Come show us what you’re wearing!”

This year’s entertainment was provided by the “Blues Brothers.” They were not the Jake and Elwood that I remembered, but it didn’t matter. I could hear them, and the crowd cheering them on, all the way out into the parking lot as I was carrying our swap meet finds to the car.

As we walked up and down the rows of vintage VWs, we recognized a few from previous Bug Jams or other car shows we’ve attended. It’s always fun to see what’s new or has been added. The cars went on and on. Looking down the hill where the swap meet was held last year, it was filled with dozens of bugs, buses, buggies, and other VW-based vehicles. Later we heard the announcer say that there were 103 more vehicles than last year’s show.

Dune buggies were on nearly every row. I have never seen so many at one show. I have been watching their numbers grow since I sold mine many years ago. They have now become so popular that they have their own class, H-2 Open Body.

There were a couple of original Meyers Manx buggies. They are considered the father of the dune buggy craze. Across the country, hundreds of other manufactures began creating their own version of the fiberglass dune buggy. Many looked so much like a Manx, that only a true “Buggy Person” can tell them apart.

These buggies became a blank canvas: a one or two piece body, a windshield, big tires in the back, and no doors. Most were mounted on shortened VW pans and few added hard tops and side pods. It is rare to see any two that are alike. Metal flake paint was in its full glory. Pink, purple, gold, green, and candy apple red were just a few of the color choices.

Walking through the parking lot, on the way back to our car, I pointed out a cool homemade camper to Sandy. There was nothing like it in the show, and there it was, just sitting out in the parking lot. As we drew closer I kept thinking that there was something different about it? Why doesn’t it look right? A few cars away, it hit me. It is two feet longer than a standard VW van or camper.

The VW family, including a golden retriever, were comfortably sitting inside their creation. The top and windows were open along with the “barn doors.” I told them that I had just realized that the length was one of the things that made their camper so unique.

As we bid them goodbye, I had to smile. We had just spent a little time with a few unique members of our “extended” VW family.

Leaving the parking lot, a few drops of rain hit the windshield. I was already thinking about next year’s Bug Jam.