When getting to know wolves means sitting among them, it’s a bit intimidating. But being among the wolf packs of Seacrest Wolf Preserve near Chipley will open your eyes as to why wolves are well worth protecting.

When I heard that we would be visiting a wolf preserve during our visit to Northwest Florida, I wasn’t all that excited. I’m not really a zoo person.

Seacrest Wolf Preserve, however, is not a zoo. Their tagline is “Preservation through Education.”

Right off the bat, they want you to understand that wolves, which have gotten a bad rap through history, are beautiful mammals with a fascinating family structure.

We were met by Ricky Quick, a long time volunteer at the preserve and a recent staff member after his retirement as a dog trainer with law enforcement.

We sat on the porch as Ricky gave us a lesson about wolf behavior, and human behavior towards them.

He explained how most of the wolves at Seacrest were hand-raised as pups by Cynthia Watkins. She and her husband Wayne started the preserve in 1999, and it now covers more than 480 acres.

Once I learned all Ricky had to share about the wolves, about their social structure, and about the preserve, I was impressed.

Ricky led us into the first compound, locking the two gates behind us. Three wolf pups walked toward us. I was a little intimidated.

At only ten months old, weighing in at 80 pounds each, they looked like wild animals about to make a meal of us. Instead, they approached slowly and carefully, sniffing as they brushed by us.

Ricky had us sit on a large log. He said that we would be less intimidating if we were seated. I was thinking “us intimidating them?” 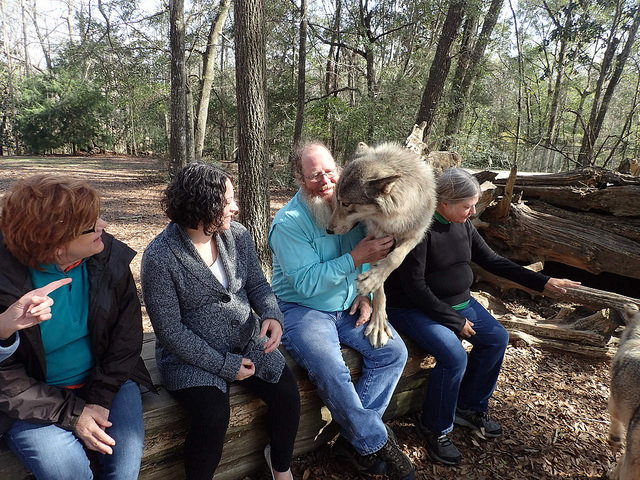 We were only seated for a moment when I felt something big squeeze between Sandy and I. We were being visited, face to face, by this beautiful timber wolf.

Our fears melted away as our new friends wove around and between us. Still puppies, they were curious and wanted to check out the new visitors.

Raised and fed by hand since four weeks, they trusted us, as they did their human handlers. But they were still wild and cautious, and were amazing to see this close. As we grew a mutual comfort and trust, they rubbed up against us and allowed us to stroke and pet them. 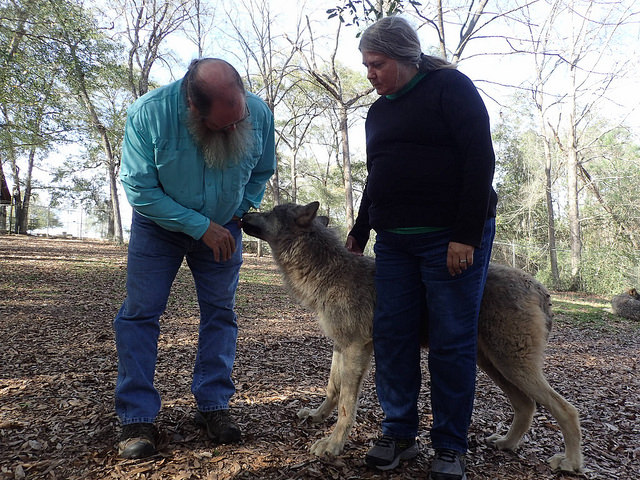 While scratching one I obviously found a really good spot, because it didn’t take long before he was laying on his back enjoying a really good belly rub.

Ricky looked over and told us that I was being shown the highest level of trust, an act of submission.

What an honor, being the only one of our party to be shown that much trust. Maybe it was my bushy beard, I was almost as furry as one of them. 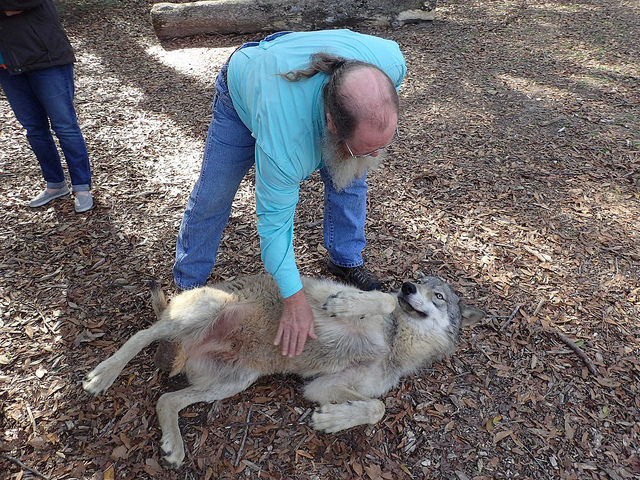 As we continued to walk the grounds of the first wolf pack, the wolves came and went. When they all disappeared, Ricky would tell us they had some “wolf business” to take care.

Often, this business would include howling. We listened in amazement as the other wolf families joined in.

Each pack is a family and lives in its own separate enclosure covering between three and five deeply forested acres. A stream runs through all of the enclosures and has large ponds in it for the wolves to splash and swim.

Here we stood among less than 40 wolves in five family groups, listening to the haunting sounds of howls across the compound.

All I could think of was what it must have sounded like when there were hundreds and hundreds of wolves all howling as the covered wagons crossed the Great Plains.

I’m sure it was as beautiful as it was scary to those who were heading west.

When our tour ended, I was awestruck. I never imagined that visiting a wolf preserve would make me feel this way. It was a wonderful and unique experience, and yeah, it is that cool.

Just as we say about protecting Florida’s outdoors – you must fall in love with it first by experiencing it.

To feel the same way about protecting wolves, you need to see, visit, and experience these creatures up close and personal. And that’s why Seacrest Wolf Preserve exists.

Reservations are required in advance to visit Seacrest Wolf Preserve, which is located south of Chipley near Wausau.

They offer inexpensive general tours on Saturdays, and more in-depth tours other days of the week.

Restrictions as to what you can wear or bring are extensive and are primarily for your safety and that of the wolves.

Children under the age of 10 are not permitted. Camping may be available on the property, please call ahead.

Our group enjoyed a VIP tour, which gave us plenty of time with the wolf packs. Learn more on their website.