John’s first backpack is now a museum piece. Sandra went through a parade of packs before settling on an Zpacks Arc Blast. Here’s what we carry and why. 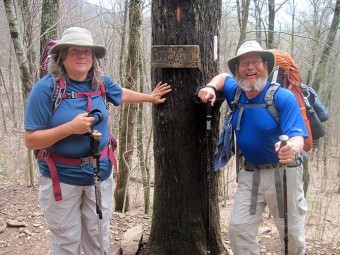 John’s first backpack – which he used on his 50 mile hike with his Scout troop in the early 1970s – is now a museum piece. You’ll see one of these standard-issue canvas Scouting backpacks from the 1960s on display in the backpack section of Travel Country Outdoors.

Sandra went through several packs in the 1990s when she first started backpacking, and the one she owned the longest (and liked the most) fell apart in our first week on the Appalachian Trail.

Here’s what we’ve been using since we headed out on the AT in 2012.

DISCLOSURE: Our reviews may contain include affiliate links so you may purchase the item if you are interested in it. We earn a small commission on each purchase.

The Osprey Aether 70 is the most comfortable pack that I have ever owned, but mine is from 2011 and worthless in the rain without the use of dry bags.

Even the matching Osprey pack cover did not keep the rain out. I attempted to invoke the “Almighty Guarantee,” but was unable to resolve anything with Osprey by email or phone. People with newer packs don’t have the same problem.

Since I couldn’t talk Osprey into fixing or upgrading my pack, I’ve picked up a lightweight GossamerGear Mariposa 60 to try out as a potential replacement (they’ve since replaced it with the Gorilla).

An ultralight backpack, with pocketed hip belt, my medium-sized pack with removable aluminum back stay and hip belt weigh in at 29 oz. with an internal capacity of 2,200 cubic inches.

With an overall combined capacity of 3,487 c.i. and the ability to handle 35 lbs. I’m looking forward to seeing just how this ultralight weight pack handles and feels.

John insisted I try out packs at REI in Atlanta on the way up to the Appalachian Trail, since my go-to pack was an REI Rising Star, more than a decade old, and its interior was flaking apart.

I insisted on using it anyway. Sure enough, the de-laminating let the rain in my pack.

So five days into our AT hike, on my birthday, we went to the nearest outfitter and bought the Osprey Ariel 65. I wear a medium (it comes in four sizes).

It has nearly 4,000 cubic inches inside, which I didn’t think I’d need, but it turned out to be a perfect choice for the Appalachian Trail. It’s a bit of overkill for an overnighter, but I can cinch down the unused space.

While it is hefty at 4 lbs empty, it is sturdy and sits well on me. It has plenty of compartments for organizing (crucial when you live out of your pack for months on end), good airflow, and unlike John’s older Osprey, doesn’t leak.

It doesn’t take long once I’m wearing it to forget that I have a pack on. Especially when it only has an overnight load in it.

In late 2016, we headed to Zpacks, which is based in Melbourne, FL, and makes ultra lightweight gear for long distance backpackers.

After recuperating from knee surgery, I was on a tear to complete the Florida Trail end-to-end and John wanted to make sure I didn’t injure myself again.

With Matt Favero’s help, we found and fitted a pack that felt like it would work perfectly for me: the Zpacks Arc Blast.

I had him add a couple of optional pockets to make it easier to organize my gear, which bumped the base weight up an ooch. Not a problem.

My first trial of the pack came while backpacking across Eglin. When I checked my pack weight before leaving I almost cried: it was still 22 lbs! I quickly shed a bunch of stuff I didn’t need.

I then realized that I was including the weight of 3 liters of water and my food for three days in that calculation. So the base weight before food and water was not bad at 14 lbs, especially with carrying gear for cold temperatures.

Over time, I learned to trim back to the essentials, which wasn’t a big deal when John and I were sharing gear, but important when I was headed out solo and had to wrangle all the weight myself.

On my most recent backpacking trip, across Big Cypress, I finally got the base weight down to 11 lbs, and that was with a BV450 BearVault inside.