On a peninsula where the Timucua used the surrounding estuary for sustenance, Betz-Tiger Point Preserve provides more than six miles of breezy trails

North of the St. Johns River in Jacksonville lie vast estuaries stretching to the Florida border. You only catch a hint of them while driving towards the Talbot Islands on Heckscher Drive.

A puzzle of public lands provide access for paddlers into this extensive maze of waterways, with Betz-Tiger Point Preserve being one of the more far-flung in the city of Jacksonville.

The trails connect directly to adjacent Pumpkin Hill Creek Preserve State Park, which you drive through to access this preserve.

Acquired in 2003 by the city of Jacksonville, this land was under more than a century of ownership by the Tison family as a retreat from the city.

A wetland along the Red Trail

The park was developed and is maintained in partnership with the Timucuan Parks Foundation.

Their interpretive signage helps provide the broad background of the Timucua culture in this region.

The trail closest to the parking area is accessible, as are the restrooms and picnic pavilion. The picnic area has a stone pavilion with built-in grills.

Bring bug spray, as the mosquitoes can be intense at times. When there is a nice breeze they aren’t as much of a problem. 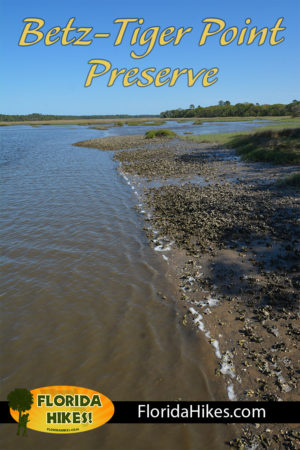 Use insect repellent and clothing appropriate for warding off ticks. We know someone who picked up a tick in this area and later tested positive for lyme disease.

Except for the accessible path and the Blue Trail, some of the trails can be wet and mushy after a rain, and can flood in a couple places.

Oyster beds edge the shoreline, so be sure to use only marked launches when paddling. There is one by the observation deck and another just south of the preserve gate in adjoining Pumpkin Hill Preserve State Park.


On Interstate 295 east, north of the Dames Point Bridge, exit onto Heckscher Drive (SR 105) east. Get in the left lane and make the left at the light onto New Berlin Rd. Drive 3.7 miles north to where it ends at Cedar Point Rd.

When you take a look at the big map at the trailhead, be sure to grab a copy or snap a photo of it. A map is essential up at the north end of this preserve, where there are many cross trails.

We covered this preserve with Sandra hiking the north end with her friend Linda while John rode in from off-road biking at Pumpkin Hill to check out the Orange Trail and the scenic Blue Trail.

The map further down this page shows the routes we took. Using the official park map from the link at the bottom of the page, you’ll see you can extend or change the north portion of the loop.

In all, you can tally more than 6 miles between these trails if you head up to the very top of the peninsula.

John biking along the Blue Trail

On our first visit here, however, the goal was to find out where the paved trail went. An accessible trail parallels the beginning of the Blue Trail from the parking area.

Where the Blue Trail and Overlook Trail diverge

It leads into the forest along the estuary edge, where the trails diverge before you come to a picnic table and interpretive signage under the cedars and oaks on the edge of the bluff.

The accessible trail ends at a large observation deck with a sweeping view of the estuary along Pumpkin Hill Creek. A round-trip on this paved path is 0.2 mile.

Observation deck at the end of the trail

The Blue Trail is a loop providing the gateway to the trail network at the north end of the peninsula, but the east side of it is worth walking all on its own, as it offers the best scenery.

Follow it from where it adjoins the paved trail up along estuary. Where it comes to a fork, bear right to walk out to a natural overlook across the water. The round-trip to here is 0.5 miles.

John at the bluff at the end of the Blue Trail

Although it’s shown on the preserve map as a 0.6-mile hike, the Orange Trail is a 1.5-mile round trip from the main parking area.

It also has a scenic overlook as its destination, but it takes more effort to get to. Walk south paralleling the park road for a quarter mile to where it goes into the woods on the right.

Pass a side trail to the left, which connects this trail system to neighboring Pumpkin Hill Creek Preserve State Park.

Sand live oaks create a tunnel effect at the start of this trail, the broad path framed by saw palmettos on both sides.

Along the Orange Trail

Walking under the shade of oaks, pines, and dahoon holly on a bed of pine needles, you can smell the salt breeze in the air.

Trail’s end is simply a grassy spot bounded by saw palmetto. Step out from under the oaks for a view across the salt marsh to the north end of the peninsula. Return by the same route.

Estuary view at the end of the trail

While you can use the Blue Trail to get to the north end trails, we didn’t realize that we were on the west side of the Blue Trail when we headed straight up the two-track road behind the gate.

This is the most direct route to where the Blue Trail meets the Yellow Trail, a loop around the upper end of the peninsula.

Two-track road that makes a beeline for the North End

What’s tricky in following the Yellow Trail is there are many side trails and cross trails, most of which either have no markers or are marked as the Red Trail.

Also, the outside of the Yellow Trail loop continues straight north on the two-track road. After walking up the road we decided to find a more shady route. Turn left at the map kiosk after 0.4 mile.

It turns due north, becoming a sandy forest road through planted pines. Occasional markers confirm the route. As the road narrows, needles cover much of the grassy footpath.

Passing a trail tunneling into the pines to the left, the Yellow Trail comes up to a swale, an ephemeral pond in the woods with water at the very bottom.

At the north end of the swale, a trail headed into a marsh and was flooded. The Yellow Trail looped back south around the pond.

The “pond” looped by the Yellow Trail

Following the Yellow Trail back to the south end junction, we took the Red Trail due west through its tunnel of pines.

While there were many clumps of saw palmetto and scattered oaks in the understory, the straight lines made it obvious that the peninsula was turned into a pine plantation long ago.

Passing a junction of Red Trail with Red Trail (which leads to confusion in a few spots), with exit signs pointing in two directions, continue straight ahead.

The trail passes a large wetland on the right before it narrows significantly, crowded on both sides by the saw palmetto.

The narrowing tunnel of pines

After 1.2 miles, this Red Trail meets the outer edge of the Yellow Trail, which is coming in from the north end via that two-track road back at the kiosk.

Turn left to head south. While the estuary is near and you can certainly smell it, it isn’t particularly visible other than as open blue sky beyond the pines.

Walking through a scrub forest

Still bounded and interrupted by planted pines, the trail enters a coastal scrub, with its diminutive oaks creating a more intimate trail tunnel.

Along a tall line of slash pines, pass another Red Trail leads straight back to the kiosk where you started the loop.

A small marsh along the Yellow Trail

The trail drew close to a marsh, but didn’t offer the estuary view we had hoped for at the “Marsh Overlook” marked on the trail map.

Instead, once it swung east, it came up to an interpretive sign on the tribes of the Eastern Timucua, and an old directional sign.

Meandering along the edge of the pine plantation in more natural coastal hammock, it was obvious that the estuary had to be beyond the trees.

By the next interpretive sign on Timucua culture at 1.9 miles, a beaten path finally led to a glimpse of the estuary over the saw palmetto.

The estuary view from the peninsula

An exit sign pointed north at a trail intersection here. We followed the much longer perimeter meander of the Yellow Trail through what turned out to be a rather soggy corner of the peninula.

The exit sign points to a much more direct route back out of the trail system, if you’d rather not possibly get your feet wet.

The Yellow Trail narrowed down immediately, almost as if it was created as a singletrack bike trail.

Since cyclists can ride off-road on these trails, it wouldn’t surprise us if that’s why it meandered so much.

Dense vegetation along the trail corridor

When the corridor opened up, it was to loop around wet flatwoods with a lot of mud. Trees were down everywhere, perhaps from an earlier storm.

A cordgrass marsh made a showy incursion between the sparse pines and clumps of saw palmetto. Water spilled into the footpath until it gained a little elevation.

A dense understory of gallberry and saw palmetto yielded to bayhead, so we knew the footpath could get wetter after a rain.

Where the pine forest was dense with loblolly bay, the footpath became a cushioned walkway on pine duff, rising up into the planted pines to reach a T intersection.

Junction of Yellow and Red Trails

A prominent Exit sign pointed right. Turn right to follow the yellow trail up a long corridor flanked by straight rows of pines.

Keep going straight ahead past other incoming trails until you reach the trail kiosk and the top of the Blue Trail loop again after 3.2 miles. Cross the two-track road.

On the other side of the road, the Blue Trail enters the coastal hammock, where sunlight streams through draperies of Spanish moss in the live oaks.

It only takes five minutes before you emerge on the bluffs above the estuary surrounding Pumpkin Hill Creek. The view from the spur to the left is worth the short walk.

Follow the Blue Trail back through the coastal hammock along the bluffs, with one last look at the water from the picnic area from the observation deck.

Returning to the trailhead, you complete a 4-mile hike on the north end trails (Blue, Yellow, and Red).

Picnic area by the observation deck

With layer upon layer of human habitation atop the highest natural hill on the southeastern Atlantic Coast, Fort George Island offers a long look at the past.

One of the historic treasures of Timucuan Preserve in Jacksonville, Kingsley Plantation interprets the everyday lives of free and enslaved peoples on an early Florida plantation.

With one of the closest wild beaches to Jacksonville, Little Talbot Island State Park is a heavily visited park, and not just for its beaches. Paddling in the estuaries and camping amid the dunes are popular pastimes, too.