Within sight of the massive Vehicle Assembly Building at Kennedy Space Center, this ride to the Indian River Lagoon offers some of the best birding you’ll do by bike.

Since spring, Sandy and I have been working our way through the trails of Pine Island Conservation Area. It’s close enough to us to make a quick and easy destination, and so little known that the trails are never crowded.

She’d written about it in her first hiking book and wasn’t too thrilled with how full of Brazilian pepper it was back then. Only after we’d discovered the trails at Sams House was she interested in it again.

We’d done all but the longest trail before the weather got too hot — and the lagoon too stinky — for us to tackle any more. So on a recent cool day, she suggested she hike and I bike what they call the Equestrian Trail.

This Brevard preserve is on Merritt Island, about as close as you can get to Kennedy Space Center on its south side. We could see the Vehicle Assembly Building looming across the man-made lake that the trail circles.

The VAB sticks up above the trees along North Borrow Lake

The preserve is also directly across the Indian River Lagoon from Port St. John, right where the power lines march across the lagoon from the power plant.

We used to stare at it from our porch and wonder why there were no houses along the shoreline. We figured it was part of Merritt Island NWR, but it is south of it.

Peeking west from the trail towards pines along the lagoon

On our prior visits, we used the main trailhead. This time, Sandy suggested we use the northern once since she wanted to check out the bird blind shown on the map. While she did that, I got the bike ready and left.

It was definitely a day for a mountain bike. From the trailhead I rode north on a wide grassy strip along a long man-made lake that’s labeled North Borrow Lake on their maps.

There wasn’t a trail or beaten path to speak of, just faint tire impressions. Grass isn’t the easiest surface to ride on, as it requires constant pedaling to keep moving.

At the end of the lake I came to an intersection. To the right would take me along the other side of the lake. To the left the trail became a defined two track grass and dirt road.

Junction for the Equestrian Trail loop

It wasn’t far before I reached a trail arrow pointing left. The two track road continued straight ahead. Knowing that it was heading towards the lagoon, I decided to see if it would take me there.

Like in Scottsmoor, hog damage made for difficult riding in some spots. Rounding a bend, the path gradually narrowed and turned into a narrow footpath. 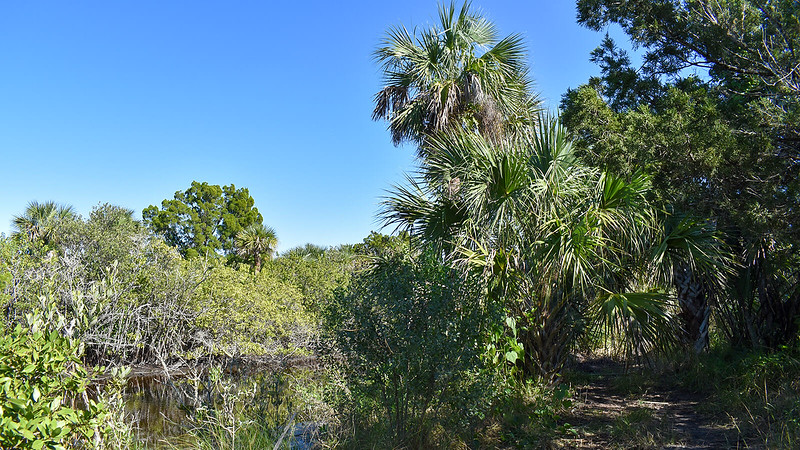 The footpath on the return trip

Riding it as far as I could, I parked the bike and continued on foot. The path took me down a narrow peninsula, dead-ending into the mangroves.

It wasn’t the greatest view, but I could see it was the shore of the Indian River Lagoon. And it stank. There were dead fish all through the mangrove roots.

Looking out from the mangroves to the open lagoon

Walking back along the peninsula, I was paying so much attention to an adjoining canal — we’d seen a dolphin in a canal on one of our previous hikes — that I walked right by where I’d parked the bike without noticing it.

After about fifty more feet, I noticed bicycle tire marks. Realizing that they must have been mine, I turned around and followed them back the way I came, panicking a little because I didn’t see my bike. 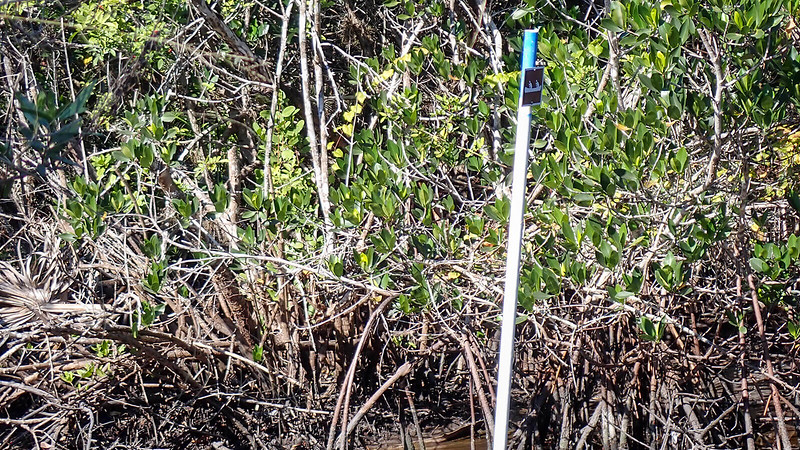 I found a paddling trail portage in the mangroves

I finally found the bike where I had safely parked it just off the trail. I’d just missed it from the other direction. I hopped on and rode back to the trail junction and took a right.

The Equestrian Trail in this direction became a long straight tunnel on a levee above the mangrove swamps. It’s probably from when Merritt Island was ditched for mosquito control long ago. 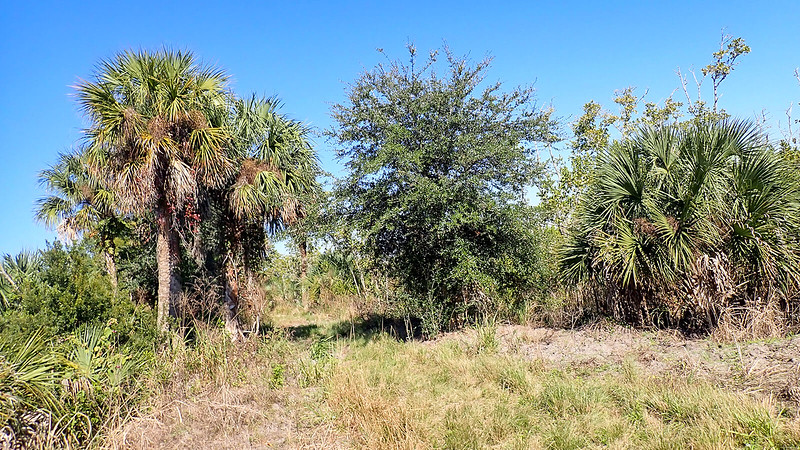 Back on the Equestrian Trail, southbound

Only the hog damage detracted from its beauty. A canal paralleled on the left, and some views opened up into the mangrove swamps on the right.

Cabbage palms, white mangroves, and a few oaks and pines had gotten a foothold on the levee itself, although there was one spot off the levee that looked like a palm hammock edged with mangroves. 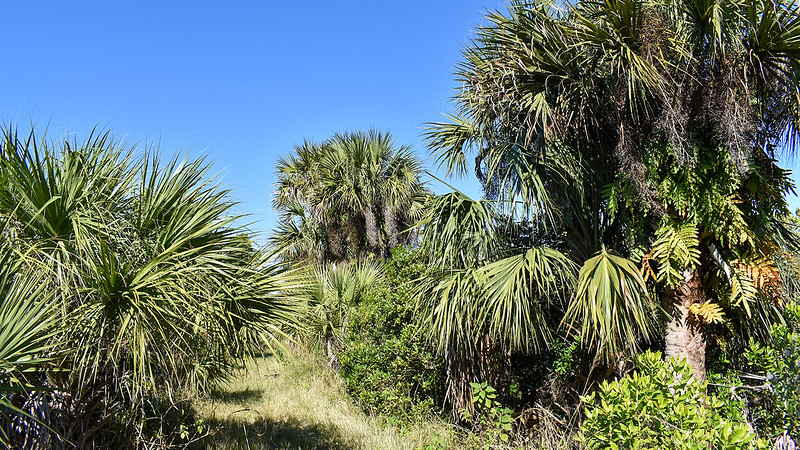 Along this section of levee

When the trail came to the main canal — the one between the pump house for the two lakes and the Indian River Lagoon — it made a sharp right turn and ran parallel with it, under the power lines.

After a while, it turned to snake between two good-sized ponds. Just as I reached the first pond I noticed a large flash of white. I didn’t see enough of it to know what it was, but it was big. 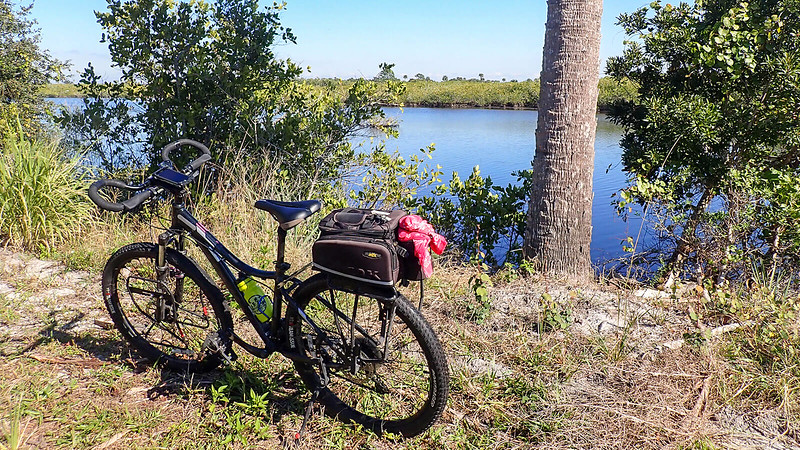 Pausing after I saw the flash of white

I dismounted and slowly and quietly continued down the trail until I got to where I could peek across the pond. There, floating maybe a hundred feet offshore, was a flock of at least two dozen white pelicans.

I stayed hidden and I watched them come and go. They are so large they are just amazing to watch as they take off and land on the water.

Pelicans doing touch-and-gos on the lagoon

As I continued, pushing my bike, I could see several young wood storks sharing the branches with egrets and herons. As I got closer they began to fly off. One or two at first, and then by the dozens.

White birds flashed past, with an occasional squawk thrown in. They’d fly away, only to return as I’d pass by. On the other side of the trail a lone buzzard shared a dead pine tree with a group of white ibis. 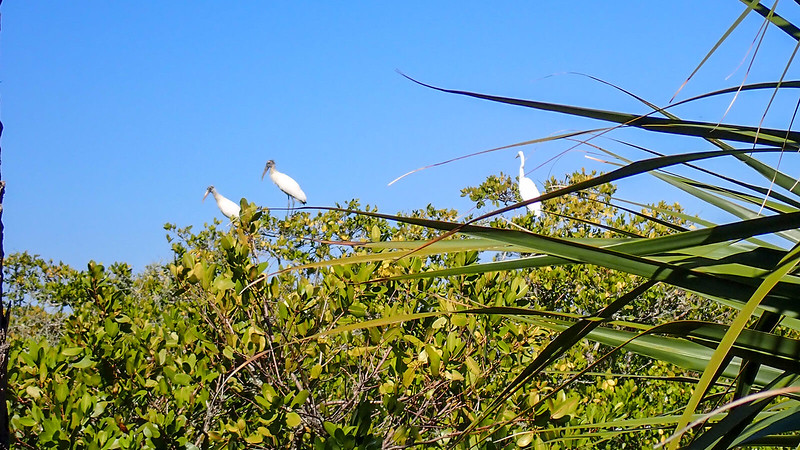 When I got over the canal bridge with its kayak launch point, the Equestrian Trail joined the main dirt road that parallels the main canal. Most of the trails in the preserve branch off it.

Riding beside the canal back to the main trailhead so I could loop the North Borrow Lake, I watched and listened to kingfishers as they rattled with their unique sound as they flew past. 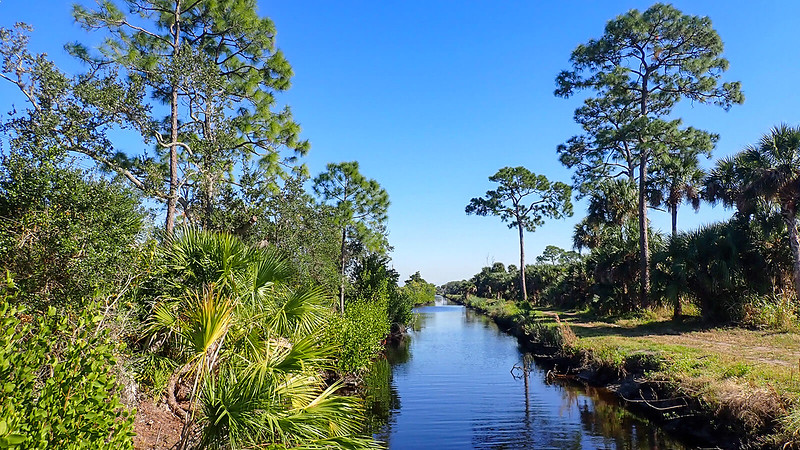 Looking east from the canal bridge

Looking up at just the right moment, I spotted a lone roseate spoonbill flying overhead, bright pink against a deep blue sky. Yes, Pine Island is a very birdy place.

Birds came and went continually along the lagoons of Pine Island