There aren’t many places where you can ride a street bike on the Florida National Scenic Trail. But the short paved section of the Palatka-Lake Butler Trail in Lake Butler is one of them.

Sandy had not walked this new section of trail since it became a shared hiking/bike path. So with her on foot and me on a bike we traveled the same path in very different ways.

The trail begins at the historic Union Depot, surrounded by a nice park one street behind the old downtown. There’s a convenience store, a Dollar General and a Hungry Howies not far away.

You ride by a few homes, industrial buildings, and businesses as you leave town, heading east. There are a few small roads, and a crossing of SR 121 near the edge of town.

Once you are out of town, the trail appears to be arrow straight until a few curves sneak in. As I ride on converted rail trails, I sometimes wonder why the old railroad did these odd jogs.

Along the route, you will notice cypress trees in the low places along the of the trail. Past the Mile 52 marker (as counted from Palatka) look closely, and you will see a few cypress trees that tower over the rest of them.

The paved trail ends after 4.5 miles as it reaches SR 237. From this road, you can see the unimproved rail trail continue straight ahead to the horizon before it disappears into thick brush.

There is a small, almost hidden sign warning hikers that the bridge is out and not to continue that way.

I started down the unimproved path until the underbrush became a little too close. I was hoping to see what was left of the railroad trestle over the New River.

Almost twenty years ago, while on his ECT hike up the East Coast, Nimblewill Nomad crossed this bridge and wrote of how it was falling apart as he was trying to make his way across.

“Just getting down to the first trestle is an ordeal as I must climb and struggle through burned rubble and brush. The river is boiling and rolling below as I first move above it and I’m jolted by the first adrenaline pump bringing much hesitancy and doubt.

I must remove my pack to move about on the pier stabilizers. Moving across the first tie beam is relatively easy, being yet intact and bolted at both ends. I pass by inching my pack ahead of me and holding it by the straps for stability.

I try to concentrate on my feet and block out the dizzying effect of the rushing water below. Here at the second pier I must now move across the lateral stabilizer as the longitudinal beam leading to the next pier is on the other side.

This second beam is scary. The burned off end is towards me and there is about a two foot gap. As I swing my pack onto it I see it sag. I try holding onto the pier piling and my pack as I straddle the abyss. As I put my weight onto the beam it creaks and sags much more. Should I commit myself to this or not?”

You can read the entire story on his web page for the Florida Trail section of his Odyssey 1998. Look about halfway down the page for the story under January 31, 1998, Trail Day 31.

I turned around and headed back to the trailhead at Union Depot, watching for Sandy’s orange shirt in the distance. I kept looking and looking.

It was a hot day and she was taking her time and taking lots of photographs. I told her where to watch for the bigger cypresses and returned to the park so I could meet her at the other end with the car.

I rode past the park just to see where the route goes. The paved trail ends past the IGA, but the grassy trail is easy to follow. It goes on until you reach the end of town. Hopefully one day it will continue all the way to Lake City.

It’s a linear ride of 4.5 miles from Union Depot to SR 237. I did it as a round-trip of 9 miles, and tagged on a couple extra miles at the end riding around Lake Butler to take a look at its downtown, historic homes, and the waterfront on the lake. 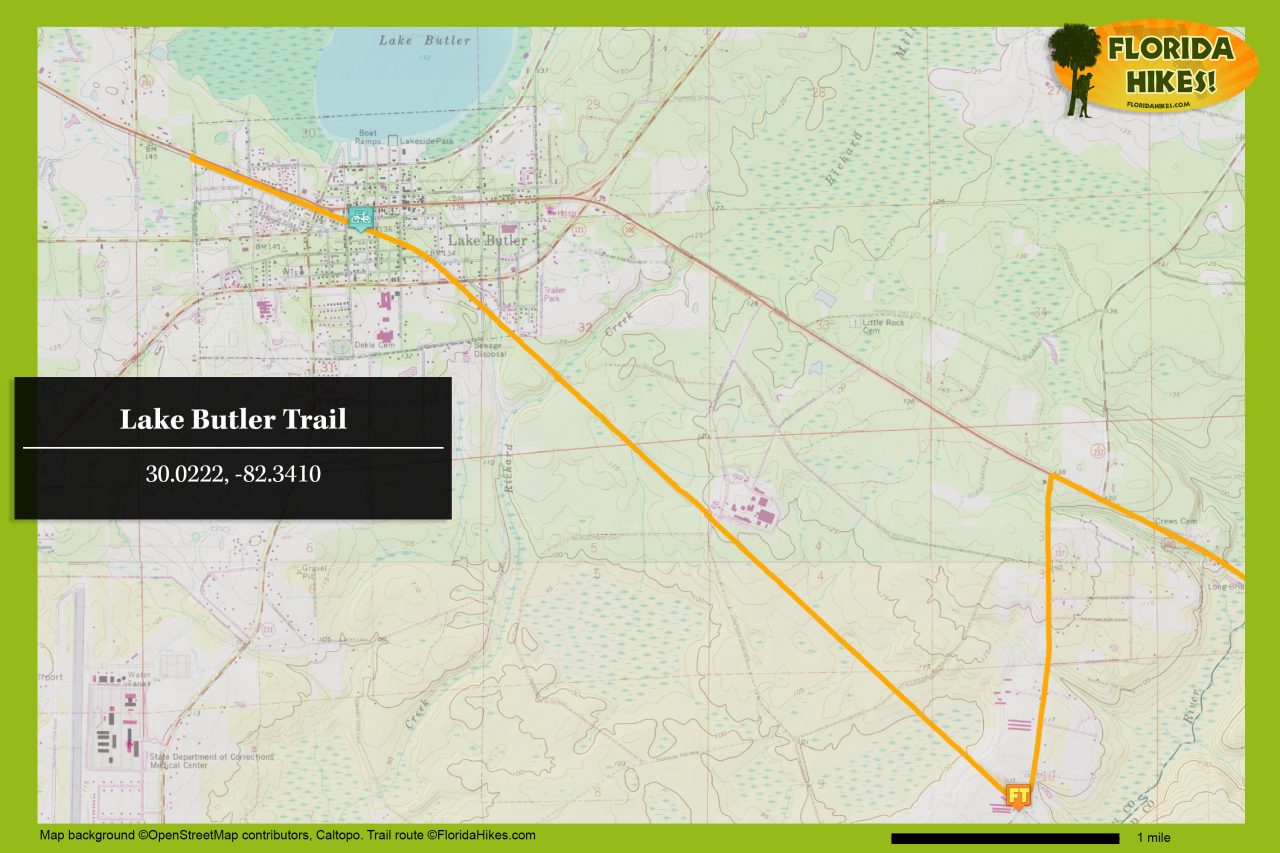