The Woodpecker Trail at Big Shoals State Park provides a 7-mile wildlife-rich round trip ride, but watch out for those puddles! John plunges in anyway to get the story.

The sign along the Woodpecker Trail said “Coming soon! Turkeys, gopher tortoises, and quail!” It said nothing about the flooded places that we’d encounter just ahead after the recent afternoon rains.

The dirt road to Big Shoals State Park was almost impassable. The ruts and dips in the road were deep enough to swallow the tire of our little Honda. We decided that it would be smarter to begin at the Little Shoals Trailhead along CR 135, which we had passed along the way.

The trailhead was just inside the gate and no trouble at all to drive to. It had a paved parking area, picnic shelter, and a privy. After pumping air in the tires of our bikes, we began our 3.5 mile ride on the paved trail, planning to go to the parking area above the Suwannee River at Big Shoals State Park, where there are restrooms and a quick walk down to the river at the canoe launch.

The golden orb spiders must know people ride this trail. Their webs were just above our heads. We rode past the big sign and a covered bench. Continuing over a boardwalk through a scenic piece of woods, we splashed through two small sections of trail where water was flowing about an inch deep and ten feet wide. Not a problem.

But then we arrived at the first water hazard. The trail was entirely flooded under dark tannic water in the pine flatwoods. With no way to know the depth of the water, Sandy waited at the water’s edge while I continued my way along the flooded bike path.

As the water reached my boots, I kept pedaling. When the tops of my boots slipped under water, I called back to Sandy not follow me. I was afraid that water’s depth might force me off the bike to push the bike through the water and I did not want her to even try. My forward motion was nearly at a stall before the water became shallower. Every pedal stroke became easier and I was able to made it across without dismounting.

Safely across the flooded path, I called back to Sandy telling her that I would quickly ride to the end so we could document this trail. I had not given any thought to there being more flooded trail sections. Around a bend I startled four deer along and on the path. They quickly disappeared into the woods before I could even think of taking a picture. I crossed two boardwalks, a bridge, and two more flooded trail sections before I reached the three mile mark and the end of my camera battery.

The trailhead was empty when I reached the end of the paved trail. At least I had a phone to snap a photo with. Just looking at the road, from here it would have been a very wet and muddy ride for a view of Big Shoals and the Suwannee River. So with Sandy waiting at the other end, I began my return.

At least I knew what the trail conditions would be on the way back, and that my feet would stay wet. Along the way, my four white deer friends walked out on the trail. They must have known that the camera battery was dead, because this time they slowly ambled back into the woods. Seeing them again, I forgot that my wet feet and just enjoyed the rest of the ride.

I met Sandy on the “dry” side of the trail. She had her own story to tell. She rode out to the trailhead and back again, then decided to wait for me at the flooded section. While standing straddling her bike, she saw something move in the water and thought about cottonmouths being in there. She looked down and there was a large black racer at her feet, intent on watching a frog at the water’s edge. She was almost stepping on it without knowing it was there.

On the way back to our hotel, we heard a loud pop and pssst sound from the rear of the car. I quickly pulled off the road. Looking in the trunk I found the front tire on the bike I had just ridden had gone, flat. At least it happened after my ride and not while I was in knee-deep water!

This is one you’ll want to ride round-trip because it’s short and the Little Shoals Trailhead is much easier to get to. It was a 7-mile round trip. Watch out for those wet spots! 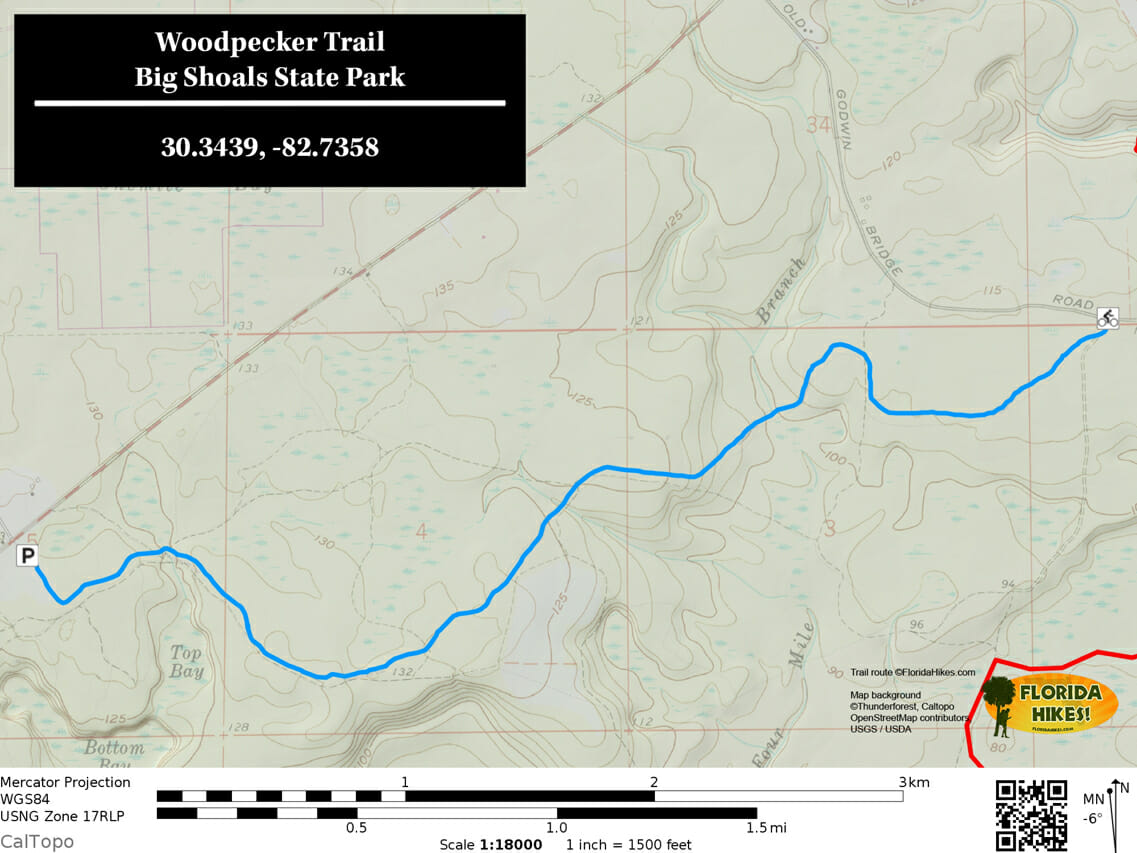