The only remaining 17th century fortress in North America, the Castillo de San Marcos defended the Spanish colony of St. Augustine from two British sieges in the 1700s.

The only remaining 17th century fortress in North America, the Castillo de San Marcos defended the Spanish colony of St. Augustine from two British sieges during the European settlement of the Americas.

Now a National Monument, it is an unmistakable Florida landmark providing a fascinating look into the past, and is built from an unmistakably Florida stone, coquina.

On 20 acres along Matanzas Bay, this stone fortress looks both mighty and small, depending on where you happen to be standing. 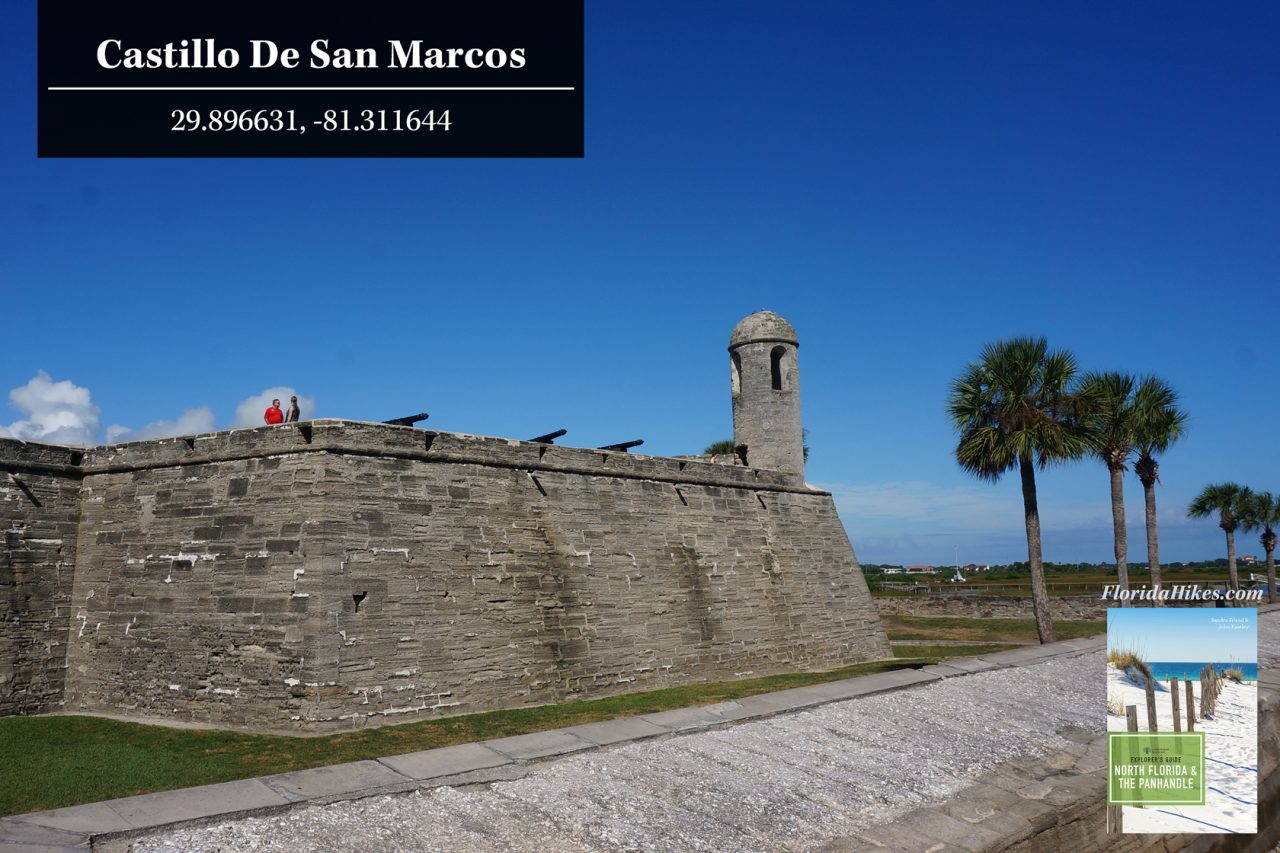 Open 8:45 AM to 5 PM daily except Thanksgiving and Christmas. Quiet in the fall months, busy in spring and on weekends. Dogs are not permitted inside but may be walked on the grounds.


From Interstate 95, follow SR 16 east to US 1. Continue south and turn left on West Castillo Dr to reach San Marcos Blvd (A1A). Turn right. The Castillo is an unmistakable presence along the St. Augustine waterfront, across from the City Gates. A small parking lot is on National Park property. If it is full, use the downtown parking garage located along Orange Street to the west of the Castillo.

Sent to the New World by the King of Spain to settle La Florida and squelch French claims on this new land – the French had already started a colony at Fort Caroline – Pedro Menéndez de Avilés landed along these shores on September 8, 1565 with more than 800 settlers.

Of course, there was already a Timucua settlement here, called Seloy. The Spanish established a mission on the site, and began construction of a fortress to defend their new city, St. Augustine. The first fortress was of wood.

Construction of a stone fort began in 1672 in response to British settlements along the Atlantic Coast to the north. The quarry from which the stone was removed can be visited today at Anastasia State Park.

Stones were 12 to 19 feet thick. The Spanish had no idea how coquina would stand up to cannon fire, but it was all they had. Surprisingly, it worked better than any other fortress material ever used in Florida.

Cannonballs from British attacks either bounced off or were absorbed by this seashell conglomerate, and remain embedded in the walls of the fortress to this day.

Both the thickness and unusual properties of the stone and the star shape of the fort, called a bastion, was an effective barrier against attack. When the British lay siege to St. Augustine twice in the 1700s, the citizens moved inside the fortress walls.

After Spain ceded Florida to England, the Castillo stayed in service, although it was renamed Fort Marion for many years. It also served as a military prison. It became a National Monument in 1942.

Kids today, just like we did when we were in school, come here for field trips. Portions of the fort are set up as interpretive displays, and other parts are left just as they were.

We have fond memories of creeping through dark tunnels to explore places like the power magazine. Living history demonstrations include the firing of antique weapons and the cannons.

The views from the ramparts are outstanding, and even a walk around the entire fort – for which there is no fee – let us watch sea turtles, dolphins, and kayakers bobbing in the swells of Matanzas Bay.

You can examine the outerworks more closely with a walk around the fort, and see how it is directly connected to the city wall and city gates on the opposite side of A1A.

Anastasia State Park is windswept and sandy, with an arc of beach that stretches four miles to Matanzas Inlet, curving in on itself to face the ancient city of St. Augustine.

A little-known chapter in Florida history is that of Fort Mose, the first free African settlement in the South in pre-Colonial America. The settlement site is preserved and interpreted at Fort Mose Historic State Park.

Circling a peninsula of land between the Guana River and the Tolomato River, the trail system at GTM Reserve is one of North Florida’s most beautiful places to hike.

Stokes Landing provides an outdoor classroom for local schools and panoramic views of the salt marshes along the Tolomato River north of St. Augustine