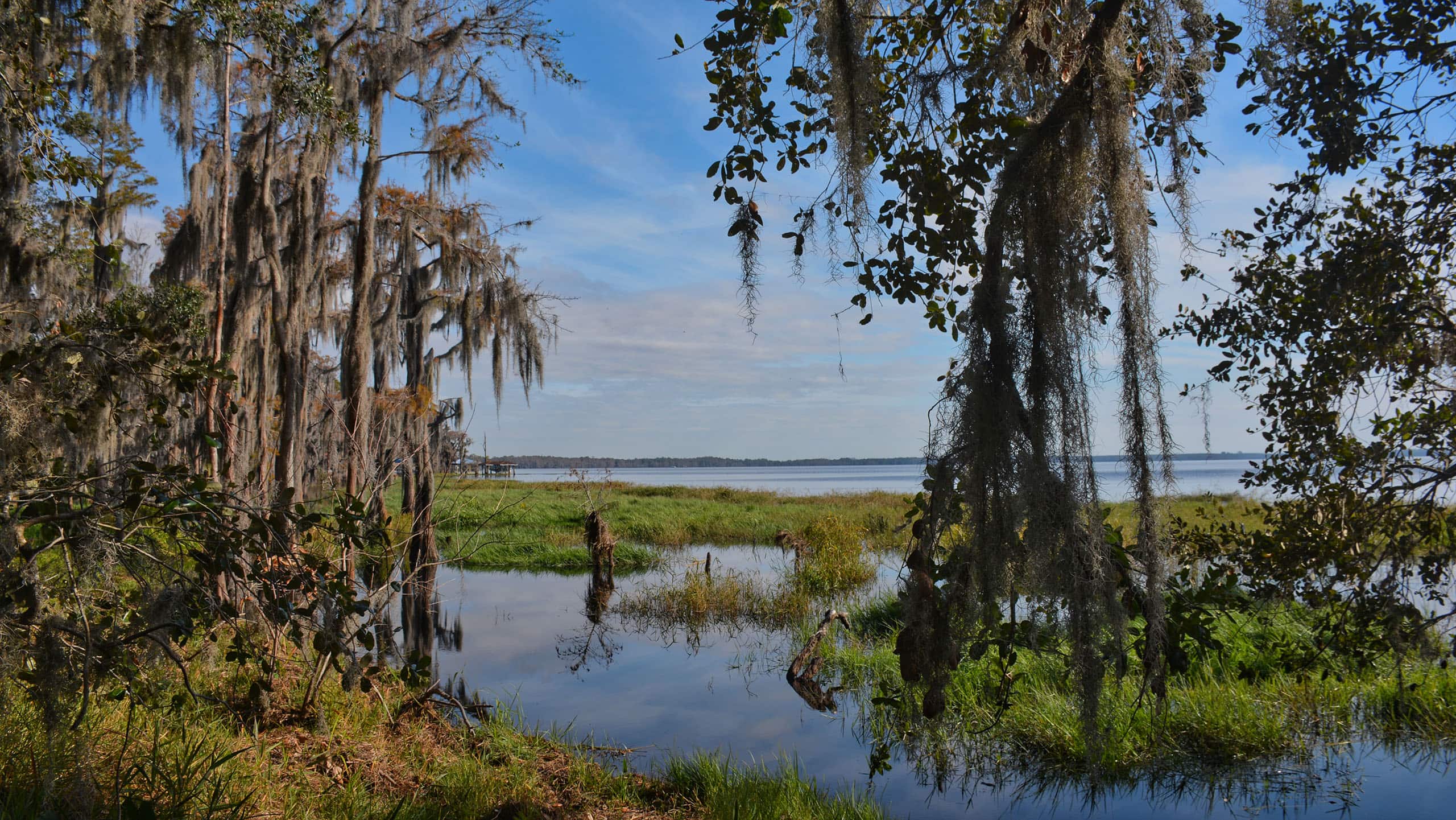 On a 1.7-mile loop, Crooked River Preserve showcases a wide variety of habitats in a short hike on the northernmost extent of the Lake Wales Ridge in Clermont

At the northernmost end of the Lake Wales Ridge, a significant landform that stretches from Minneola down towards Lake Okeechobee, creating the “spine” of the Florida peninsula, Crooked River Preserve showcases a wide variety of habitats in a short hike. The high, well-drained sandy soils of the Lake Wales Ridge were prized by citrus growers, who found them ideal for their groves. At one time, US 27 – which follows the ridge, and still gives you a good taste of the hills that make up the middle of Florida’s peninsula – was known as the Orange Blossom Highway. It was guaranteed, at least when I was growing up, that a drive down the highway with your windows down meant breathing in the sweet scent of citrus blossoms during their blooming season all winter and into the spring.

The orange groves gave way to massive residential and commercial developments over the past decade, so the preserve is tightly hemmed in by the press of development that has otherwise smothered the natural habitats of the northern end of the Lake Wales Ridge. However, Crooked River Preserve showcases not only the scrub, but takes you on a walk down to an untrammelled corner of Lake Louisa by following part of the Palatlakaha River.

Pets are not permitted. There is a kiosk at the trailhead; please check in before you hike. The land is managed by the Lake County Water Authority. For more information, see www.lcwa.org

From US 27 in Clermont, drive south from its intersection of SR 50 for one mile. Turn right on Lake Louisa Road and follow it for 2.7miles to the trailhead on the left.

Two trails – the Cypress Trail, blazed orange, working its way out to the Palatlakaha River and the shore of Lake Louisa, and the Sink Trail, blazed blue, skirting around sinkholes – make up the primary trail system through this preserve. To add a little extra to the mix, multiple side trails blazed in yellow loop or spur off the main trails to lead to points of interest. The trail markers are fence posts tipped with color.

Sign in at the kiosk at the trailhead, where you should find a map to carry along. It’s good for navigation, but on my visit, there was no scale to the map, so I was guessing we’d finish hiking before dark. We did, but just barely.

Starting out under a canopy of laurel oaks in a second or third growth forest, the trail is edged by giant mounds of grapevines. The footpath is sand, but relatively compact. A line of cypress behind the oaks defines the floodplain of the river. Interpretive markers point out specific plants and trees, like the red bay, which likes to have its roots in the wet rim of the floodplain. A tiger swallowtail settles on a patch of fleabane, slowly pumping its wings. Entering an open area with tall longleaf pines and blueberry bushes, a denuded scrub landscape off to the left, you can hear passing cars on Lake Louisa Road not far off to the left. This is a small preserve, only 64 acres, tightly hemmed in by the press of development that has smothered the natural habitats of the northern end of the Lake Wales Ridge around Clermont and Minneola.

Prickly pear and grapevines intermingle as scrub and oak hammock meet. Reaching an orange marker and a yellow marker, take the yellow trail. It swings closer to the river, affording a shady canopy overhead unlike the orange trail. It’s a crispy, crunchy tunnel of sand live oaks paralleled by a line of cypress. Through an opening between the cypress, you can see Palatlakaha River Park on the opposite shore, another public land (with hiking) protecting the watershed of the Palatlakaha River. Flowing north from the Green Swamp, the Palatlakaha River forms a chain of lakes that includes Lake Louisa and Lake Minneola, flowing north to Lake Harris. As the yellow trail meets the orange trail, turn right.

The next intersection is where the orange-blazed Cypress Trail and blue-blazed SinkTrail meet after 0.4 miles. You’ll return along the Sink Trail, so keep right. You quickly come upon another junction of the two trails. Keep right again to stay as close to the river forest as you can. Turn right at the next yellow trail to head down towards the river, with tall bald cypress front and center. You feel the presence of the river before you see it. A massive oak has an equally massive root ball where it’s split into five separate trunks, creating an octopus of a split oak tree. Catching a glimpse of the far riverbank, the sparkle of water finally breaks through the understory as the trail gets within sight of houses on the far side of the sinuous stream. The Palatlakaha River is tannic but clear and sand-bottomed, with ripples across the bottom that make the stream almost seem tidal. It’s hard to tell from this vantage point on the small bluff, but the river actually flows north. At a half mile, a picnic bench offers a place to watch for birds and savor the view as Lake Louisa gently pours through a gateway of cypresses into the river.

After watching a great blue heron spear a bluegill in the depths of a river curve, continue straight past the picnic bench to join the blue-blazed Sink Trail, a straightaway beneath tall oaks well-draped in Spanish moss and resurrection fern. Bracken fern crowds the understory. Suddenly, it’s light all around as you emerge along the cypresses on the shore of Lake Louisa. Surprisingly, the far shore is pristine, unlike the near shores with their tightly packed lakefront homes. The lake is large enough to sport whitecaps when the wind picks up, and is a favorite of local anglers. The far shore is protected by Lake Louisa State Park, a former ranch and orange groves still undergoing restoration to longleaf pine forest.

Along the sandy shoreline, watch for alligators as you marvel at the oddly-shared, almost bonsai-like bald cypress, each a short, stout sentinel proclaiming the age and wildness of this place, with trunks that are mostly hollow – typically the reason why they weren’t logged a century ago. An osprey cries as it banks through the air, scouting the lake for the strike of a fish at the surface. The imprint of a bobcat’s paws is deeply embedded in a spit of sand that snakes out into the lake.

Return to the trail and turn right to continue along the blue blazes. Southern woods fern rises tall in the shaded understory. It’s a fern that prefers dampness, and the humidity from the big lake suits it just fine. At the next trail junction, the trail straight ahead exits into a neighborhood. Turn left to follow the Sink Trail into a sandhill habitat, with longleaf pines and turkey oaks. Passing ground rooted up by an armadillo, look up and see the twisty branches of longleaf pines. Soon after, the sinkhole, rather significant in size, comes into view. A pond fills the bottom. Sinkholes commonly form in high, well-drained soils like the sand of the Lake Wales Ridge, especially where there are many oak trees. The word “karst,” which describes the underlying bedrock full of holes like a sponge, is derived from the Czech word for “oak tree.” The tannic acid that leaches from oak leaves accelerates erosion in karst. When a cavity beneath the surface erodes to the point it weakens, a sinkhole forms as the cavity collapses in on itself.

Leaving the sinkhole, turn left at the base of a tall longleaf pine tree – it has its own interpretive marker. The trail sweeps down to follow the rim of the sinkhole behind a screen of vegetation. Young longleaf pines, at least 20 feet tall, shade the path as the trail continues to provide more vantage points across the sinkhole. Scrub habitats are emerging to the right. Enter the shade of an oak hammock at 1.1 miles. At the trail junction, turn right. You pass another junction on the right a few moments later. Keep to the right, and you’re back on the orange blazes, following the perimeter of the preserve into its other highlight, the ancient scrub. The scrub of the Lake Wales Ridge is characterized by bright, almost power-white sand which hosts a variety of woody shrubs and lichens. It is some of the oldest land in the Florida peninsula, teeming with biodiversity and species found nowhere else on earth–which is why this little patch means so much amid the sprawl that now surrounds it.

In one spot, the open scrub is covered with sandspike moss, looking like slender fingers rising from the sand. Notice the “scrub olive” marker, indicating a native olive species that only grows in this well-drained sand. It sports small but fragrant flowers, and fruits that are larger than the wild olive found commonly throughout Florida.

The hill trends downwards towards Lake Louisa Road, as does the trail, drawing close to the fenceline. The sand gets softer, the walking more difficult. You can see the line of cypress in the distance after the trail leaves the fenceline and makes a sharp left into the scrub. Open patches of scrub with diminutive plants are all around you, including more patches of spike moss. Reaching the final trail junction at 1.6 miles, turn right to exit down the grapevine-lined corridor. Don’t forget to sign out at the trail register! 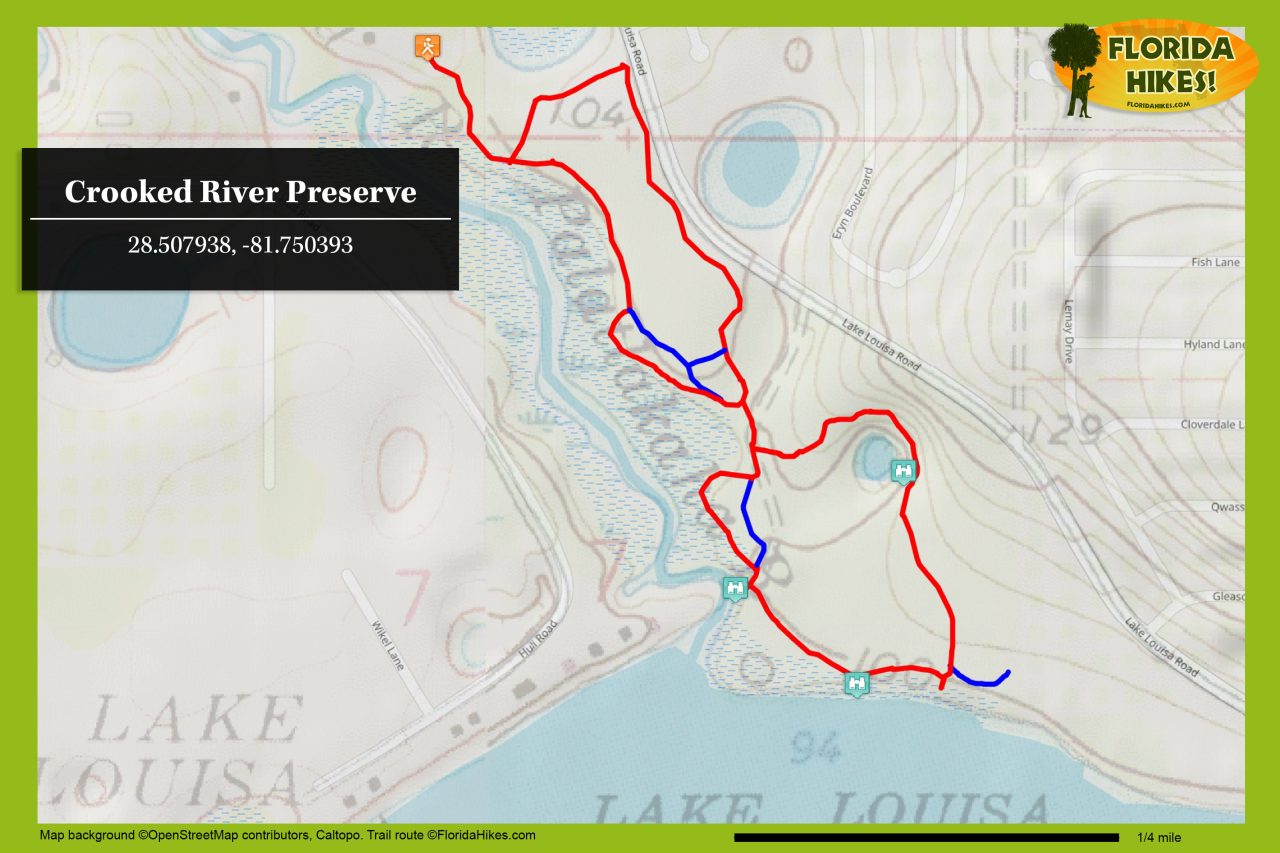