One of several nature preserves along the west side of Atlantic Beach, Dutton Island Preserve encompasses a forested island in the San Pablo River estuary south of the St. Johns River.

On older maps, it’s called Pine Island, and it’s easy to see why once you arrive. Tall, skinny slash pines rise well above the coastal hammock that tops the island.

Prior to becoming a park, the island was owned by the Dutton family but never had a house on it. Mr. Dutton, who sold the island to the city, once bred shrimp here in shallow ponds that have since been filled in.

While managed by the City of Atlantic Beach, a portion of the preserve is a City of Jacksonville Preservation Park called Dutton Island Expansion Park.

It acts as a gateway to Dutton Island. It provides additional parking and a 1.2 mile hiking trail while preserving a forested shoreline in Atlantic Beach

Open from 8 AM to dusk. Hours posted at entrance. Gates locked at hour posted.

Leashed dogs welcome. You will want mosquito repellent on all but the windiest and coldest days.

While surrounding waters are brackish, alligators still live in them. Be cautious of the grassy edges of the island. 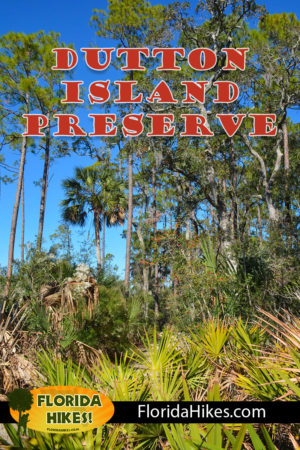 
From Interstate 275 on the east side of Jacksonville, follow US 90 for 8 miles to the Jacksonville Beaches. Exit onto Mayport Rd north towards the Naval Station. After 0.8 mile, turn left on Dutton Island Rd W. Continue 0.6 miles, where you’ll see the landside trailhead on the right. You can walk or bike out to the island from here, adding 1.1 miles to your hike or ride.

Otherwise, continue west along Dutton Island Rd as it narrows to a single lane on the causeway through the estuary. People driving out to the island have the right-of-way but anywhere you meet a vehicle, be cautious. The road widens after 1.2 miles from Mayport Rd at a small rounded parking area. Park along the edges. A one-lane road leads into the interior of the island to the kayak launches and campsites on the island.

Since we visited Dutton Island Preserve to take a hike, we were surprised to discover it is a popular destination for camping, paddling, and fishing as well.

A bike path parallels the the one-lane road along the causeway between the two trailheads, enabling cyclists and hikers to put on extra mileage, and for the local community to access the park.

The forest roads throughout the island can be biked as well. Although they are sand, they are generally hard-packed and form a network connecting all of the campsites on the island.

At first we thought the camping on the island was just for groups, but later discovered that five of the dispersed primitive sites can be reserved by anyone 21 years or older.

The sites have no water, electricity, or restrooms. What they do have are picnic tables and fire rings and a surprisingly beautiful setting for an urban area.

Central picnic pavilion near the restrooms

Restrooms and a water fountain are provided in a central location at the picnic pavilion in the middle of the island, but you should plan to bring your own water.

Sites can be driven to on the forest road network. Call the City of Atlantic Beach in advance to obtain a permit.

Sites cost $25 per night plus tax to reserve. It appears one separate area at the south end of the island is reserved for youth groups.

Campsite 1 at the northwest end of the island

There are kayak launches at both ends of the island that can be reached by driving the central north-south forest road.

The launch at the south end has more parking. The one at the north end of the island has a slip-in launch off the pier.

Slip in launch on the fishing pier

Both launch points are adjoined by piers that provide excellent views of the estuary.

A signposted paddling trail extends from Dutton Island to the south end of Atlantic Beach to a landing at Tide Views Preserve, passing through 350 acres of marshes and islands called River Branch Preserve.

Edge of the estuary along the east side of the island

Paddlers should be aware of the tides before putting in, as many of the tidal creeks go dry at low tide.

Since it wasn’t obvious where the trail began, we followed the forest road directly from the parking area into the interior of the island.

Interpretive signs cover local history and flora on the island, and were placed here by the local Boy Scout troop and the Rotary Club of Jacksonville Beaches.

Walking up past the restrooms and picnic pavilion, we saw a gap on the other side of the forest road.

That led to the footpath that rings the island’s edge, as well as an observation deck looking west.

View of the San Pablo River

Made of marl and a little mushy in places, the footpath sticks close to the marshes along the island’s western shore.

A thicket of coastal hammock fills the understory, with yaupon holly and cabbage palms predominating.

There are open spots where you can catch a glimpse out to the San Pablo River between the Southern red cedars.

In the winter months, the sea myrtle is topped with white blooms that look like fluff and attract butterflies.

Walking along the marshy west shoreline of the island

The interior thicket between the trail and the forest road is very dense, but then you come to an opening.

Walk right up to Campsite 1 and past it. Two tent platforms sit under the pines, with a picnic table and fireplace in a small pavilion.

The walk along it out to the observation deck is well worth the estuary views, which stretch in three directions.

Observation deck at the north end of the island

Follow the left branch of the boardwalk back to the loop trail and into the forest, which is sparser on this side of the island.

A side trail leads to a pond that was part of Mr. Dutton’s shrimp raising operation. You can see another Campsite 4 just off the trail, facing the forest road.

The trail leads to an access point to a boardwalk with another observation deck, this one facing the far shore of the preserve.

This is a good birding location, as we saw a pair of hooded mergansers and some herons from this perch.

The trail continues along the estuary south from this observation deck, winding through the pines, oaks, and cabbage palms.

It crosses the access to Campsite 5 and another short stretch of forest before emptying out into a forest road.

This forest road is gated at the parking area so no one drives up it. The trail empties out where you began.

That’s only the northern arc of the 1.6-mile loop around the island, which was all we had time to do that day, slightly less than a mile.

If you consult the map, the southern part of the island can be explored by connecting three pieces of trail with the forest roads.

The views, the birding, and the interpretation along the trails around the island make for an interesting hike.

Looking southeast from the island

As we were with friends and none of us were aware that Dutton Island Expansion Park had its own hiking trail, we’ll have to add that hike in the future.

Habitats are similar along this forested peninsula in Atlantic Beach.

The 1.2 mile hiking trail runs through this forested peninsula across from Dutton Island

Along the meandering, estuarine San Pablo River, Castaway Island Preserve is a breezy spot to get away from the city and enjoy a breath of fresh air on a nature trail

With cool ocean breezes and a plunge in the surf after your hike, the 2.7-mile hiking loop at Kathryn Abbey Hanna Park in Jacksonville is a great choice for a summer outing