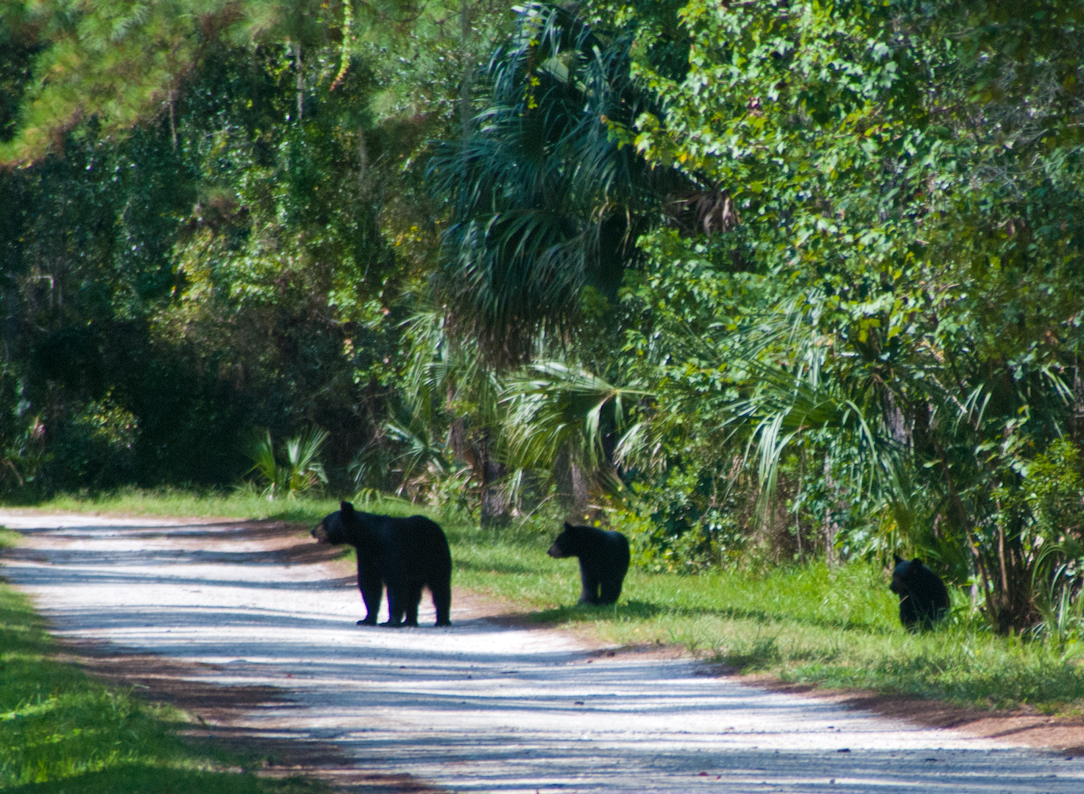 A subspecies of the Eastern black bear, the full-grown Florida black bear rarely tops 350 pounds, and will quickly move out of your way if it sees or hears you – unless it’s become used to feeding on campground or home garbage.

A subspecies of the Eastern black bear, the full-grown Florida black bear rarely tops 350 pounds, and will quickly move out of your way if it sees or hears you.  That is, of course, unless the bear has already been hanging around a campground or trailhead raiding the garbage. The Wekiva River basin, which connects to the Ocala National Forest, has become a hot spot for human/bear interactions. In the past few years we’ve seen eight while hiking or driving through the area. In the Ocala National Forest, bear sightings are very common both along the roads and on the trails.

In 2013, we had an uncomfortable encounter with a bear not far from the Markham trailhead of the Seminole-Wekiva Trail, in the Wekiva River basin. It sat down in the trail and stared at us, despite the noise we made, and followed us as we retreated.

Later that year, a woman was attacked and mauled by a bear not far from the spot where we had that encounter. It was the first known bear attack in Florida and was the result of the person getting between the bear and its cubs.

Bears tend to be most active at dawn and most commonly seen browsing patches of blueberries and blackberries in fruit.   You’ll often see bear scat and torn-apart stumps and logs in places where they roam.

It is now necessary to bear-bag your food when backpacking – or use an approved bear canister – in all three National Forests in Florida. It’s smart to do so in St. Marks NWR as well, if you’re backpacking the Florida Trail through that area, and in Seminole State Forest as well.

When camping in the National Forests or in the Wekiva River basin, keep your food in the trunk of your car. Do not leave it out at your campsite.