In a long-term effort to nudge the Orlando corridor of the Florida Trail closer to suburbia, discontinuous federally-designated fragments of trail east of the airport offer enjoyable day hikes.

Largely developed in the 1980s and 1990s, the Orlando section of the Florida Trail roughly follows the St. Johns River floodplain in a long arc from Bull Creek north.

For close to a decade, an effort has been underway to move that corridor closer to the edge of metro Orlando, largely to eliminate the 30-mile roadwalk from Bull Creek through Deseret Ranch.

The public lands and trails we list below are all part of this new corridor, but very few of them interconnect.

Exceptions are the corridor between Split Oak WEA, Moss Park, and Crosby Island Marsh Preserve, and the connectivity from Hal Scott Preserve through Pine Lily Preserve.

At the present time, there is no viable roadwalk between other trail segments due to major highways and private lands blocking a north-south route.

Radical relocations of trail corridor such as these bring a whole host of problems, particularly as subdivisions sprawl farther across the region.

Filling the gaps between existing lands is costly and difficult during periods of high market value, and existing infrastructure can cause headaches. 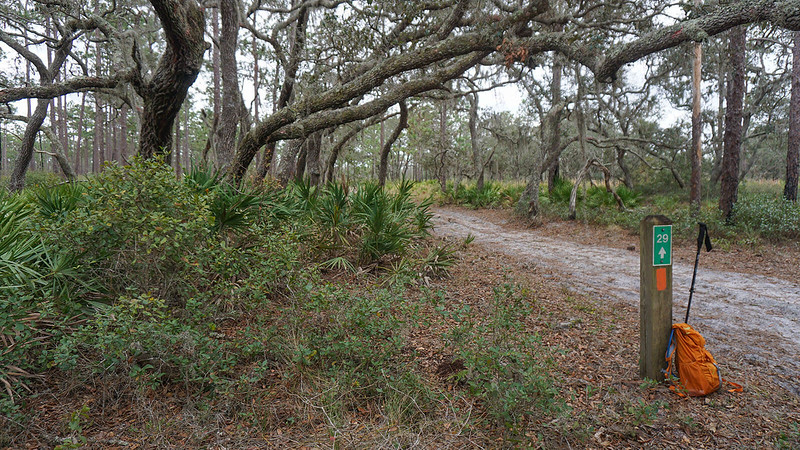 For this planned corridor, one of the biggest issues is getting across Toll 528, the highway connecting Orlando and Cocoa Beach.

At the present time, it is not at all possible to roadwalk between Crosby Island Marsh Preserve in Lake Nona and Hal Scott Preserve in Wedgefield.

Nevertheless, a persistent effort has been underway to clear, blaze, signpost, and designate trails on public lands in Osceola and Orange County as the Florida National Scenic Trail. 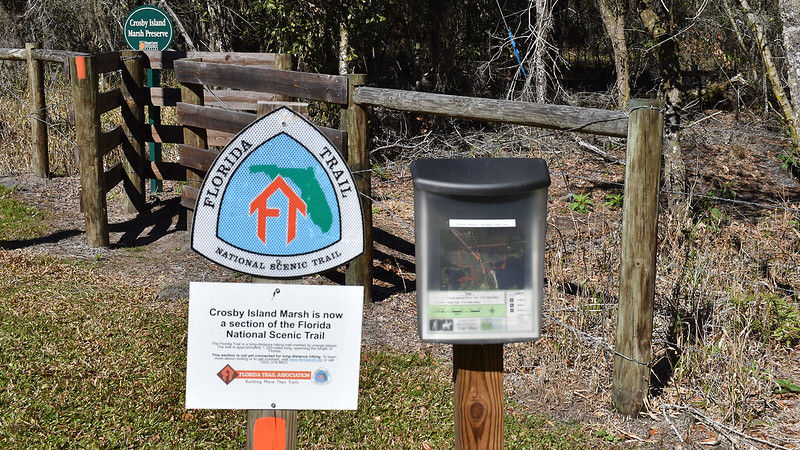 The lands and trails listed below, south to north, are all a part of this future Florida Trail corridor. At the south end, it diverges from the existing route from the hunt camp at Bull Creek WMA.

At the north end, connectivity will occur through Orlando Wetlands Park to Bronson State Forest. Both Tosohatchee and Seminole Ranch will end up bypassed entirely.

While no orange blazes exist south of the Red Loop in Hal Scott Preserve, blazes lead from the northeast corner of that loop to the trail system at adjoining Pine Lily Preserve.

Vast pine savannas and pitcher plant bogs await at one of the toughest loop trails in the Orlando area a 7.5-mile challenge at Triple N Ranch WMA.

A live oak tree more than 200 years old is the centerpiece of Split Oak Forest, a 2,000-acre prairie and scrub preserve near Orlando, home to families of sandhill cranes

Traversing the marshes that exchange waters between Lake Hart and Lake Mary Jane, the Swamp Trail is an easy hike between Moss Park and Split Oak Forest.

On an isthmus between floodplain marshes in eastern Orange County, Crosby Island Marsh Preserve provides an easy walk through a ribbon of sandhill habitat.

At Hal Scott Preserve, enjoy vast prairies and seepage bogs, the Econ River, and camping under a live oak canopy—all within minutes of the Orlando International Airport

In every season, wildflowers are the highlight along more than 4 miles of trails at Pine Lily Preserve, where its namesake lilies bloom in late summer.

Protecting more than a thousand acres, Savage Christmas Creek Preserve east of Orlando has more than 8 miles of trails through panoramic prairie and pine flatwoods landscapes

For a hike filled with the flutter and squawk of birds about their daily routines, Orlando Wetlands Park is one of the best birding spots in the state. This 5-mile loop showcases our favorite route

Learn more about the existing Orlando corridor of the Florida Trail

148.0 miles. Spanning from the Ocala National Forest south through the prairies of Osceola County, the Orlando section of the Florida Trail encompasses the eastern suburbs of the Orlando metro

At Seminole Ranch Conservation Area in Christmas, the Florida Trail follows a linear 4.9 mile route through a string of hydric hammocks in the St. Johns River floodplain

The comprehensive mile-by-mile guidebook to planning section and thru-hikes along the entire length of the Florida Trail. 356 pages, $19.95 + tax and shipping.

Fifty of the best day hikes, overnights, and weekend trips on the Florida Trail, plus nine of the best section hikes. Full hike descriptions and maps, full color. 376 pages. $24.95 + tax and shipping.

Our virtual walk along the length of the Florida Trail, covering more than 1,500 miles from the Everglades to Pensacola Beach. Hardcover, 196 pages. $24.95 + tax and shipping.
Order Now

Our history of the first 50 years of the Florida Trail, from its founding in 1966 to becoming a National Scenic Trail to volunteer efforts today.
Learn More