Roam an impressive, interpreted Third System fortress on the Florida coast along this walking tour that makes a circuit of the interior of Fort Clinch.

Dominating the outflow of the St. Marys River into Cumberland Sound and the Atlantic Ocean, Fort Clinch was built for Florida’s coastal defense.

At the time the original compound was built, Fernandina Beach was a thriving Southern port troubled by both piracy and invasions. Five flags fly over the colonial city.

View of the fort and Cumberland Sound from the ramparts

An architectural gem, it incorporates elements typical of Gothic European fortresses, such as flying buttresses and hexagonal archways.

Spiral staircases seem to hang in place, and dark tunnels lined in brick invite inspection by the curious.

While construction started in 1842, the fort was not completed until 1867, even though it was garrisoned during the Civil War.

It also served the country’s defense in the Spanish-American War. However, the United States armed forces sold it as surplus property in 1926.

Thankfully, it was not torn down by the developer who bought it, and came into state ownership in 1935.

Laborers from the Civilian Conservation Corps worked for six years on its renovation, up until the outbreak of World War II.

Dining quarters inside the garrison

As the centerpiece of Fort Clinch State Park, the fort’s role is now to interpret the past.

In doing so, it introduces you to an architectural style that is breathtaking in both its grandeur and its simplicity.

Peering through a gun hole to the outside of the fort

Park open 8 AM to sunset daily. Pets are prohibited within the walls of the fort.

This tour is self-guided, but you are welcome to join an ad hoc group if you see one gathered around a re-enactor.

On certain weekends during the year, the fort is fully garrisoned by either Confederate or Union regiments. 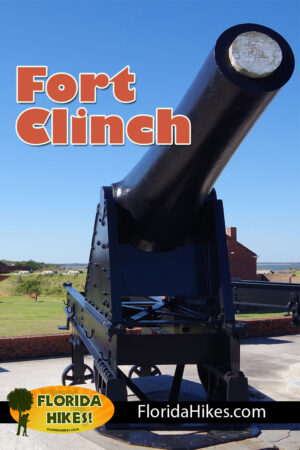 
From Jacksonville, follow Interstate 95 north for 20 miles to exit 373. Head east on SR 200 / A1A (Buccaneer Trail) for 10 miles, passing through Yulee and crossing the Intracoastal Waterway into Fernandina Beach on Amelia Island. Continue 2 miles as A1A curves north and merges onto South 8th St. Continue north on South 8th St for 3 miles to Atlantic Ave and turn right. Head east on Atlantic Ave for 1.5 miles. The entrance to Fort Clinch State Park will be on your left. After you stop at the ranger station and pay your park entrance fee, continue 3 miles along the main park road to the parking area at the Fort Clinch Visitor Center.

From the parking lot, walk up to the museum and bookstore and pay the $2 per person admission before entering the grounds of the fortress.

Savor the strong sea breeze as you walk across the open area leading up to the moat, and imagine walking back into 1864.

The drawbridge over the moat

As you cross the drawbridge and enter the fort, the smell of wood smoke fills the tunnel.

Civil War-era re-enactors roam the fort, leading groups on tours or just going about their duties.

A Union soldier explains how laundry is done

Emerging from the tunnel, notice the building right in front of you, the storehouse and dispensary.

The brown brick structures around you are the original portions of the fort; the remainder was added from 1864 through 1867 by Union regiments and the Army Corps of Engineers.

The lighter colored brick was in place before the Civil War

Following the Third System design of fortress building, Fort Clinch has a two wall fortification: one masonry, one earthen. Gun batteries stand on the masonry walls.

Third System fortresses such as Fort Clinch were designed as a coordinated system of coastal defenses along the southern coast of the United States in the aftermath of the War of 1812.

A panoramic view of the fort’s interior

Walk counterclockwise around the buildings, and peek into the open interiors to see how the garrison lived.

As you walk around the enlisted men’s barracks, notice the grand pillars on the back of the building.

A jail cell is part of the garrison quarters

Continue past the well and turn left into the long brick tunnel to access the southwest bastion of the fort.

Within this tunnel and bastion, you’ll see the very unique architectural details that make Fort Clinch a national treasure, some keen masonry tricks for roof support. 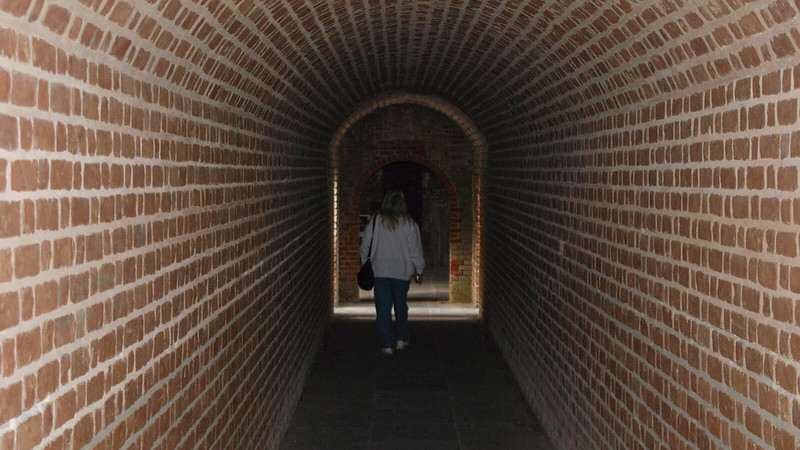 These include flying buttresses, vaulted archways, and hexagonal archway systems, with bricks facing downward in the ceilings in some of the tunnels.

Notice the gothic pentagonal ceiling inside the bastion, eliminating the need for a central pillar.

Brickwork making up the pentagonal ceiling

Climb up the extremely narrow winding granite staircase to emerge atop the bastion, where you take in a sweeping view of the fort and Cumberland Sound.

As you leave the bastion, turn left, walking out on a wooden staircase to access the earthen ramparts.

View of Cumberland Sound from atop the walls of Fort Clinch

The guns are mounted on granite blocks atop a tabby (oyster shell and mortar) wall that tops the earthen impoundment.

As you walk along the wall, listen to the slap of waves against the jetty, and feel the sting of salt air in your face. 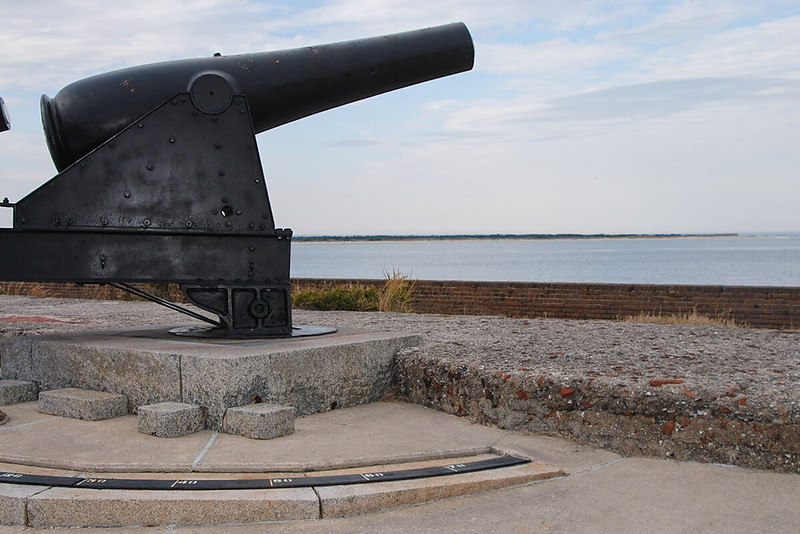 One of the many restored guns atop Fort Clinch

Beyond the Spanish bayonets, a staircase leads down to a dark chamber, another bastion at the very mouth of the river.

Descend and investigate, exploring the gothic architecture that looks out on the river and the beach.

Descent past Spanish bayonet to a hidden chamber

As you leave, turn left to walk along the inside of the exterior scarp. You feel blasts of cold sea air as you pass each gun hole.

When you reach the staircase, turn right, and climb back up to top of the ramparts for a great view down the sweep of the beach along the Atlantic Ocean.

View of the fort and Atlantic Ocean beach from the ramparts

Walk down the broad ramp to the inner courtyard. Turn right, and check out the quarters tucked into the inside wall—the powder room, the laundry, and the medical quarters.

Cross the open green back to the last building flanking the entrance, the guard room.

Supplies inside the Quartermaster’s quarters

When you leave the fort, continue back to the museum and take a look at the exhibits explaining the history of Fort Clinch, if you did not do so before your tour.

After an hour or so of exploring, you’ve completed a 0.6-mile walk.

An outstanding example of mid-1800s craftsmanship

Tackle two nature trails totaling less than a mile to discover a wildlife haven amid the forested dunes of Fort Clinch State Park.

Explore a wave-tossed beach shoreline while searching for sea shells along the northernmost stretch of the Atlantic Coast in Florida.

Extending the length of the peninsula defining the north tip of Amelia Island, the 5.7-mile Main Loop is surprisingly hilly and challenging.

See our photos of the interior of Fort Clinch

At Fernandina Plaza State Park, civilizations have made their mark here for more than 4,000 years, with the Spanish touch reaching these shores in the mid-1600s. This unassuming open space marks the spot of Plaza San Carlos, a parade ground for the fortress that protected a fledgling city known as Fernandina.

Home to the largest dune system on the Atlantic Coast in Florida, American Beach has a rich history as a vacation destination that served the African-American community during the days of segregation in the South.

John Muir Ecological Park in Yulee connects you to an important and mostly forgotten chapter of Florida history: our role in John Muir’s “Thousand Mile Walk to the Gulf.”

Northeast of Jacksonville in Fernandina Beach, Egans Creek Greenway is a protected area of over 300 acres that runs north to south along Egans Creek.