At the site of the original French settlement in Florida, explore the rich natural and cultural history of the region at the Timucuan Preserve visitor center, Fort Caroline, and its interpretive nature trail.

Three years before the Spanish colony at St. Augustine took root, French Huguenots landed on the St. Johns Bluff and claimed Florida for France, naming the river “The River of May,” as they landed on May 1, 1562. More than 200 colonists established a settlement near the bluff. They built Fort Caroline for their protection, establishing the first European colony in Florida. What few glimpses into Florida’s early colonial history we have come from Jacques Le Moyne, an artist who joined the colony two years after its founding. His depictions of Florida’s natural wonders and the Timucuan culture are an irreplaceable record of early Florida.

Le Moyne was one of the fortunate ones who survived the slaughter of the colony by troops led by the founder of St. Augustine, Don Pedro Menendez, who wasn’t pleased that the French had a foothold in the Americas and retaliated against a mission by Jean Ribault, the founder of the French colony. Le Moyne and 50 others, mostly women and children, sailed home to France, leaving the New World behind and the wilds of Florida a memory.

Open daily 9-5. Stop in the National Park Service visitor center for an overview of the colony and an understanding of the Timucua people before you start the hike.

From SR 9A, use the Southside Connector exit to follow Fort Caroline Rd 4.3 miles east. It turns turns left at Mt. Pleasant Rd. Continue 0.3 mile. The Fort Caroline entrance is on the left. At the end of the road is the Ribault Monument on the St. Johns Bluff, worth a detour for the view and historical significance. This is a replica of the monument that the French colonists erected, and later noticed the Timucua leaving offerings at the monument.

0.0> The trail starts on the west side of the visitor center, paralleling the St. Johns River.

0.1> At the fork, stay to the right, following the “Fort” sign; tall live oaks shade the trail. The trail swings around to a view of the St. Johns River. At the next junction, keep to the left to pass an interpretive exhibit of a Timucuan village with a hut, a garden, and a midden. Jacques Le Moyne recorded a wealth of information about the now-vanished Timucuan culture through his detailed sketches.

0.2 > As you come up a rise, you reach a trail junction. Ahead of you is a replica of Fort Caroline, its original location lost to the shifting river sands over the centuries. Take some time to explore the fort before you start down the nature trail. The replica is based on the paintings of Jacques Le Moyne—a small earthen fort, edged on its sides by wooden walls.

0.3 > Leaving the fort, turn right to start down the trail, and pay close attention to the interpretive markers. You see a lot of witch hazel in the understory, not commonly found in Florida but present in the maritime hammocks of the northeastern coast.

0.4 > Passing a bench, the trail turns left and heads uphill under a shady canopy of oaks. Peeking through the trees on the right, you can see patches of salt marsh scattered through the forest.

0.5 > Cross the salt marsh on a bridge before walking through a tall stand of twisted rusty lyonia, also known as “crooked wood” to folks who work in forestry in Florida.

0.7 > At the gate, a “Nature Trail” sign points left and uphill, past a bench on the right. The trail drops steeply downhill, winding through a hardwood hammock and another bench. The habitat transitions to pine forest with an understory of saw palmetto.

1.0 > You reach another bench at 1 mile, with a “Nature Trail” sign. Turn left. The trail drops through a low spot filled with ferns. At the T intersection, turn left at the signs, then right to head back towards the visitor center.

1.2 > Return to the visitor center to complete the hike. 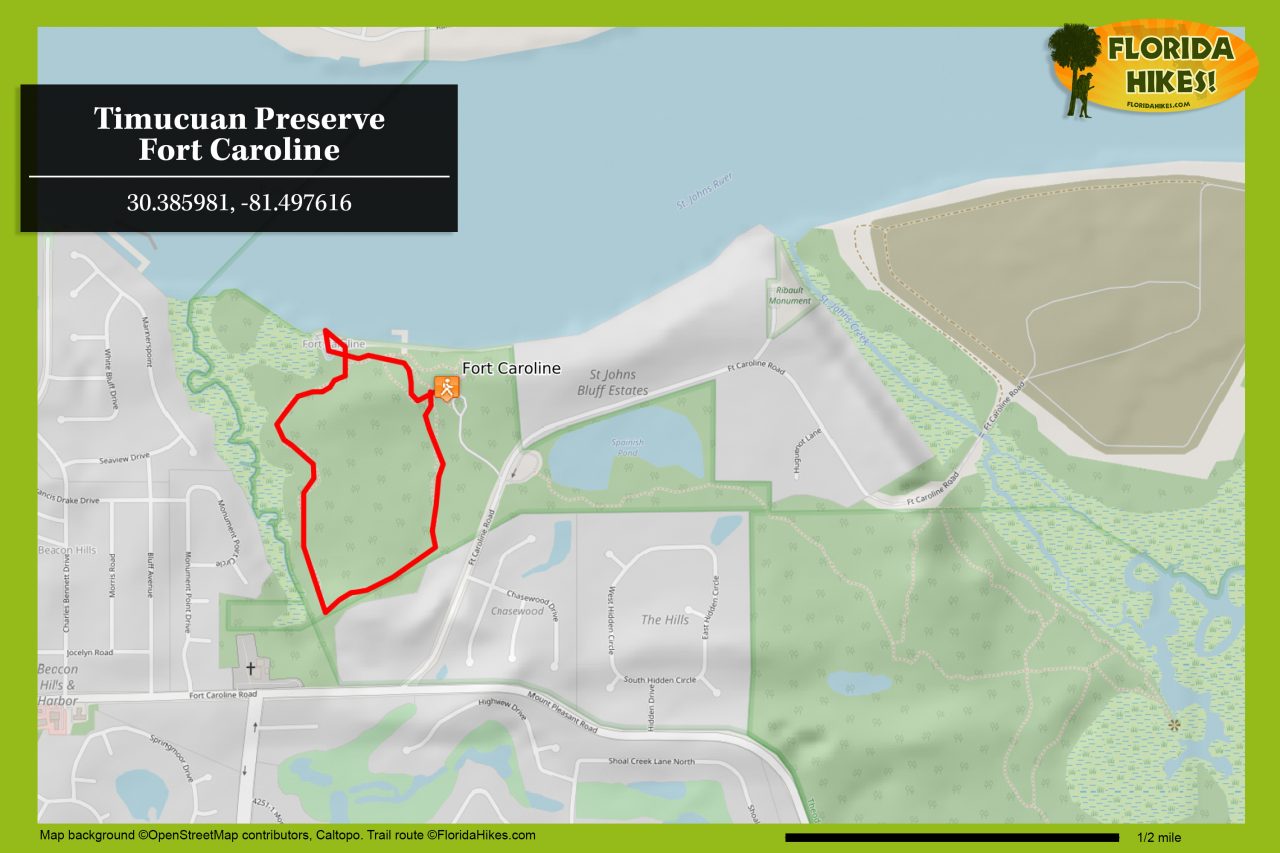