Protecting a string of beaches along the Gulf shore of Boca Grande on Gasparilla Island, this far-flung outpost of Lee County is home to one of Florida’s most delightful lighthouse museums

CLOSED indefinitely due to damage from Hurricane Ian.

The state park occupies the tip of the island as well as a sweep of oceanfront along the Gulf of Mexico fronting the community of Boca Grande.

Deep water in Charlotte Harbor attracted industrialists to Gasparilla Island in 1905 to develop Boca Grande as a railroad terminus for shipping ore.

The ore? Phosphate. Starting in 1911, it was shipped from mines along the Peace River down the Charlotte Harbor and Northern Railroad.

A two-mile trestle from Placida crossed Gasparilla Sound to the island. At the phosphate docks, ore cars were poured into the open holds of freighters.

In 1911, the Gasparilla Inn was built as a railroad hotel. Now one of the last of its era, it attracted well-to-do city folks to Boca Grande for the balmy winters.

Open daily 8 AM to sundown. Pay at the iron ranger at the first stop you make and put the hangtag on your rearview mirror for the remaining stops.

While leashed pets are welcome, they are not permitted on beaches. When beach walking, avoid areas marked off as sea turtle nests.

Mind all warning signage about water dangers. Do not swim in or launch kayaks into Boca Grande Pass, where Charlotte Harbor flows into the Gulf of Mexico. 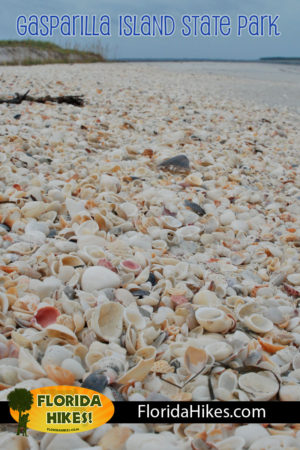 It’s hard to believe, after driving through Boca Grande, that this park occupies what was once a bustling commercial seaport, Port Boca Grande. Especially when you see the view across the pass.

Encompassing 127 acres at the southern tip of Gasparilla Island, this is a state park with more to it than meets the eye. Most people come here for the beaches, of course.

Shore fishing is big thanks to the unique location, and the shelling here is simply amazing after a storm blows through.

Up until 1979, this was an active commercial shipping port just like the Port of Tampa. That’s where the phosphate companies moved their operations after abandoning Boca Grande.

Two of the former industrial sites – the seawall and the location of the fuel oil storage tanks – have been turned into upscale condo communities.

The remainder of the waterfront was gifted to the state of Florida, and is now Gasparilla Island State Park.

Visitors shelling near the remains of an old fishing pier

You’ll pass each of these beaches on the way to Boca Grande Pass via Gulf Blvd or the Boca Grande Bike Path.

Range Light Park is the closest to the town of Boca Grande. A row of picnic shelters fronts this beach.

Standing tall above it is the Gasparilla Island Light, the metal tower with a beacon on top. It was formerly called the Range Light.

Built in 1888 in Delaware at the mouth of the Delaware River, it was shipped to Florida and assembled here in 1927.

Range Light Park is a hangout for the surfing crowd, catching waves on one of the few beaches on the Gulf of Mexico where you can find any.

The next parking area is Sea Grape Beach, with a nice natural oceanfront and a fair bit of buffer from oceanfront homes to its north.

It’s a quarter mile farther to the Seawall Parking Area, immediately after an oceanfront restaurant, South Beach, that feels like it’s been there forever.

The road jogs around the Boca Grande Pass condo complex at the seawall and crosses Belcher Rd.

A public promenade was established along the seawall in the 1920s, but recent reports state it is no longer accessible, so you can’t assume you can connect the park’s beaches by walking the beachfront.

The next parking area on the right is the largest one, at the Dunes Beach. An accessible walkway leads to the bathhouse and to the beach.

The final parking area is where the road ends at the Port Boca Grande Lighthouse. It provides access to the Dunes Beach as well as the beach along Boca Grande Pass.

Thanks to the wave action at this deep pass – the water is 80 feet deep relatively close to shore, and the land you see across the water is La Costa Island – seashells pile along the mouth of the pass.

Looking across the pass to Cayo Costa

Shelling is excellent both along the shoreline facing the pass and around the bend along the Gulf dunes.

Swimming, however, should be avoided south of the Seawall area. The currents are swift and dangerous just offshore. Beach swimmers should stick to Range Light and Sea Grape.

The southern terminus of the the Boca Grande Bike Path adjoins the Dunes Parking Area and the Port Boca Grande Lighthouse.

Look for it by the picnic shelter. It quickly starts paralleling Gulf Blvd just north of here. It extends north 1.8 miles through the park, connecting all the beach access points.

In its own dedicated greenway corridor, it enters Boca Grande and works its way through the historic residential and commercial districts.

Here, it provides access to restaurants and ice cream shops around 2.5 miles north of the lighthouse.

Following the former route of the Charlotte Harbor and Northern Railroad, it keeps going all the way to the north end of Gasparilla Island, ending after 6 miles near the Boca Grande Fishing Pier.

Other than walking on the bike path, your other option is to stroll the beach. The Seawall separates the two beaches in the park.

The Gulf of Mexico beach between the Sandspur Beach and Seawall Parking Areas is 1.5 miles each way.

It’s a little over a mile round-trip to walk from the Dunes Parking Area out to the old ore loading dock piers and back.

You can walk 3 miles round-trip on this beach

In addition to admiring the Gasparilla Island Light, a visit to the Port Boca Grande Lighthouse is a must. It’s where the park’s museum is located.

Built in 1890 to guide ships to Charlotte Harbor, the Port Boca Grande Lighthouse served as a working lighthouse for nearly 70 years, with a lighthouse keepers’ quarters.

Put out of service when the Coast Guard decided to use an automated light in 1956, the lighthouse was abandoned by 1968.

It was fully restored between 1980 and 1986. It is again an active lighthouse, recommissioned as a navigational aid so ships can find their way to Charlotte Harbor. A 5th order Fresnel lens supplies the light.

The multi-room museum covers local history, from Spanish fish ranchos to tarpon fishing, the phosphate industry, and the ancient peoples who once populated these islands.

Let’s not forget pirates! While legend has it that the reason for the island’s name is the pirate José Gaspar, in reality, that was just a fable cooked up for storytelling and marketing.

In fact, the name “Boca Gasparilla” appeared in 1777 for this location on a British military map, well before the pirate Gaspar started a life of plunder in 1783.

A volunteer group, the Barrier Island Parks Society, manages the museum and gift shop. Hours may vary with volunteer availability. Call ahead to ensure the museum is open.

To spend a day or a weekend on your own deserted island? Heaven. This is one of the tougher and costlier state parks to get to, but well worth it.

Imagine your own private island: a sweep of bright white sand along the shallows of the Gulf of Mexico. That’s Don Pedro Island, a Florida State Park that is mostly offshore.