Nearly 15 miles of Indian River Drive (CR 515) parallels US 1 through Cocoa and Rockledge along the Indian River Lagoon, providing a scenic and safe road bike ride.

This morning I returned to one of my old favorite bike rides, Indian River Drive, which we natives call “River Road.” I began riding this Brevard County Scenic road along the Indian River in 1971 on my newly purchased ten-speed Schwinn Varsity. Thirty years and many bicycles later, I’ve lost track of how many times I’ve done this ride.

Location: Cocoa and Rockledge
Length: Up to 28.6 miles round-trip

Public parking and restrooms are available at the southern end of this route at Riverwalk Park in Rockledge, and at the midpoint at Riverfront Park in Cocoa Village. Parking may be available with permission at the north end of the route at Four Communities Volunteer Fire Department in Cocoa, where Indian River Drive starts its journey south. Consider a donation to the volunteers if you do.

Indian River Drive runs parallel with US 1 for almost fifteen miles. For years, when I noticed anyone riding along US 1 with gear and panniers, I would stop and flag them down. After asking then where they were headed, I’d tell them about the road along the river, and how it would save them from miles of traffic and take them past old riverfront homes and views of the Indian River, with the chance of seeing manatees and dolphins playing along the shore.

On today’s ride, I’m on a recumbent trike and armed with a GPS and a camera. I’m officially working! Our Florida Hikes readers said they wanted to see more about cycling and paddling, so here I am, recording it to share this ride with others.

Along with me is my friend Richard, who introduced me to recumbent trikes. We met along this route years ago, with me on foot and he and his wife Rita on recumbent bicycles.

Getting a GPS track and photos from a trike seat is so easy and safe. Just downshift, pull off the road into some shade, and snap the shot or take a data point. You don’t ever have to unclip from the pedals. When you’re done, you’re off again. Switching screens on the GPS and adding data points and notes should not be done while riding on two wheels. It’s like driving and texting. Just don’t do it!

Indian River Drive winds along the river, providing views well above the river and along the water’s edge. You cruise past century-old homes and yards with park-like settings. Huge live oak trees provide shade from the midday sun.

Reaching Cocoa Village, the road divides, passing quaint shops and eateries. On the return trip, the northern route provides more shops, galleries, and places to dine, plus a waterfront park with ancient oak trees, a playground, bandshell, and a river walk.

South of the Village you enter the city of Rockledge, named for the stone ridge that is quite visible along the water. Here, the road is flanked with more restored Victorian homes and an eclectic mix of others added over the last century.

After 14 miles, the road turns you away from the views of the Indian River and runs into US 1. A short ride along the highway leads to Riverview Park for restrooms, a nature center and a boardwalk to the edge of the water.

Today, the park pavilion became a shady place to repair a flat tire. Karma! This was the first time in over a year that we carried a spare inner tube and an air-pump. Being a front tire, the repair was easy requiring no tools. Just a spare tube and air pump.

The tire fixed, we reversed our course and rode north, through the Village, where we stopped for a good lunch. The ride ended at the fire station where we had begun, at the northernmost point of Indian River Drive, a 28.6-mile round-trip. 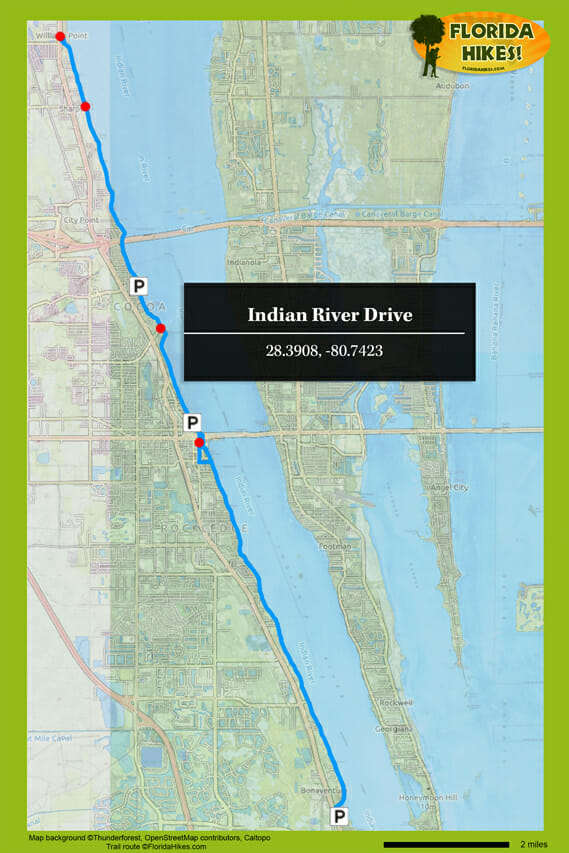