Kayaking with the Aquaterra

In the continuing adventures of John and his kayaks: 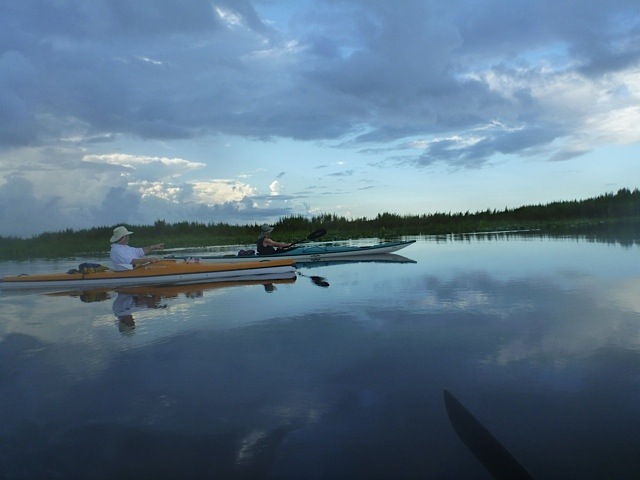 The Aquaterra Chinook was two feet longer than my old kayak, the bottom was much rounder, and it was noticeability narrower. Plus it didn’t have that great big opening for me to get into. In my old “recreational ” kayak the opening was large enough for me to lean back and prop my feet up on the front of it. Not on this boat! I started wondering, how in the heck did I get in and out of that little opening? Let’s see… fifteen years ago, when I was younger and thinner, it was probably no big deal.

Not wanting to get in and out of the boat under the watchful eyes of Lew and Dale, I made several practice paddles on my own, falling in and out several times before almost getting the hang of it.

Finally it was time to supprise Lew and Dale. When I pulled into the parking lot, they knew I was up to something. Besides all the dimensional differences, this boat was bright yellow where the old one was blue.

We headed off. I was a bit wobbly but didn’t get wet while entering the kayak. As it was 16 feet long, it didn’t take me long to learn to use the rudder system to help with turns.

Paddling was a pleasure. I could stroke, stroke and coast just like my serious kayaking buddies.

After our trip, with our boats loaded back on the cars, we stopped for lunch. Lew and Dale let me in on a little secret. When I first showed up to paddle with them with my little recreational kayak, they didn’t hold out much hope for me lasting very long. Or having a chance of keeping up. But I kept paddling and paddling, showing up week after week.

When I showed up with this “new” kayak, they began to wonder if they were going to be able to keep up.

It’s now been well over a year since I’ve paddled with them in the Aquaterra. I’m older and wider. And I truly expect to get wet a few times while refreshing myself with the proper entry and exit of such a tippy boat.

When I moved away from the coast, our weekly paddles are one of the things I miss the most. Lew always sends me a report with photos. But since I’ve been gone, they’ve become avid stand up paddleboarders. Maybe one day I’ll come across a nasty-looking old paddleboard and ask to join them, starting the process over again.