It’s “The Land of Little Giants,” according to American Forests magazine, and we can be thankful it was preserved in the 11th hour.

Once slated for clear-cutting to build oceanfront condos, Dagny Johnson Key Largo Hammock Botanical State Park has the highest concentration of National Champion trees in one place in the United States.

Open 8 AM until sunset daily. Leashed pets and bicycles welcome.

Stay on the pathways! There are poisonwood and machineel trees throughout the hammock, both of which can cause severe reactions for anyone allergic to poison ivy. 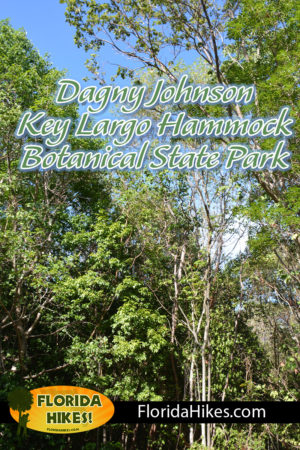 Expect insects no matter the time of year. Always use mosquito repellent.

During the summer months insects can be extreme. As this is a botanical state park, no mosquito control spraying is done here, unlike throughout most of the Florida Keys.


Driving north on US 1 from John Pennekamp Coral Reef State Park, keep right at the fork for SR 905 (to Card Sound Rd). The trailhead parking area is on the right after 0.5 mile, in front of a large archway.

In his novel Native Tongue, Carl Hiaasen shared a zany, imagined version of this spot. 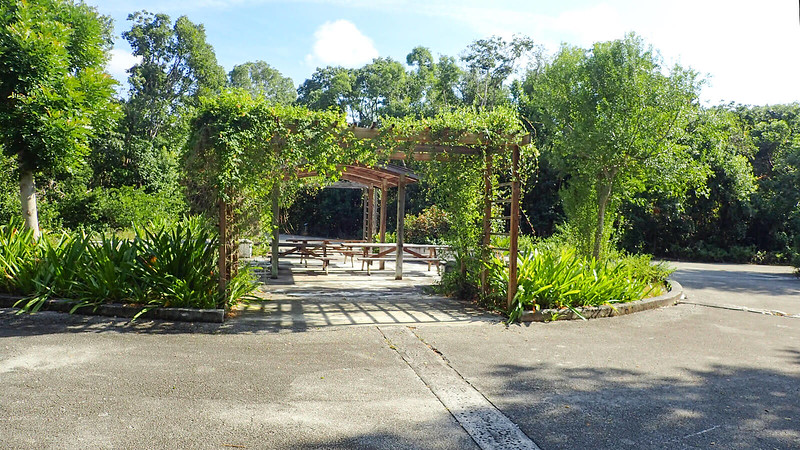 Fortunately, after the faux “Mediterranean coastal village” went belly-up in 1985, the state of Florida acquired the property and other adjacent lands, which now total close to 2,500 acres.

Together with adjoining Crocodile Lake NWR, the Key Largo Hammock is by far the largest remaining tropical hammock in the United States.

It is crucial to the survival of endangered species such as the American crocodile, the Key Largo woodrat, and the Key Largo cotton mouse.

A liguus snail in this tropical forest

With the exception of the white-crowned pigeons and liguus snails, catching a glimpse of an endangered species here is a rare event.

However, as the northernmost tropical hammock in the Florida Keys, it is a cradle of botanical diversity, the northernmost extent of Caribbean trees that grow to National Champion heights in this dense forest. 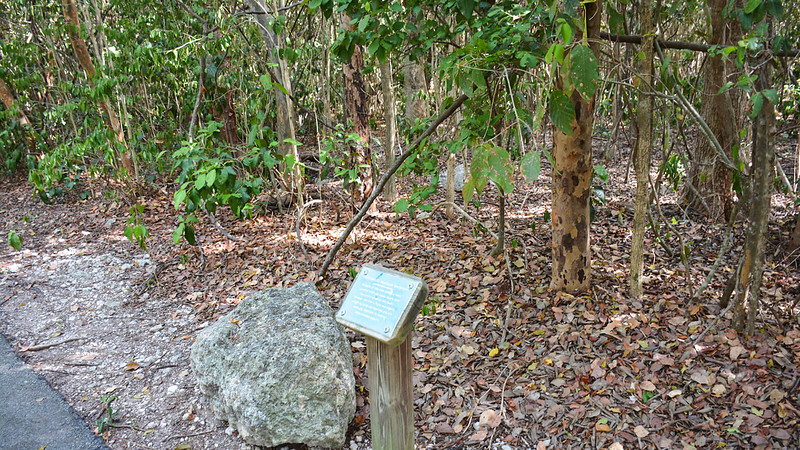 One of the markers pointing out specific tropical species

Most incredibly, none of the National Champion trees in this park are over 45 feet tall.

Some of the current and prior national champions found in this forest include crabwood, blolly, wild cinnamon, and wild tamarind. 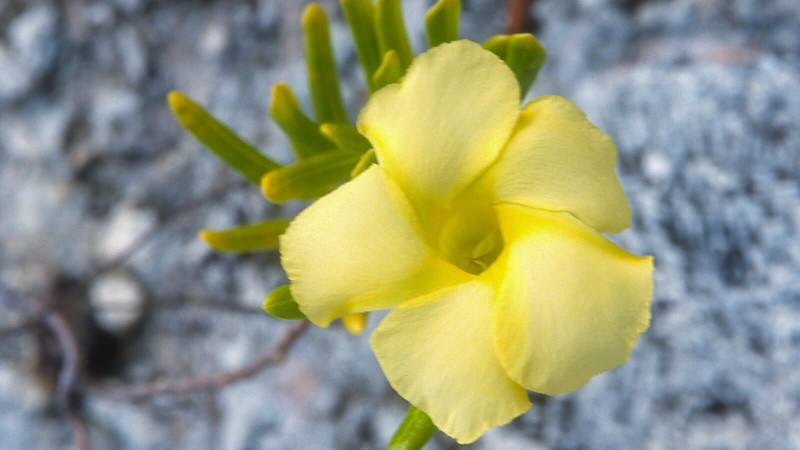 In all, 84 listed plant and animal species are protected here. Manchineel and poisonwood are common in the hammock.

Ranger-led interpretive hikes are offered, and are especially valuable for a good introduction to tropical hammock species. 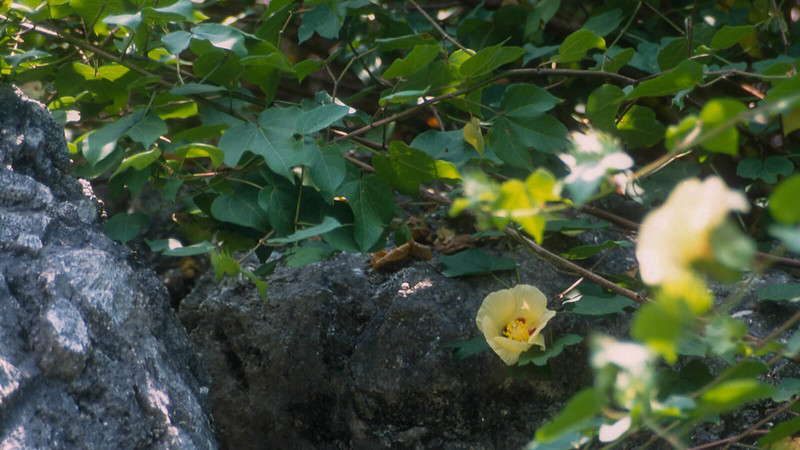 Wild cotton growing along a quarry

There are three options for roaming this very large park, most of which is off-limits to the public.

Casual visitors may prefer turning off on the 1.1-mile Key Largo Hammock Nature Trail to burrow more deeply into the tropical hammock to learn more about its inhabitants. 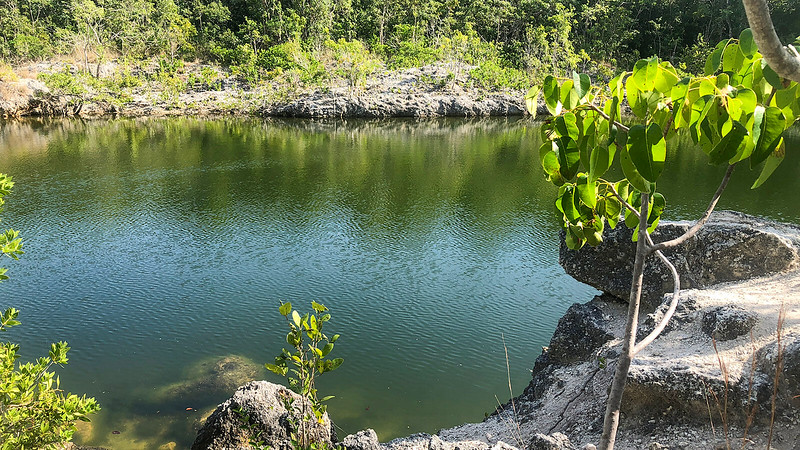 Limestone was excavated from these quarries long ago

Finally, botanists, biologists, historians, and others with a reason to explore deeper into the preserve can check with the manager at nearby John Pennekamp Coral Reef State Park for a backcountry permit to roam miles of old forest roads.

This is not an expedition to take lightly or for a casual hike, for there are dangerously toxic trees throughout the hammock, and endangered species (flora and fauna) that could be affected by your presence.

While we mentioned this permit in 50 Hikes in South Florida nearly 20 years ago, we understand that it’s no longer handed out for just casual exploration of the backcountry. 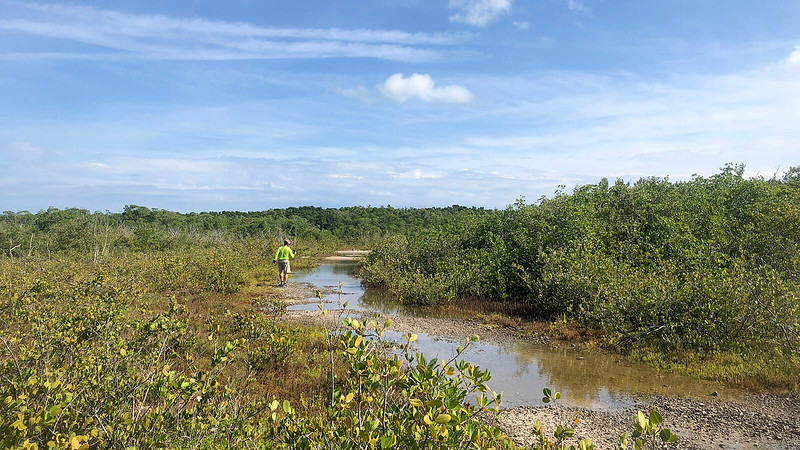 On the interpretive Key Largo Hammock Nature Trail, tunnel into the largest tropical forest in the United States to enjoy its natural beauty while learning about its unusual trees

Spanning from Key West to Key Largo, this 108-mile linear state park corridor is an island-hopping slice of tropical paradise along the former route of the Florida Overseas Railroad

Protecting more than 6,700 acres of Key Largo to provide prime habitat for the endangered American crocodile, Crocodile Lake NWR has a small visitor complex where you can learn about species conservation at the refuge.

Molasses Reef, the most accessible living coral reef in the United States, is the reason that John Pennekamp Coral Reef State Park exists in the Florida Keys.