Showcasing some of the Florida Keys more rare and unusual habitats, the 1.2-mile Golden Orb Trail at Long Key State Park swings an arc through the heart of Long Key, ending up at views of the Atlantic Ocean.

Long Key is a botanically-rich island in the heart of the Florida Keys, with its strange beauty brought to light along the gentle Golden Orb Trail at Long Key State Park.

Traversing several uncommon habitats found primarily in the Florida Keys, it leads you out to views of the Atlantic Ocean.

Formerly a loop trail, it was chopped apart by damage caused by Hurricane Irma. With some new boardwalks, it remains a showcase for ecosystems rarely seen.

Along its length, you’ll walk through a tropical rockland hammock, traverse the desert-like tidal rock barren – where the “soil” underfoot is sun-bleached pieces of coral – and end up on a coastal berm, a hurricane-crafted sand ridge defining the island’s perimeter.

Now a round-trip hike, it includes optional extensions into parts of the island that were roughed up by Hurricane Irma, shown in blue on the map.

After Hurricane Irma, the portion of the Golden Orb Trail that started from the mangrove boardwalk and went north on the island simply washed away. The boardwalk from the parking area is now a dead end. While the tower still exists, sadly the entire red mangrove swamp has died due to being inundated by salt water for far too long during Hurricane Irma.

However, park staff cleverly rerouted the Golden Orb Trail, which remains the primary feature of the park, especially with the campground and natural beaches now gone as well. It may be late 2019 before the campground will reopen.

0.0 > The Golden Orb Trail now starts where it once ended: at the parking area at a large kiosk, with the trail leading into the rockland hammock. The hammock is just above an interior mangrove swamp on Long Key and this swamp was not affected by the hurricane. It’s still quite healthy.

0.2 > The canopy is sparser through the hammock, but that hasn’t hurt the health of the tropical trees that grow here, and you will still see a lot of poisonwood along this trail. If you see what looks like motor oil oozing from a tree trunk, don’t touch it!

0.3 > When you reach the open tidal rock barren, the trail twists and winds around stunted trees and shrubs like bay cedar, a plant found only in this type of habitat. A new boardwalk guides you through a healthy patch of red mangroves.

Another boardwalk crosses an area where the tide washed across the barren, creating marl mud. A raccoon emerged from under boardwalk and ran off into the nearby mangroves. Here, you can see that along the dead mangrove marsh, there are new signs of life.

0.4 > As you meander through more open tidal rock barren, notice the bleached coral that makes up the soil here. There are also many young poisonwoods, their leaves rimmed in yellow.

0.5 > The trail dips through a drainage area in the mangroves, although it was dry when we crossed it. As it rises up, wildflowers grow densely on both sides, creating a hedge of sorts that is bustling with bees.

You pop out onto the coastal berm. It is a narrow, sandy strip of land between the mangroves of the lagoon and the mangroves along the calm waters of the Atlantic Ocean. Formed by the action of hurricanes, this sandy ridge is now where the trail ends, since the connection to the main boardwalk was broken when a bridge washed away.

0.6 > From the berm, you can see how the colorful sea wrack – seagrasses changing color as they decompose – create an interesting edge to the shallows of the Atlantic, here behind the reefs of the Florida Keys.

A sign indicates that you are welcome to walk up and down the coastal berm from this point if you like (up to about a half mile), but you will have to return to this point to get back to your car.

A round-trip to this overlook on the Atlantic and back to the trailhead is 1.2 miles, the same length as the former loop trail was. If you add on the extra walking, you can tack on up to an extra mile. However, be aware that the hurricane pushed a lot of debris up into and over the coastal berm. Some of it is pretty, some of it is not.

Return the way you came, and watch how fiddler crabs dash away at your approach as you cross the spots where the mangroves intrude on the tidal barren.

1.2 > Passing through the tropical hammock once more, return to the parking area, completing your round-trip hike. 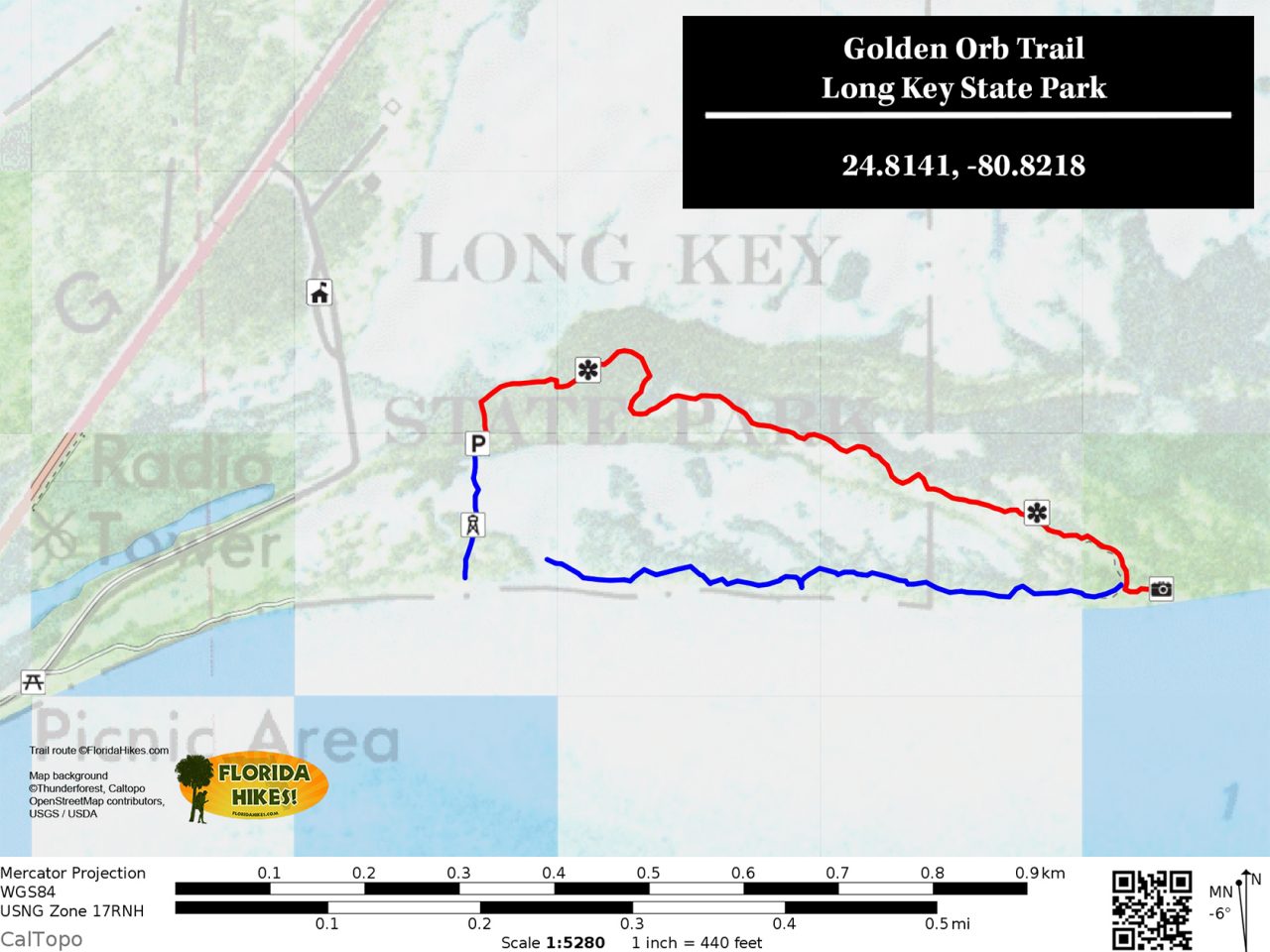