Nature, or Not? Thoughts on the Gemini Springs Addition

Our opinion: why DeBary’s plans to take a portion of the Gemini Springs Addition for economic development is wrong on so many levels, and what you can do to express your concern.

We were watching an old comedy last week, “The Great Outdoors,” where two brothers are sitting in front of a pristine lake in the North Woods.

The one, played by John Candy, is reminiscing about the good times he had with his father fishing on the lake, and how lovely the setting is, and how it’s great to share it with his own family.

The other, played as a fast-talking wheeler-dealer by Dan Ackroyd, points to where he’d start a mining operation, build lakeside condos, and bury medical waste under the placid waters.

Similar opposing forces are at work over the Gemini Springs Addition, 948 acres of public land acquired with funds provided by FLDOT as mitigation.

Mitigation for the wetlands that were destroyed during construction of Interstate 4 along the DeBary Bayou and Lake Monroe.

It is under a deed as conservation land, managed by the St. Johns Water Management District for the public trust.

Yet the City of DeBary has designs on this land, to meet their financial obligations imposed by being one of the communities that benefit from SunRail, a regional commuter railroad.

They’ve hired an environmental consultant who also happens to be the Chairman of the Governing Board that oversees the agency that holds the land to represent them in asking the District to cede more than 100 acres of this conservation land to them.

What’s their plan? They’ve sketched out a series of stormwater ponds carrying away drainage from planned high-density residential and shopping around the SunRail station and towards DeBary Bayou.

In their Economic Development Strategic Plan dated May 2014, page 4, you can see where they first planned to take a portion of the Gemini Springs Addition, the rectangle at the bottom of the map.

In the city’s Transportation Overlay District (TOD) plan, they’ve expanded on that territory to include a big chunk of Gemini Springs Addition, right where the Spring-to-Spring Trail extension – part of the statewide Florida Coast to Coast Trail – slices through it.

Here’s the future they see for this parcel of land and the cow pastures along US 17/92 that adjoin Gemini Springs Park: 2,400 residential units along a stormwater retention facility. Developed on your public land, to benefit private developers. 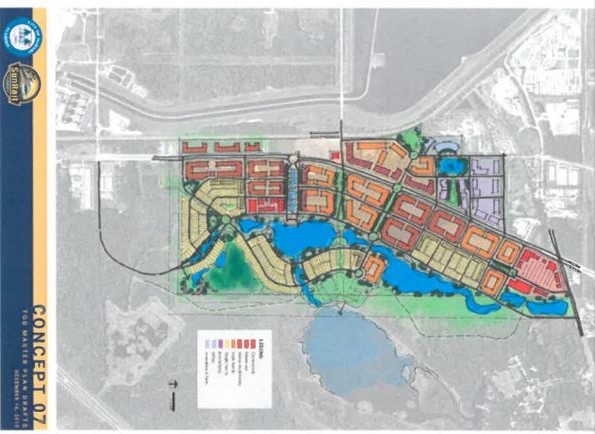 Instead of SunRail extending into Volusia County to a terminus in one of the already thriving, people-packed communities, the station was built somewhere that residents have to drive to.

Around it, an ample supply of nearby farmland and “vacant land” available be converted to housing developments. Government officials call this “economic stimulation.” We call it sprawl.

In response to questions about this plan – which runs roughshod over the sacrosanct concept that conservation land should be held in the public trust in perpetuity as natural land – one DeBary official pointed to Crane’s Roost Park in Altamonte Springs as an example of what the city has envisioned for the landscape along DeBary Bayou.

That’s where the brothers don’t see eye to eye. A landscaped, sculpted, faux river of stormwater lined with residences may look pretty to potential buyers, but it’s not nature.

We’ve seen this happen over and over again in Florida. A developer wipes the landscape clean of native habitats, builds the homes and apartments, puts in grass and nursery-grown trees, and hires a lawn crew to take care of it weekly.

Pesticides get applied and run into the stormwater, or seep into the aquifer.

That’s not natural. Thats’s not what the public should expect of their conservation lands. There’s no question that the Gemini Springs Addition needs cleanup, that DeBary Bayou needs cleanup.

What’s not a problem are the spectacular oak hammocks along the water’s edge and along the bike path, where draperies of Spanish moss hang thick and low and where resurrection ferns and orchids cling to ancient oak limbs.

What’s not a problem are the pocket wetlands with their brilliant displays of wildflowers year-round – blue flag iris in spring, yellow cannas in summer, swamp hibiscus in fall.

What IS a problem is that this is a springshed, and the twin springs at Gemini Springs are already suffering the effects of too many nitrates in the aquifer. It’s been a long time since the spring run was open for swimming.

What IS a problem is that the statewide Coast to Coast Trail swings through this gorgeous corner of Volusia County, and bicyclists are drawn to this section of the trail for its beauty and ease of access.

Hikers like it, too. Some have seen Florida black bears. We’ve watched eagles soaring overhead and landing on the power poles.

What IS a problem is that the public likes its conservation land wild, and doesn’t want to see it reshaped according to a engineer’s plan.

What IS a problem is that this could set a statewide precedent on the taking of conservation land by a municipality for a use that they deem “better” than leaving that land for future generations to enjoy.

There are so many ways that this plan that the city of DeBary has is wrong, from the intentional siting of a SunRail station to spur new development instead of to serve existing residents, to the terrible conflict of interest inherent in the negotiations underway, to the simple fact that the land was bought with mitigation funds for other development and is under a conservation deed.

Which brother are you? The one who sees nature as a place to bring family together and a place for quiet introspection, or the one who sees it as something to exploit and mold to their needs?

Ask the city of DeBary to withdraw this plan and respect the reason for which the Gemini Springs Addition was purchased in 1999 – as conservation land.

There is plenty of private land near the SunRail Station on which a stormwater facility could be built – and on which we expect to see high-density housing appear in the not-too-distant future. Leave our public lands alone.

If you’re a resident, show up for public meetings and share your opinion.

If you’re a hiker or a cyclist, get out there and enjoy the trails of Gemini Springs Addition – and share what you see on social media with a hashtag, #savegemini

Sign a petition to be shared with the DeBary City Council