More than ten thousand soldiers met and fought in the longleaf pine forest at Olustee, the largest Civil War battle on Florida soil

It is a patch of hallowed ground preserved as a memorial by the 1899 Florida legislature and opened as Florida’s first state historic site in 1912.

Walk these woods when the park opens, and you’ll feel the fog and a chill. Like Gettysburg, Olustee has its own ghosts.

Open 8 AM to sunset daily. Museum and restrooms open 9 AM to 5 PM.

Leashed dogs welcome, but not in buildings or during reenactments. 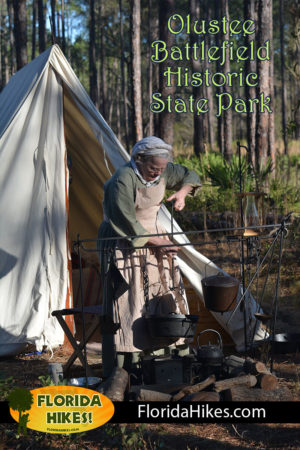 Surrounded by the Osceola National Forest, which was established many decades after this park was founded, Olustee Battlefield is a place for reflection.

Similar in nature to the memorials found at Gettysburg, a stone tower erected in 1936 is accompanied by memorial stones for Confederate leaders of the battle.

Reenactors near the tower

The small museum contains an array of artifacts found by archaeologists on the site, and shows a movie about the battle.

Picnic grounds sit near the fire tower, which is part of Osceola National Forest. A historic cemetery is along the rail line.

Picnic grounds and a memorial

During the annual encampment, tents swarm through the forest beneath the tower and near the museum.

On February 20, 1864, more than 10,000 met in combat in these pine woods in what would be Florida’s longest and bloodiest battle of the Civil War.

It was sparked by Union general Truman A. Seymour, whose success at capturing Baldwin tempted him to send his troops west without orders from his superiors.

His Union forces were met here by the largest Confederate buildup ever to defend Florida. Four hours later, more than 3,000 lie dead and dying in these pine woods.

Soldiers on the battlefield

Despite injuries and losses of nearly a thousand men, their victory on the battlefield rallied the Confederates to continue the fight.

Walking you between interpretive stops within the pine forest where the battle took place, the Olustee Battlefield Trail unfolds the drama of what occurred.

Juxtaposed with the beauty of a longleaf pine forest untouched since the Civil War – a counterpoint to the surrounding pine plantations – it’s a gentle 1.1-mile walk.

The Olustee trailhead adjoining the front gate provides access to a portion of the statewide Florida Trail.

It includes a short loop through the longleaf pines known as the Nice Wander Trail.

An annual reenactment held in February re-creates the battle and encampments. With nearly 10,000 participants, it’s one of the South’s largest reenactments.

See our photos of Olustee Battlefield during the re-enactment

In the city once called Alligator, first home of the University of Florida and named for a great chief of the Seminoles, Alligator Lake has long been a gathering place. Established as a park in 2002, hiking and bicycling are now its primary focus.