Wind through the pines and step back in time. Although this is an interpretive trail, it’s not like any other in Florida.

As you walk around the loop, you trace the unfolding of the Battle of Olustee.

Soldiers on the battlefield during a reenactment

Each of the signs along the path explains how the battle progressed, including quotes from officers in the Official Records as well as a map of troop movements.

It’s a way to reflect on history in place at Florida’s oldest state memorial, established in 1899 Florida legislature and opened as Florida’s first state historic site in 1912.

Open 8 AM to sunset daily. Museum and restrooms open 9 AM to 5 PM.

Leashed dogs welcome, but not in buildings or during reenactments.

The museum features a 20-minute film on the battle as well as exhibits about Florida’s role in the Civil War. If it is open, take the time to visit before your hike to have a better understanding of the magnitude of this battle. 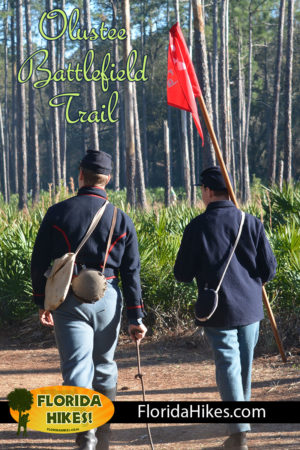 On the left side of the park entrance road after the railroad track is a trailhead for the Florida Trail. Pass that and continue past the fire tower up to the interpretive center and museum to park.

The trail starts just north of the museum. Look for the kiosk and head towards that. Continue past the kiosk to the first bench and interpretive marker at the start of the loop. A red arrow on a silver diamond marks the trail route.

Walking through the pines, hearing the whisper of the wind through the treetops, it’s hard to imagine this forest as a battlefield.

Where it isn’t cleared, the understory is a dense thicket of saw palmetto

Yet this same expanse, thick with saw palmetto under the tall pines, provided little shelter when the armies met.

Off to the right of this side of the trail, the Union troops set up their lines.

Behind them was an old open field, broken up by fences, and an impenetrable bayhead to block their retreat. In front of them, a marshy pond blocked their advance.

Continuing down the broad needle-strewn path, you come to a fork at 0.2 mile. Stay left to walk towards the bench. An open clearing is visible.

Cross the trail used by reenactors to ride their horses from their encampment to the open field.

The field is kept that way for the annual Civil War reenactment, the largest in the Southeastern United States, held the third weekend of February.

A set of bleachers faces the clearing. In reality, the battle was fought among the pines and the thickets of sharp-edged saw palmetto.

Visitors viewing the reenactment from the bleachers

Continuing past the field, the trail walks the edge between the scrubby flatwoods and pine flatwoods. Bracken fern fills in a vast open space devoid of saw palmetto.

Just beyond the interpretive sign, the 48th New York lined up in the woods near the bayhead. As the wind picks up, it rattles the saw palmetto fronds, and you hear the clash of bayonets.

“Grape and canister swept by with hideous music, and shell after shell tore through our ranks and burst amid heaps of our wounded heroes,” wrote a survivor of the 115th New York.

Coming to a bench at 0.5 mile, the trail turns left. Look across the expanse of pines. Even in the middle of the day, you can see a fine mist.

Although the chemistry of tree transpiration causes “smokes” and “fogs” in dense forests, the mist that perpetually hangs in this particular pine forest has an otherworldly feel. Like Gettysburg, it feels ghostly.

A bayhead forms the thick wall of vegetation behind the pines to the right. This dense swamp proved fatal for many, blocking off the soldier’s retreat.

As the trail rounds a curve to the left, it heads along the line of the Confederate positions. The railroad to their backs, they came in from the vicinity of Ocean Pond, where they had built a temporary earthworks fortress.

A small bridge elevates the trail over occasional drainage flows. At 0.9 mile, a bench sits at an intersection with a jeep trail from the right. Continue straight towards the next interpretive marker.

Blackjack oaks take over the understory under the pines as you approach the cross-trail. Continue straight, following the red arrow.

Given the age of the pines in this forest, it’s interesting that you see no catfaces from the turpentine industry that flourished in this area.

Tall grasses and palmettos around the pines

The 1899 Florida legislature raised the funds to purchase this land and protect it as a historic site, to honor the men who died here.

As you continue to walk, you can see the flags flying behind the interpretive center, flanking a memorial monument that dates back to 1912.

The loop ends at a bench. Turn right to walk back past the kiosk and over to the parking lot, completing your hike of 1.1 miles

Reenactors near the memorial

See our photos of Olustee Battlefield during the re-enactment