A visiting friend texted me a photo of the Pioneer Paddling Trail sign he’d come across while exploring Merritt Island, discovering Kings Park and the Island Pioneer Trail.

He saw the white post with blue stripes in the waterway edging the bike path, and knew there had to be a put-in somewhere. Sandy and I had found it a couple years ago ourselves while biking this greenway.

Trail map at the launch

When Matt asked me to join him on a paddle I jumped at the chance. He even offered to bring a spare kayak so I wouldn’t have to install my racks and bring my own boat.

To my great surprise, I realized I’d been down this waterway before. As a teenager.

A familiar waterway near Chase Hammock

Navigation markers are provided but water levels fluctuate. Both overgrowth and deadfall can block portions of the route. 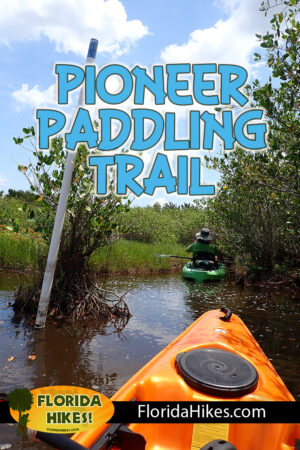 
From Interstate 95 in Cocoa, follow SR 528 east to exit 49, SR 3 on Merritt Island. Drive north towards Kennedy Space Center 2 miles to the traffic light for Hall Rd. There is a sign for Kars Park pointing east. Turn right and continue 0.8 mile to the trailhead on the left. It also serves as the southern trailhead for the Island Pioneer Trail, a paved path along a swamp-edged greenway extending a mile north to Kings Park.

Nearly 50 years ago, my church youth group leader in Cocoa led a canoe trip in this part of Merritt Island. Knowing I was a Boy Scout with canoeing experience, he asked me to assist.

He led the group and I was sweep, making sure we didn’t lose anyone. We put in along the side of the road into what was little more than a wide ditch.

At the time I knew no one who’d paddled this area, which was ditched and drained for mosquito control amid orange groves and vegetable farms.

But as I paddled this route, I’m pretty sure our trip started at the north end of this stretch, at Chase Hammock Rd. Our trip ended after we entered the Barge Canal.

Since those days, the mangroves have taken over and made this an interesting but challenging route.

Starting off on the journey

Our paddle began with a nice wide canal with enough vegetation to protect us from the wind. Then the mangroves started closing in, becoming a twisting path.

With the paddles stowed we continued handhold to handhold through the mangroves.

The twists and turns were so tight I was happy to be on a 12′ Hurricane sit on top loaner from Matt instead of my usual 14-17′ enclosed kayak.

From mangrove caves to open water it was fun. Some of the branches were so low that Matt needed to lower the back of his seat to get through.

The sit on top gave me an advantage of being able to lower myself, but it also meant that I had no protection from the sharp branches.

By the time we’d finished, I wished I’d worn long pants to protect me from the sun and scratches.

Narrows between the mangroves

The trail is basically shaped like a ladder with only three rungs. Taking the cross paths gives you a few different options.

We followed the west leg of the loop to start, skipping the cross trails, and paddled to what appeared to be the end of the viable route.

We might’ve been able to snake our way a little farther hand-over-hand through the mangroves.

But neither of us liked the thought of getting stuck and having to back out, going hand-over-hand, looking over our shoulders.

Shallows as the trail runs out at the north end

Taking the northernmost crossover to the east leg, we went left to see where the dead-end went. After a couple of tight spots we came to a nice open canal.

We were happy with our choice. The end was wide enough for an easy turnaround with a great view of an eight-foot-tall giant leather fern.

Looking for the passageway

Part of this leg runs parallel to the bike path. We stopped to talk to a couple out for a ride with their young children.

They told use that they lived nearby, rode the trail often, and we were the first kayakers they had ever seen.

Where we started paralleling the bike path

Knowing by the maps posted along the route that this east leg should lead us to the put-in, we watched for an opening on our right.

It led to a large pond, another dead end. We realized we must’ve missed a turn and backtracked along the edge of the pond looking for an opening.

Scouting along a pond

Leaving the pond and returning to the canal, Matt saw what looked like a small opening. When he first pulled in, I was sure that it couldn’t be what we were looking for.

As he worked his way through by hand, we noticed that one of the mangroves blocking our way was laying completely across the waterway and there were roots attached at one end.

Our return passage was hidden

The blowdown had completely hidden the trail. Using a very narrow opening and lifting branches over our heads we were able to squeeze our way through.

Back to an open canal, we heard a rumble off in the distance. Thunder or traffic?? Our view of the sky was obscured but after a couple more rumbles we knew it was thunder.

Broad open canal on the return

We could feel the weather changing and assumed we were about to get rained on. A couple of turns later we reached the put-in.

When we’d launched and I saw the sign said the trail was only a couple miles long, I thought this would be a short paddle before lunch. Wrong!

By the time we completed the loop we had only averaged a little over a mile an hour.

It is an interesting trail, making for a wilderness paddling experience not all that far north from the bustle of activity on Merritt Island south of the Barge Canal.

Fish and birds were our only companions most of the trail, except for the cyclists we saw. It’s located close enough to Cape Canaveral and Kennedy Space Center those rumbles could have been a rocket launch.

Parts of the trail are very overgrown. Plan on stowing your paddle and pulling yourself through the mangroves by hand.

If you’re not in a hurry and don’t expect an easy paddle, it’s a fun experience.

One of the many tight spots

A mosaic of landscapes disturbed by past development now lush with vegetation, Kings Park on Merritt Island protects both freshwater and brackish waterways with a ribbon of bike path between them.

See our photos of the Pioneer Paddling Trail

A delightful immersion into the natural side of Merritt Island, the trails at Sams House at Pine Island range from mild to wild as they draw you deeper into coastal habitats along the Indian River Lagoon

One of the hidden natural treasures of Cocoa Beach, the Thousand Islands provide a fun paddle through a maze of mangroves on a marked trail through a conservation area.

It’s a summer thing, this shimmering glow of blue that rises from the shallows of Florida’s largest lagoon. Learn why it happens and how to see it yourself.

With white sand dunes and a beautiful oceanfront, Jetty Park is the closest beach to Cape Canaveral that stays open during launches at Kennedy Space Center: the viewing’s great daytime or night