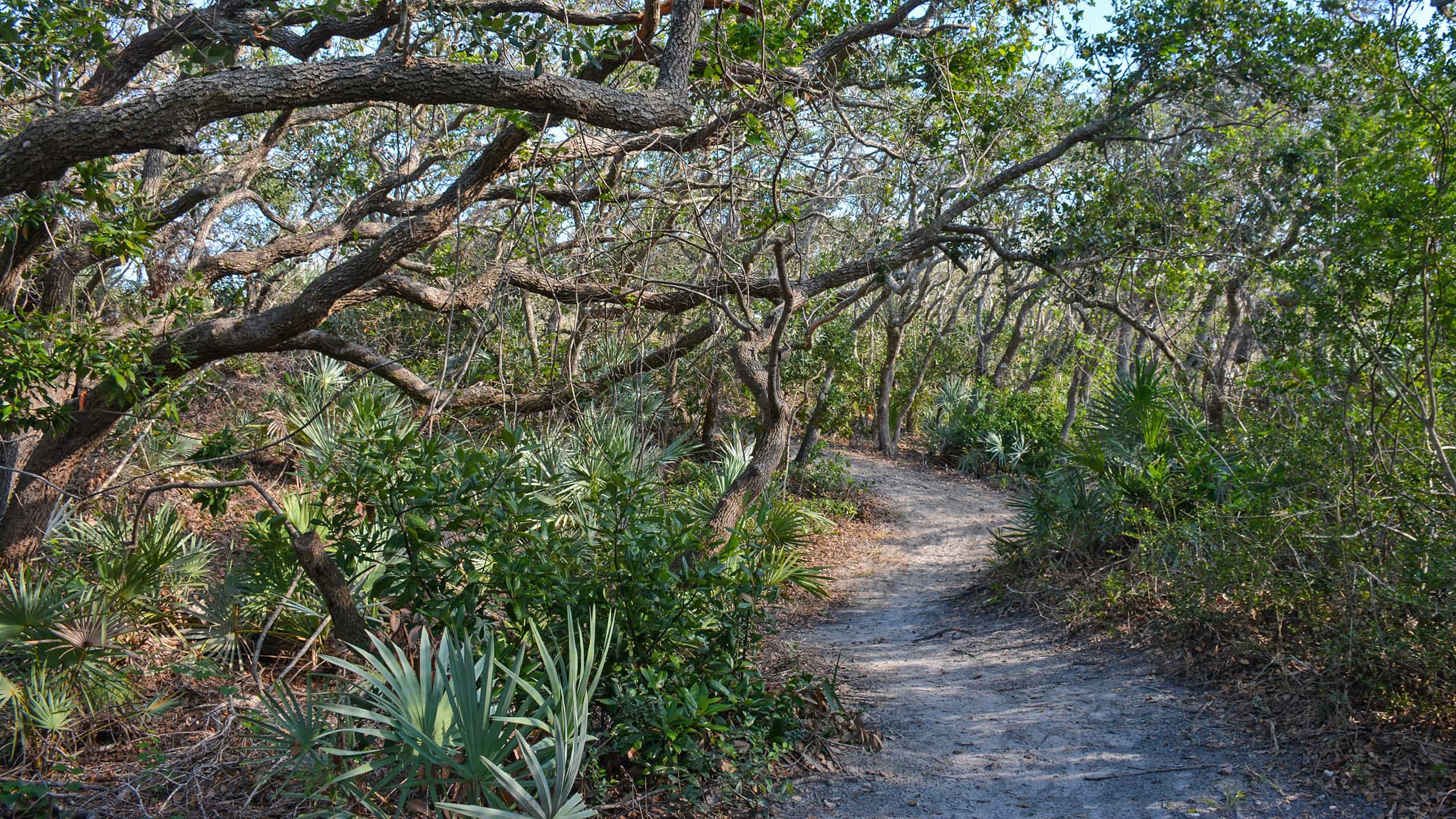 Just south of Daytona Beach, Ponce Preserve protects a cross-section of barrier island habitats, with more than 2 miles of trails connecting the beach and the Halifax River.

Just south of Daytona Beach, Ponce Preserve protects a cross-section of barrier island habitats in a 40-acre ribbon between the Atlantic Ocean and the Halifax River at Ponce Inlet. Home of the Green Mound, a particularly significant archaeological site, it’s also nature’s last stand on the barrier island where auto racing was born. Thanks to ancient dunes and massive middens, part of the trail is a roller-coaster with steep climbs and dips and scenic views. Most of it is set beneath a canopy of coastal scrub, with silvery-blue tinged saw palmetto dominating the understory. The other half of the trail is entirely wheelchair accessible, a boardwalk through mangrove forests out to the Halifax River, providing a nice sense of balance for hikers of all abilities.

Open dawn to dusk. Kayak put-in and fishing is across the street from the paved parking area. Beach access is via the hiking trail loop.

Your hike starts at the kiosk with an overview of the property and its history. Once one of the largest middens on the Atlantic Coast, more than fifty feet high, the Green Mound is thought to have been built by late St. Johns Period cultures and occupied between 500 B.C. and 1565 A.D. It was greatly disturbed prior to the 1940s—as many Florida middens were—by removal of materials for roadfill. Middens are ancient trash heaps, providing archeologists clues as to the lives of the people who once lived along Florida’s coast. Excavations in this midden have uncovered evidence of a village, including fire pits and postholes marking the corners of raised houses. The trail system takes you up and over the midden complex.

Where the trail heads into the maritime forest, make an immediate right to hike counterclockwise. Right off the bat, you’re tackling elevation change, clambering uphill under a dense canopy of sand live oaks and red bay. As the trail ascends, it makes a sharp right at a false lead into the forest. Keep clambering up until you pop out into the broad, open top of the hill with substantial swales of silver-blue tinged saw palmetto. Off to the right, you can hear both cars rushing by on Atlantic Avenue and the not-so-distant pounding of the surf. Power lines to the right make it obvious you’re near the road, but well above it.

From this high point, the trail drops steeply down into a bowl with silk bay and red bay overhead, the corridor tightly defined by the saw palmetto. It’s still a major scramble, up and down. After a half mile, you reach a sign indicating a side trail down to right leads to the beach. There is a crossover on Atlantic Avenue leading to an access point to the ocean. To reach the beach, walk downhill to the crossover and slip between the dunes on the beaten path. You emerge on an untrammelled shore, with the unfortunate sweep of condos as far as the eye can see to the left, and a residental area to the right. Few people use this beach approach so you may have a patch of sand all to yourself.

Return across the crosswalk back to the trail junction. To stay on the outer loop, take the sharp right. The trail becomes more linear and flat, with softer sand underfoot. Prickly pear cactus sports big yellow blossoms. You enter a long corridor, shaded by the red bay. To the left is high ground, part of the midden hidden in the forest. As you near the light at the end of the tunnel – Peninsula Drive – after 1.2 miles, a sign directs you to turn left. Here, you encounter oyster shells underfoot. The trail snakes its way between the trees at the base of the Green Mound.

The habitat transitions to include more tropical vegetation, with wild coffee and acacia growing in the understory. The trail zigzags between the trees, crossing undulating terrain. Walking down a stately corridor of cabbage palms, you reach another sign. Turn left here to continue around the loop. At the next sign, the Green Mound is off to your left, as is an ancient live oak, half-fallen and sprawling off the mound, limbs reaching out towards the Halifax River. There’s a bench here facing this enormous live oak, still quite alive, atop the secrets of the ancients.

Continuing along the trail, you pass a trail off to the left (which goes back up to the top of the mound) and a handful of picnic benches set in the deep shade. The trail emerges at the parking area. But that’s not all! Walk over to the restrooms and across the road for the second half of the hike, which heads out on a boardwalk past the kayak put-in. The boardwalk is a delightful walk, especially to watch the birds flock in from afar as the sun sets over the river. Winding through a salt prairie, it passes many tidal inlets, and gives you that “almost Everglades” feel, especially with the scent of the tidal muck. The farther you progress towards the river, the thicker the mangroves grow together until they create a dense forest along the river’s shore

Arriving at the final of several observation decks along the boardwalk, you reach the Halifax River, where you may spot an angler or two. After 1.2 miles, this is a great spot to sit in the shade and watch for dolphin and manatees. Return back the way you came along the boardwalk to complete the hike. 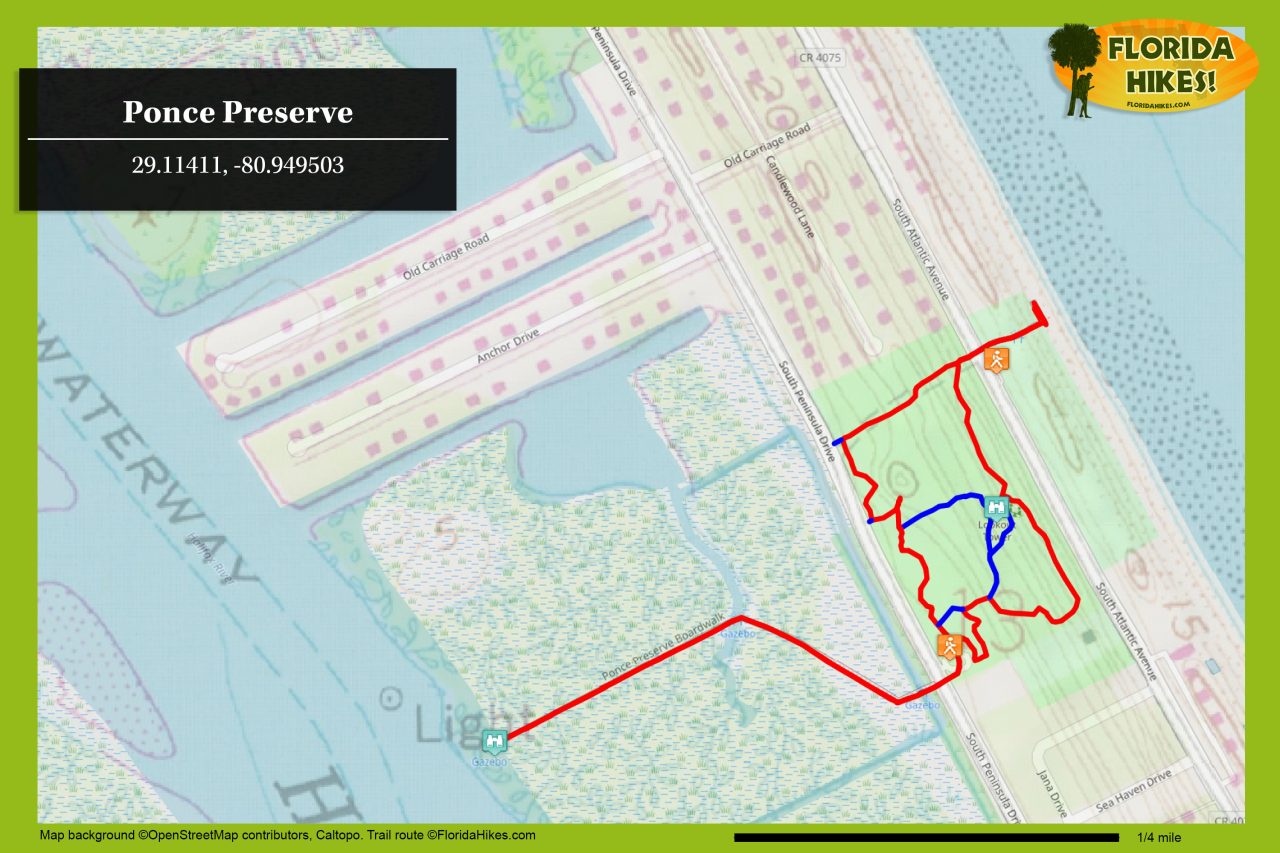