Spanning 2.3 miles along Charlotte Harbor, the Harborwalk is a recreational gem in downtown Punta Gorda

Sweeping west from where the Peace River broadens into Charlotte Harbor, the Harborwalk connects five parks along its length.

It stretches from Trabue Park, a mangrove forest near the hospital, to Fisherman’s Village at its west end.

All of the land along this waterfront once belonged to Colonel Isaac H. Trabue, for whom the town was once named.

Along the harbor at Gilchrist Park

In 1883, Trabue contracted for a planned community after purchasing 30 acres from James Lanier, the original settler who built a homestead along the Peace River.

Part of that original plat, as was common in the day, included waterfront parks as well as parks scattered through the residential district.

The Harborwalk now connects those parks along with the city marina, playgrounds, recreation facilities, sculpture, and memorials.

You’ll find quiet corners, too, to sit and watch for dolphins breaking the waves.

A prime corner on the waterfront at Laishley Park

Most of the route can be biked, but there are certain areas – like the docks, the piers, and the memorials – where you should leave your bike and walk to explore.

A round-trip starting at any point is 4.6 miles, but you can do more or less as time and interest allows. 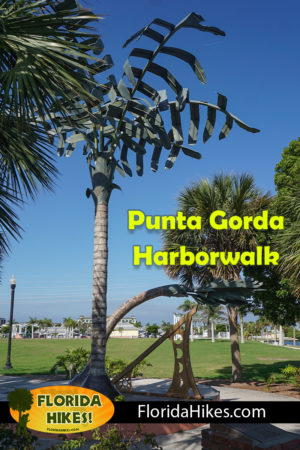 
There are several places you can park to walk or ride the Harborwalk, but the public lot with the largest number of parking spaces is at Laishley Park.

The Municipal Marina complex adjoins US 41 at Retta Esplanade just before the highway crosses Charlotte Harbor southbound. Make a right on Retta Esplanade and a left after the boat ramp entrance to enter the parking area.

To reach Laishley Park from Interstate 75, take exit 164, Punta Gorda, and follow US 17 south (East Marion St) into town for one mile. Turn right at Nesbit St to enter the park. The parking area is on the left.

You can hike or bike the length of the Harborwalk, and we tackled it both ways.

Sunrise and sunset are very special times to be out there on foot, while anytime is a good time for a bike ride.

We stayed right across the street from the Laishley Park Municipal Marina complex at The Wyvern Hotel, our favorite destination when in town.

That made it easy to just take the bikes off our rack in the hotel parking lot and ride from there.

Since the Harborwalk extends east and west of Laishley Park, and it’s the largest of the parks, we’ll describe it first headed east (upriver) and then west.

Our starting point at the marina complex

Laishley Park is big enough you can lap it for exercise, as we met many people doing on its paved loop.

Starting out adjacent to the boat ramp, near where you see the bikes at the Marina Store, head behind the buildings along the marina.

Cross the drive leading into the marina and turn left to follow the path down to the harbor.

It arcs around a playground and splash pad area adjoined by restrooms and a seating area shaded by solar panels.

Facing the harbor from the playground

It’s a 90-degree turn at the harbor to follow along it to the point of this park, a grassy area hemmed in by seawall.

A short flight of stairs leads down to the water, the promontory a good spot for dolphin watching.

At the point in Laishley Park

At this corner of the park is the Spirit of Punta Gorda, a sculpture of two palm trees, one bent by hurricane winds.
It commemorates the city’s restoration since Hurricane Charley roared up the Peace River as a Category 4 hurricane in 2004.

From this point, there are two paths you can take. A winding path makes a loop around a large lawn back to where you crossed the marina drive.

To stay along the waterfront and continue upriver along the Peace River, follow the path along the seawall, which heads behind a row of condos.

After the path crosses a boardwalk on a curve around the condos, it enters Trabue Park. This narrow linear park is an urban mangrove forest.

Not long after the boardwalk ends, there’s a observation deck out onto the Peace River. Two compasses in the walk mark sharp turns along this stretch.

These compasses mark sharp turns in the Harborwalk

The Harborwalk ends at a compass at the east end of the park, 1.1 miles upriver from the Marina Store.

A boardwalk through the mangroves leads out to a large deck on the Peace River.

Mangroves along the Peace River

Return back through Laishley Park to the Marina Store at mile 0 to head westbound on the Harborwalk.

At another compass in the path, just past the boat ramp, make a sharp turn to parallel US 41 down to the harbor’s edge.

Paralleling US 41 towards the harbor

At the next large compass set into the path, a side trail to the right ends at an observation stop across the harbor from the marina’s mouth.

On foot, you can walk up the docks and make a walking loop out of this pretty corner of Laishley Park.

Side path to a bench and the docks

The compass is also where the Harborwalk makes a sharp left to go under the first of the two Harbor Bridges.

Between the Harbor Bridges

Between the bridges are several 90-degree turns as the walk sticks to the edge of the seawall and goes around two hotels, an event center, and a couple of tiki bars.

It’s a tight corridor after passing under the second bridge

At 11 acres, Gilchrist Park is the second largest of the waterfront parks, and has the best views of the harbor.

You enjoy them while walking or riding the Harborwalk, since it’s right up against a seawall.

The expanse of park has a lot of activity going on. The one must-stop is for the statue of Juan Ponce de Leon, just past a waterfront gazebo.

Ponce de Leon landed along the shores of Charlotte Harbor in 1513, although it’s not known where. This monument commemorates the conquistador.

Past a fishing pier and the pickleball courts, the Harborwalk arcs away from the water towards the shade of the oaks.

After crossing a parking area for a playground in the park, the walkway begins paralleling Retta Esplanade to reach the next park.

Between the Marina Store at Laishley Park and this parking area in Gilchrist Park, it’s a mile.

At Shreve Park, the Harborwalk is a straightaway. It’s one of the few places you have to pay attention to road crossings.

There are entrances to the Bayfront Center YMCA and the Punta Gorda Boat Club, both of which sit on the water.

In Pittman Park, the paved path meanders back and forth across the grassy waterfront.

Groupings of native plants accent this passive park, which is lined with mangroves along the harbor side.

Along the Harborwalk in Pittman Park

Where the Harborwalk ends within sight of Fisherman’s Village, 1.4 miles west of the marina, Linear Park begins at Retta Esplanade.

Linear Park makes a mile-long southeast diagonal through the historic residential area, following what was once a railroad line ending at the harbor.

A round-trip on the Harborwalk nets you 4.6 miles. Add in the round-trip along Linear Park for a 6.6 mile trip.

See our photos of the Punta Gorda Harborwalk

A city park with dramatic sunsets over a beach on Charlotte Harbor, Ponce De Leon Park is a delight for birders and paddlers, too.