While we rode the trail along Linear Park, it lends itself to walking because of its central location in the city.

That’s thanks to it being a former rail line built at the same time as the city was designed.

Colonel Isaac Trabue, who platted the town that became Punta Gorda, enticed the Florida Southern Railroad to end its line at Charlotte Harbor.

By 1887, the Long Dock was in operation, allowing railroad passengers and freight to transfer to steamships.

Checking out the map of Linear Park

A decade later, the railroad’s new owner, Henry Plant, had the rails removed and the terminus moved to shallower waters where steamships couldn’t go.

It was his way of eliminating the competition. It also meant this rail line was abandoned a very long time ago.

What’s pleasant about Linear Park is that the surroundings are mostly natural, right down to mangroves crowding the trail near its terminus close to Charlotte Harbor.

That also means wildlife gathers here. The trail parallels a natural creek that was channelized in the past, so birding is a popular activity.

It connects destinations worth visiting by foot, from our starting point at the History Park to the Library, the Visual Arts Center, and Fisherman’s Village.

Fisherman’s Village is within sight of the trail terminus

Open 24 hours, the trail has lamps along it to keep it lit after dark. There are benches spaced nicely for casual walkers.

We found water fountains with dog watering stations. Leashed dogs welcome, but be cautious as there are warnings about alligators in the trailside waterways.

A fitness zone with exercise equipment parallels the bike path, as well as a bike repair station. 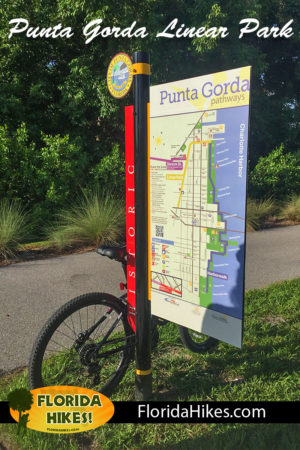 
From US 41 southbound in Punta Gorda, turn right on West Retta Esplanade after coming across Charlotte Harbor. Follow it for 0.6 mile along the waterfront parks to Shreve St. Turn left. Continue down Shreve St for 0.4 mile to History Park on the left. You’ll cross Linear Park en route, just before the library.

The library and History Park are the nearest public places to park for Linear Park. The two termini of the trail are shown above with bicycle icons.

From Interstate 75, take exit 164, Punta Gorda, and follow US 17 south (East Marion St) for 1.9 miles into Punta Gorda, crossing both northbound and southbound US 41 before you enter the historic residential district. Turn left on Shreve St. History Park is 0.3 mile on the right.

Punta Gorda History Park is a pretty little park and garden and worth a ramble in its own right.

But it also makes a good starting point for Linear Park, if you aren’t otherwise accessing Linear Park from the Harborwalk or Fisherman’s Village.

John getting his bike ready at History Park

Follow the side path north on Shreve Street past the library to meet the paved path at Linear Park.

To make it easier later to decide whether to add the Harborwalk to your walk or ride, turn right to head east through Linear Park.

The trail parallels West Virginia Avenue briefly before pulling away from it. Mangroves sprout along the adjacent canal.

Riding under the poinciana tree

There is a little bit of a wiggle to the trail before it passes under a poinciana tree resplendent in its red blossoms.

Cross McGregor Street and come up along the edge of the First Baptist Church, where a nice covered rest stop invites a pause.

Covered rest stop by the church

Crossing Gill Street, the trail parallels a broader canal through a more open greenway up to its eastern terminus at US 41.

A walk or ride to this terminus from History Park and back is 1.6 miles.

Return to Shreve Street and start down the path in the opposite direction. Here, it’s bounded on both sides by an urban mangrove forest.

Where the trail makes a curve and comes to a crossing at Olympia Avenue, it’s left the footprint of the old rail line.

Turning away from the railroad corridor towards the harbor

Instead, the greenway hugs the creek that is flowing out to Charlotte Harbor. The Visual Arts Center sits a block west of the road crossings at Olympia and Marion.

Both are relatively busy road crossings. Watch out for cars. This final stretch of trail is where the fitness zone is located. We mistook it for a playground the first time we passed it.

Riding up to the Fitness Zone equipment

There is also a boardwalk through the mangroves, and one last road crossing, at Retta Esplanade, to reach the terminus of the Linear Park trail.

That’s your decision point for continuing onto the Harborwalk or turning around here. A return to History Park from here completes 2.3 miles along Linear Park.

The return trip to History Park

Where Linear Park ends with Fisherman’s Village off to the left, the Harborwalk begins. It extends 2.3 miles through five parks along the Charlotte Harbor waterfront to its northern terminus at a boardwalk to the Peace River in Trabue Park.

A round trip on the Harborwalk is 4.6 miles, but you can take it up to any point you like. Gilcrhist Park offers great view of the harbor. A round-trip walk or ride on both trails is 6.9 miles.

Spanning 2.3 miles along Charlotte Harbor, the Harborwalk is a recreational gem in downtown Punta Gorda

A city park with dramatic sunsets over a beach on Charlotte Harbor, Ponce De Leon Park is a delight for birders and paddlers, too.