Riding the C2C from Mims to Maytown

One of the newest sections of the Coast to Coast Trail (C2C), the 7.5-mile segment between new trailheads at Aurantia and Maytown is one of the most rural segments of paved bike path in the region, with no road crossings.

When the predicted rains held off, Sandy I decided to take advantage of an overcast morning and ride a piece of the C2C that neither of us had ever seen.

While it had opened in February, this weekend was the first time that we could fit it into our schedule.

We parked at the new trailhead where Aurantia Rd goes under Interstate 95 in Mims and headed northbound. Leaving the trailhead is a bit confusing due to a long bicycle traffic circle. I’m not quite sure why it’s there, but the arrows indicate one way traffic.

Following the power lines, this new section of the Coast to Coast Trail led us into an interior of Florida landscape that is becoming rare to see.

We hadn’t ridden long before the roar of traffic on I-95 was replaced with the sounds of the birds and the breeze blowing through the tree tops.

Sandy kept reminding me to take another picture because the habitat had changed. We’d left the pines and entered where cypress, willows, and maples grew thickly amid floodplain forest and meandering marshes. A deer jumped across the trail in front of us.

At a bridge crossing in a cypress strand, we spotted a great egret, a juvenile black-crowned night heron, and a few ibis. Add woodpeckers, mockingbirds, red-shouldered hawks and a couple of swallowtail kites, and it was becoming a very nice birding trail.

While the birds were wonderful, the spring wildflowers were spectacular. Growing along both sides of the trail, yellow canna and purple pickerelweed populated the wetlands.

As the habitat changed again to a scrubby flatwoods, we saw uplands wildflowers.

In several places along the bike path we came to roundabouts and what looked like lift stations in middle of nowhere.

We can only suspect there are future plans for subdivisions out in this quiet corner of North Brevard, west of Scottsmoor. Those plans likely end where the power lines, water lines, and electric lines that followed (or were buried in) the trail end as well.

As the power lines ended, we continued up past a huge open prairie filled with wildflowers. I can’t recall ever seeing such a sight in all of my years of riding through Florida. It’s worth the ride just to see this beautiful prairie.

As the path left the prairie we came to a barrier across it. The sign read “Construction Area,” but was missing the “No trespassing felony to enter a construction site” signs that I had seen for months along the path along US 1 between North Titusville and Mims.

Looking up the trail corridor we saw no construction or equipment, just pavement. So we continued. When I started seeing open pastures and a couple of horses, I said “This looks a lot like Maytown”.

Sandy said “It can’t be, we haven’t ridden that far.” But the very next thing we saw was the old white house that we had found from the other direction off Maytown Road back when we were scouting the possible route of the Coast to Coast Trail a few years ago.

Next to the gate of the house, just like on our last visit, there was a pop-up shelter with balloons, bells and whirlygigs hanging from it.

Underneath it is a picnic table, a cooler full of ice cold Gatorade and water, plus a tableful of snacks. Hanging on the fence, a honor box.

Miles from any convenience store, at the end of the Maytown Spur Road, Vergie Clark had set up an oasis for those passing by in front of her “downtown” Maytown home.

She came out to visit with us as we took a break under her shelter. Her home was one of the old railroad houses.

It was built on the same location of the house her grandparents had built a very long time ago. Her father had been the Game Warden for the area back then.

We could finally see construction up ahead, and she confirmed our guess that a trailhead was being built. “It’ll even have bathrooms!” she said.

It is off Maytown Road, but not far. By the looks of construction it may be another month before it is complete. She also confirmed that the bike path is not quite complete yet towards Osteen, but is moving along.

As we were beginning our return trip, a fellow rode in from the other direction, off Maytown Road. We could see the trail curving into the woods past the trailhead under construction.

We asked him if he had seen the place where the trails meet. In addition to this portion of the trail into Brevard County – we’d crossed the line into Volusia County somewhere on this ride, but it was not marked – a spur of the Coast to Coast is also under construction up to Edgewater.

We’ve already ridden the completed section of that trail between its terminus at Rotary Park in Edgewater out to the trailhead just south of the SR 442 pedestrian/bike bridge.

Our friends Gus and Marsha, avid cyclists who live near there, told us that construction went on all last year. The cyclist confirmed that it was only a mile, mile and a half to the three-way junction of bike paths, but that the Edgewater spur did not go through yet.

The ride back seemed faster than the ride up, as it always does. It was a 15-mile round-trip from the Aurentia Road trailhead to Maytown and back.

We kept having to dodge gopher tortoises in the pathway, both big and little. Two of them looked massive and ancient. We didn’t stop for photos so as not to disturb their grazing, but we did make quite a few stops on the return trip for wildflower photos.

We met quite a few other riders, including some from Orlando who were just scoping out the area.

The Maytown trailhead was still under construction and not yet open when we visited, so we made this a 15-mile round trip starting and ending at Aurantia Rd in North Mims.

For the Aurantia Rd trailhead, follow US 1 north from Mims to Aurantia Rd. Follow Aurantia Rd west. When you see the I-95 overpass overhead, make the next right and you’ll see the trailhead. 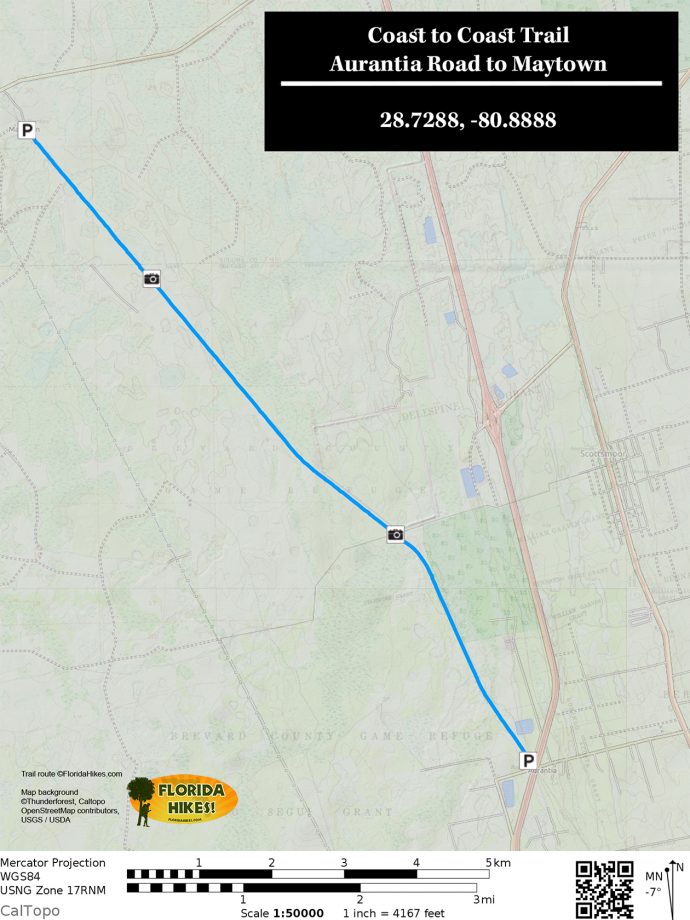