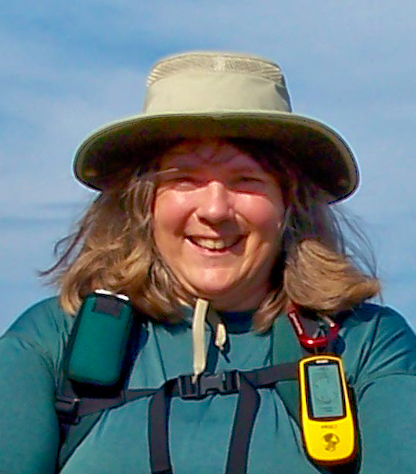 In preparation for launching a new version of the Florida Hikes website, I’ve been gathering my many years of accumulated resources together in one place. I puzzled mightily over how I could have so few GPS tracks in my files, since I knew I’d recorded them…heck, I have photos of me carrying a GPS and yet no track from the location!

GPS was kind of new and funky back when I started on the 50 Hikes series, and not especially affordable. When I got near the end of the book, I finally mustered up the courage to buy my first Garmin eTrex. It lasted about six months.  After it took an accidental dunking in the Peace River (where I discovered it floated), about a month later it started acting really weird and stopped working altogether. By then, I was in the thick of 50 Hikes in South Florida and utterly dependent on it, so I ran out and got another one. I’m on my third one now.

Still, there was this matter of GPS tracks. Back in 2001, I bought MapTech Terrain Navigator and used it, with the GPS, to generate my base maps for my publisher. Remember, Google Maps weren’t around in those days, and easy, affordable options were few and far between. This was a reliable one.  I’ve been through three computers since then, the last one dying with no chance of hard drive recovery.  And thus my problem. My tracks were gone!

Digging through old backups this weekend, I found a backup from two years ago with the MapTech files intact … but not in TXF format.  I emailed the support address I found in the software and received a prompt response from Ed Lecuyer, the product manager at MyTopo. He immediately offered to salvage my files and pointed me to a software upgrade where I could recover them. Within an hour, I had them all back and ready to pour into GPX files. I can’t thank Ed and these fine folks enough for salvaging years of work for me.

Now I know what I do and don’t have, since troubles with my various GPS units have made me lose data over the years.  I’m thrilled to have nearly 300 GPS tracks back in hand to start putting into the new Florida Hikes website, now under construction, and to use as the basis for the Hike-A-Week.