Snakes on a Trail

One week, three venomous snakes, and many harmless ones: all encountered on our early morning bike rides along paved trails on cool mornings.

While updating our trail information about bike paths in our region, we’ve been heading out to ride various trail segments within an easy drive of home.

Over the past week, we’ve focused on Volusia County. It’s been a wet season and there is water often standing on both sides of the trail. 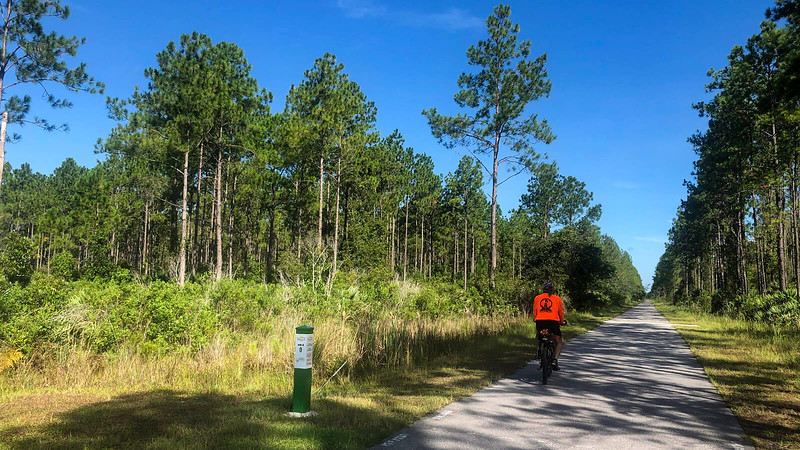 Riding into East Volusia on the Florida Coast to Coast Trail

Just south of Maytown on the Coast to Coast Trail we came across a pretty good sized water moccasin on the trail.

Sprawled out as if it was following prey, it was off to one side. We rode by carefully and quickly. 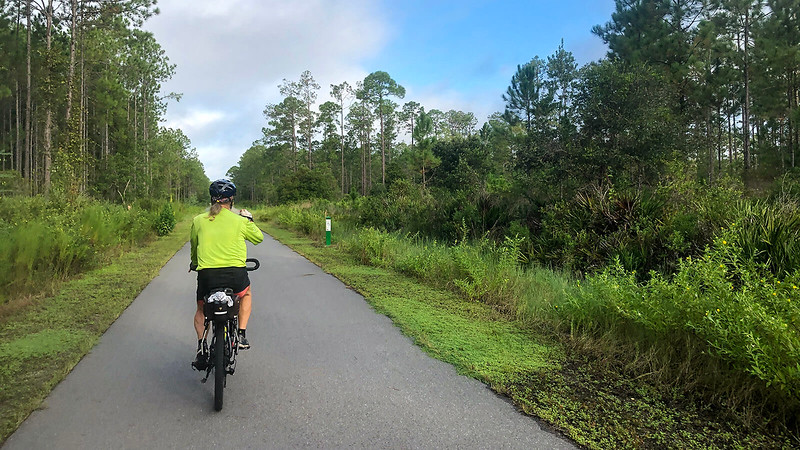 A few days later, along the East Coast Greenway not too far north of the Maytown junction, we rode around a snake stretched out on the trail.

As we got close, it was obvious it was a pygmy rattler.

We saw the pygmy rattler in this stretch north of Maytown

Yesterday, we took on another piece of the Coast to Coast Trail west of Farmton to finish our updates on the East Central Regional Rail Trail route.

We started at the Osteen Civic Center trailhead off SR 415 just under the big bridge and rode east to Guise Rd, where the trail currently ends. 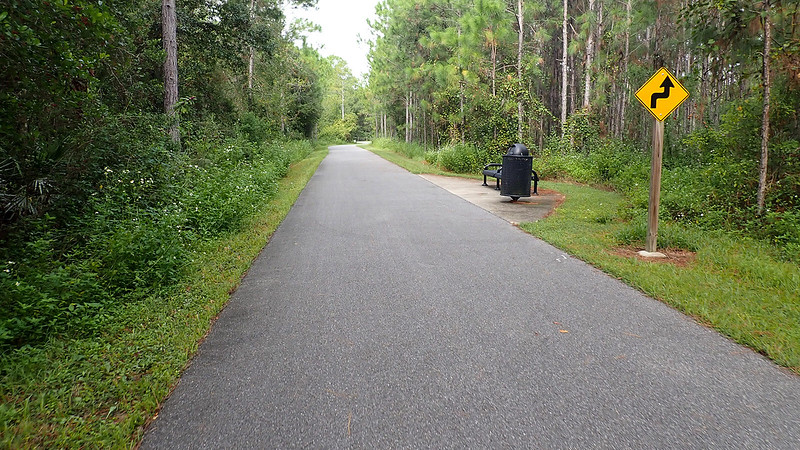 Along the ECRRT just west of Guise Rd

After turning around and heading back to Osteen we spotted a very large snake smack in the center of the bike path.

As we got closer, the alarms went off in my head.

Even from quite a distance I could see a flat diamond shaped head and a diamond pattern down its back.

It was a beautiful but very dangerous eastern diamondback rattlesnake, more than a couple feet long.

I stopped a safe distance away. My reason was twofold. I wanted to give it a chance to move off the trail, and to have a good look at it.

Sandy encountered a couple of very large diamondbacks as she was working on finishing up her Florida Trail end-to-end hike, but I hadn’t seen one in the wild in a very long time.

A zoom lens helped me get a close-up safely

Once I took a few photos, I got off the bike and walked on the grass on the far side of the trail from it, keeping the bike between me and the snake.

It didn’t move as I went by, nor did it rattle. But when I returned to the trail beyond it, it slowly turned its head in my direction.

While it was distracted by me, Sandy quickly rode by on the very edge of the trail as far from its tail as she could be.

It stayed right where it was, laying quietly in the same spot, as we continued on.

The eastern diamondback rattlesnake we stopped for in the trail

Just as we’d done with the two other venomous snakes we’d seen earlier, we tried to alert cyclists coming towards us to watch out for what was ahead.

Often they’d just smile and nod. They were wearing ear buds and didn’t hear a word we said.

Now that fall is here and the mornings are cooler, watch those paved paths a little more closely when you’re out for a walk or a ride.

There is nothing a snake likes better than sunning itself in a warm place on a cool morning. Like a nice dark asphalt trail.

Over the past month, we’ve seen more than a dozen species of snakes crossing the trails we ride.

We make a point of going around them so we don’t put them or ourselves in harm’s way.

Most of the time, they aren’t ones that will bite. But venomous ones that can strike are a danger for you.

Pay attention, and be careful out there.

Florida has six species of venomous snakes. Here is what they look like, and how to identify them when you are outdoors and encounter them in the woods