A connector trail to the Theodore Roosevelt Area from the Fort Caroline area, the Spanish Pond Trail at Timucuan Preserve provides a 2-mile round-trip into early Florida history.

On May 1, 1562, French Huguenots led by Jean Ribault landed at the bluffs of the St. Johns River, less than a mile from here. Claiming this land for France, they established a colony in 1564, with more than 200 settlers protected by Fort Caroline. They were not to live in peace for long, thanks to Spanish designs on “La Florida.” Spanish Pond remembers the encampment made by the attacking Spanish force.

0.0 > Starting at the parking area, the Spanish Pond Trail begins as a boardwalk within a dense, shady hardwood forest. As you see light at the end of the tunnel of vegetation, the boardwalk has a junction. Go straight ahead to the observation deck overlooking Spanish Pond, which is the destination for the majority of the visitors to this historic site.

The discontent on the new continent mirrored the ages-old rivalry between the Spanish and French in Europe. In 1513, Ponce de León – searching for gold and the Fountain of Youth – landed on the shores of what he called “La Florida,” and claimed it for Spain. When Ribault did the same for the French in 1562, followed by the first successful European colony in 1564 just over the hill here at Fort Caroline, it did not set well with King Philip II of Spain. The king considered the new land across the Atlantic Ocean the property of the Crown, given the many explorations of it by his conquistadors. It didn’t help that the French used their new position to attack passing Spanish treasure fleets. Nor that the devoutly Catholic Spanish despised the French Protestants.

When Don Pedro Menéndez de Aviles arrived in La Florida in 1565, he was charged by the king with both removing the French and starting a settlement. After an attempt to chase the French fleet, he landed to the south of the St. Johns River at the Timucuan village of Seloy and named it St. Augustine for the feast day of the saint, when the land had first been sighted. The French fleet sailed south to attack the Spanish, but were caught in a hurricane and wrecked.

Menéndez planned an overland attack on the French colony. 500 Spanish soldiers marched north from St. Augustine to this pond, led by two Timuca who had been wronged by the French. Here the soldiers camped, stalled by a downpour. The next morning, Menéndez led his troops to Fort Caroline, and tricked their way inside the ramparts at dawn. They killed more than 150 colonists, sparing only the musicians, the women and children. It spelled the end of the colony. Soon after, survivors of the French fleet were discovered at an inlet they were unable to cross (now known as Matanzas Inlet). Most of the French survivors, 244 in all, were massacred by Menéndez when they refused to rebuke their faith and accept conversion to Catholicism. Fort Matanzas recalls this dark history.

Looking out over the pond, it’s hard to imagine this bloody start to European settlement in Florida. It’s easier to focus on the bustle of bird life than to imagine the Spanish soldiers wading waist-deep across the pond to camp in the pine forest beyond it, plotting their morning attack on the French colony.

0.1 > Leave the observation deck and head down into the woods. Make a left. The trail is hard-packed limestone under a bower of wax myrtle and dahoon holly and is blazed with red blazes on posts. Past a bench, you cross a boardwalk flanked by slash pines. Dense masses of greenbrier and grapevines grow up over the saw palmetto understory in the pine flatwoods beyond.

0.2 > The next boardwalk crosses a marshy part of Spanish Pond. Watch for the tall blooms of rabbit tobacco, and the blackberry bushes yielding succulent blackberries in June. Pass an old road as the trail meanders under sparkleberry and past Hercules’-club.

0.4 > You reach a bench at a break in a fence—joining together two separate units of Timucuan Preserve. Unless you’re ready for a climb, this is a good turn-around point. The hardwood hammock yields to oak scrub as you begin the ascent into the Theodore Roosevelt Area.

0.7 > Passing a trail marker, you arrive at the junction with the Timucuan Trail, which loops around the massive midden along the river bluffs. The Spanish Pond Trail continues straight ahead, hooking to the right and downhill. Follow its meanders through the hardwood hammock, passing two benches along the way.

1.0 > You reach the 4-way intersection of trails in the heart of the Theodore Roosevelt Area, where there is a bench and a map. This is where the Spanish Pond Trail concludes. Turn around and retrace your steps, or enjoy a longer hike by rambling through the loop trails of the Theodore Roosevelt Area before returning back to the parking area at Spanish Pond; consult the maps at key intersections along the way to ensure you’re on the correct return route.

2.0 > Return to the Spanish Pond trailhead 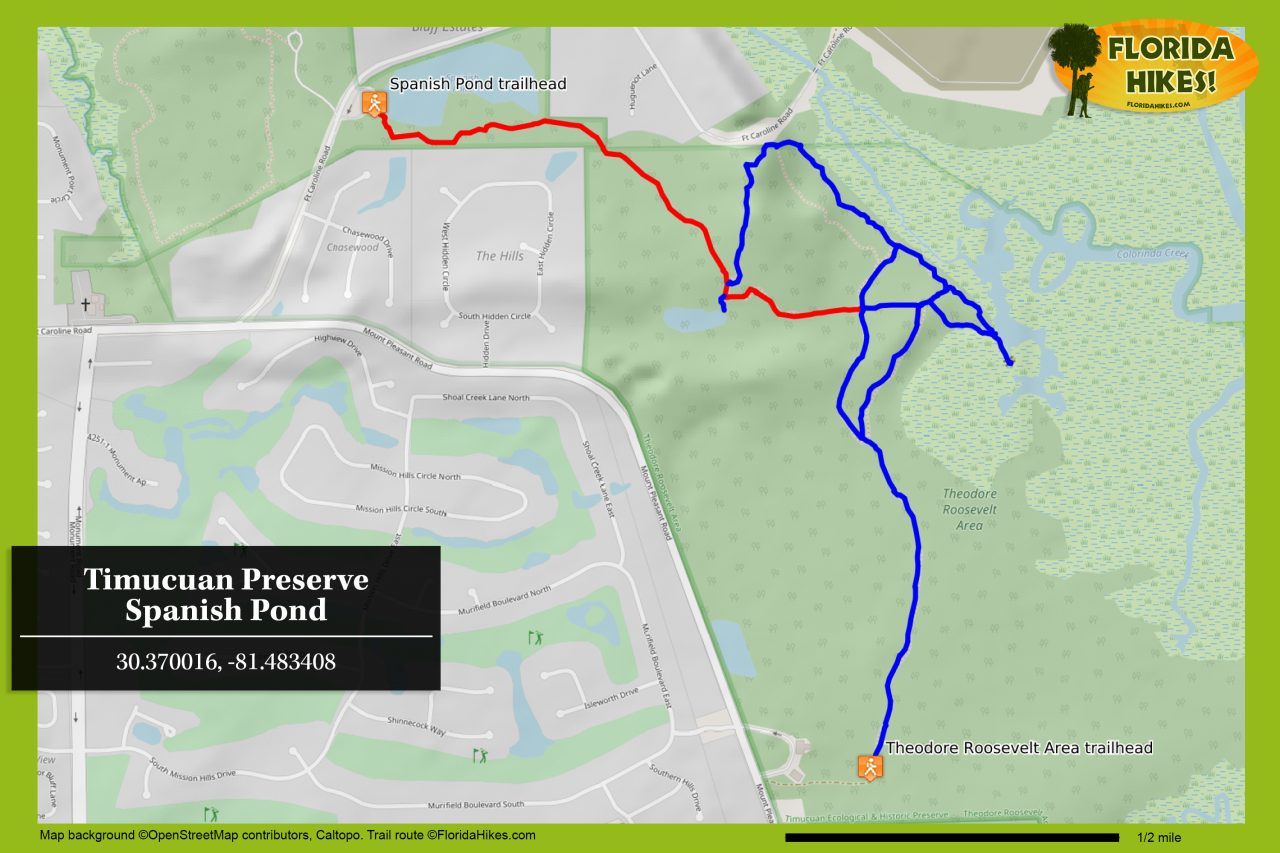