A collaborative effort between Pasco County and Southwest Florida Water Management District, Jay B. Starkey Wilderness Park is one of the larger pieces of public land on the Suncoast.

Named for the rancher who last ran cattle across these pine woods and prairies, it protects a massive landscape and watershed between the Pithlachascotee and Anclote Rivers.

The park itself is over 8,300 acres. Including adjacent Serenova and Anclote River Ranch preserve lands, there are more than 19,000 acres of watershed in the public trust as Starkey Preserve.

The proximity of Starkey Wilderness Park to densely populated New Port Richey means it is a popular getaway for recreation.

A bench along the Day Use Loop

No matter whether you’re looking for an easy hike with the kids, an overnighter in the backcountry, miles of offroad trails to ride, or paved paths to cycle, they’re all here.

The park also features several camping options, too, for both groups and individuals.

There are day use picnic areas, a playground, an environmental education center, and a birding trail and bird blind constructed by the local Audubon chapter.

Campsite 1 along the Starkey Wilderness Loop

Campers must have reservations for backcountry sites. Call the park in advance. 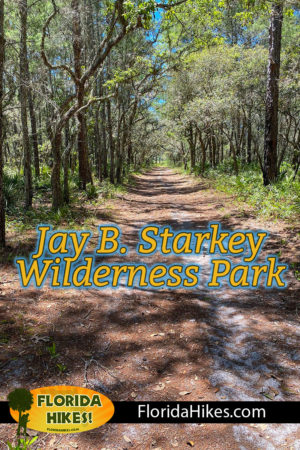 
From the Suncoast Parkway, follow SR 54 west to Little Rd (CR 1). Drive north 2.2 miles. Turn right on River Crossing Blvd and go 1.3 miles, then make a left on Starkey Blvd. Continue a quarter mile to make a right on Wilderness Road, which leads into the park and ends at the very back of the park near the parking areas by the Nature Trail. Other trails begin near the day use area and horse corral area.

While the park is named for Mr. Starkey, who was still running a ranch-based ecotour adjacent to the park when we first visited, ranching on this land dates back much farther.

James McNeill, an Ocala native born on land acquired by his family under the Armed Occupation Act of 1842, served as a Confederate officer in the Civil War.

He was likely able to obtain acreage along the Anclote River thanks to the Southern Homestead Act of 1866 making more homesteads available in Florida.

In 1882, he paid the state 90 cents an acre for the land he built his homestead on. Little remains of it today, but there is a historic marker in the woods and a family cemetery.

An ancient oak near the Pithlachascotee River

Over more than a century, there were turpentine camps and timber operations, a raised bed railway for logging and bridges built across the rivers.

Archaeological sites in the park date back to Florida’s earliest peoples, who would seasonally move in from the coast for hunting or agriculture.

Park staff and volunteers lead interpretive hikes to destinations within the park that are off the beaten path but historically significant to the region.

A Florida box turtle we encountered here while hiking

Starkey Wilderness Park is a place for trails. Since we first visited it in 2001 (and returned in 2009) to explore the backcountry loops and the nature trail for the first edition of 50 Hikes in Central Florida, its offerings have continued to expand.

The 1.3-mile Nature Trail extends from the northernmost parking area through lush hardwood hammocks into the Pithlachascotee River floodplain.

Blazed in green, it has numbered posts corresponding to interpretive stops along the walk. A spur ends amid cypress knees near the dark water of this sluggish waterway.

Dense hammock along the river floodplain

When we last visited, near Shelter 5 there was a blue routed sign with a bluebird on it and blue blazes leading to a Bluebird Trail, which connected to the Nature Trail.

Along lily-dotted Grassy Lake is a very large bird blind, a project of West Pasco Audubon.

The group holds programs at the Starkey Environmental Education Building the first Saturday of each month, and leads birding hikes here.

Among the birds spotted at Starkey Wilderness Park are the Florida scrub-jay, sandhill crane, American kestrel, swallow-tailed kite, and, of course, bluebirds.

Blazed orange, the Starkey Wilderness Loop is a chain of loop trails extending east across the central portion of the preserve.

It starts adjacent to the horse corral and campground and mainly follows old forest roads.

The trailhead for this loop adjoins the horse corrals

The nearest loop in the chain is 1.6 miles and circles a wetland, followed by a 3 mile loop marked by a sign and a prominent bench. These are considered the Day Use Loop.

Although we measured it at 1.6 miles from the corral trailhead, signs call the short loop the “1.9 mile loop.”

Beyond these loops, you can continue along a 0.6 mile linear connector to the next loop of 5 miles, which is home to two primitive campsites.

Connecting to Campsite 2 by way of another linear connector that partly uses the paved bike path through the backcountry, there is one final loop at the eastern end of the preserve.

This final 3 mile loop is in a very open scrubby flatwoods landscape, and utilizes the paved trail for its northern side.

Scrubby flatwoods at the east end of the park

Putting all three loops and the two connectors together, you can hike 13.9 miles. Backpacking is welcome. There are three backcountry campsites, all of which must be reserved in advance either online or by phone.

Numbered hiker symbol signposts are at intersections, but we have yet to find an official map that shows how they correspond to the actual route.

Trail marker in the middle of the Central Loop

A paved bike trail, the Starkey Trail spans 7.5 miles across the park, connecting cyclists with the 42-mile Suncoast Trail heading north to Brooksville.

Both are part of the statewide Florida Coast to Coast Trail between Titusville and St. Petersburg.

The paved trail parallels Wilderness Drive after leaving the woods and exits the park to join a side path down CR 1 to work its way through bike path connections to the Pinellas Trail.

Their trails interconnect with the Starkey Wilderness Loop but mainly stay to their own routes. Start your ride from Parking Lot 10 in the day use area.

At the eastern end of the bike trails is Deliverance, which winds around for 5 miles east of the power transmission lines to connect the two 7 mile trails together at their ends.

Download a map of the route from the SWAMP Mountain Bike Club website from the button at the bottom of this page.

Marked equestrian trails extend 7.5 miles from the corral and parking area east to the south of the Starkey Wilderness Loop and the off-road bike trails.

These run through vast open scrubby flatwoods and along the floodplain of the Anclote River, and may be wet in places.

In addition to the backcountry campsites along the hiking and biking trails, Starkey Wilderness Park offers 16 tent sites and 8 primitive cabins in their camping area.

There is a picnic shelter for the use of the tent campers as well as a bathhouse with showers facilities. Camping must be reserved in advance. Do so online or call the park.

Primitive tent campsite near the trailhead for the Starkey Wilderness Loop

Stretching 41.3 miles from the Tampa metro to north of Brooksville, the Suncoast Trail is one of the longest continuous paved bike paths in Florida

James E. Grey Preserve hugs the shores of the winding Pithlachascotee River, an 80-acre preserve of natural shorelines with an extensive accessible boardwalk.

A place to play Robinson Crusoe for a day or overnight, Anclote Key Preserve State Park is an offshore gem in the Gulf of Mexico made up of four islands within sight of Tarpon Springs

Our thanks to Al Force (FT Class of 2015) for tackling on-the-ground research and photos to help us bring our trail information up to date.