Florida’s most unique arboretum features a circle of sycamores honoring the Apollo missions, all here thanks to an Apollo 14 project for the U.S. Forest Service to take tree seedings into orbit around the moon.

Florida’s newest arboretum is in Titusville. But it isn’t one you’d expect.

Instead of showing off trees of every species, all of its inhabitants are virtually clones, the descendants of a tree that traveled around the moon before its seed was sprouted.

Planted in a circle, each of the twelve trees honors the twelve manned Apollo missions that blasted off from our shores.

Meet the Moon Tree Garden. We attended its ribbon-cutting on July 12, part of the celebration of the Apollo 11 50th Anniversary at Kennedy Space Center.

All of the trees are sycamores, which grow quickly. All were propagated from an original moon tree at Mississippi State University and donated by the Moon Tree Foundation.

Each adjoins an interpretive installation honoring the crew of each of the Apollo missions.

They surround another new installation, a sculpture of the Apollo 11 crew – Michael Collins, Neil Armstrong, and Buzz Aldrin – looking out over the Banana River towards the launch pads.

Called “The Eagle Has Landed,” it’s a detailed work of art, honoring both the crew and the men and women who made their spaceflight possible. It was commissioned by Rocket Mortgage for the Apollo 11 anniversary.

A bouncy walkway of recycled materials circles the arboretum, which is also accented with floral plantings and native sabal palms.

Starting tomorrow, visitors to Kennedy Space Center will be able to wander through this new garden when they take the tour bus to the Apollo Saturn V Center.

Each of us who attended received a small program for the event that we can plant at home to sprout wildflowers.

A joint effort between NASA, Delaware North (operators of Kennedy Space Center Visitor Complex), and the Moon Tree Foundation, the roots of the Moon Tree Garden go back to Apollo 14.

Rosemary Roosa, who started the foundation in 2017, stood at Kennedy Space Center fifty years ago this week with her father, watching Apollo 11 launch for the moon.

His companions, Alan Shepherd and Edgar Mitchell, walked on the moon. In his personal bag, Shepherd snuck a couple of golf balls and a homemade six-iron head on board, becoming the only man to hit a golf ball on the moon.

At the same time, Roosa earned a different first. He carried the first seeds into space in his personal bag, wanted to discover how space radiation would affect them.

Before becoming a test pilot with the Air Force, Roosa was a smokejumper with the U.S. Forest Service, jumping into forest fires in Oregon and California in 1953.

Once he was tapped for Apollo 14, the Chief of the U.S. Forest Service reached out to him and NASA about carrying tree seeds into space. Roosa was happy to do so, carrying 500 seeds with him on their behalf as he orbited the moon.

As Rosemary explained, “when the containers came back to Earth, they popped open under pressure. The seeds were scrambled and some of them were lost.”

Still, the U.S. Forest Service had plenty to work with. They’d chosen seeds that would be appropriate in the Southeast (sycamore, sweetgum, and loblolly pine) and in the Northwest (Douglas fir and redwood). So they were divided between forestry stations in Mississippi and California.

Nearly 450 seedlings sprouted. Some were planted at forestry stations next to similar seedlings. No discernible differences were detected.

Most of the seedlings were passed along to state forestry offices to plant during Bicentennial celebrations. In 1975, the first Moon Tree planting, a sycamore, occurred in Philadelphia’s Washington Square Park, with Russo in attendance.

Eight years ago, we came across a small plaque about a Moon Tree dedication ceremony for a loblolly pine at a state park in Florida. We’d never heard of such a thing, but the setting for it seemed appropriate.

It sat between tall pines in the Forest Capital Museum State Park in Perry, Florida’s only museum dedicated to the timber industry.

The first-generation Moon Tree at the Kennedy Space Center Visitor Complex, a large sycamore planted in a courtyard between buildings in 1976, was a favorite for Rosemary Roosa. She visited it often. But in 2017, Hurricane Irma knocked it over.

At the ribbon-cutting, Scott “Shuttleman” Phillips, an engineer who worked with wood and with the Space Shuttle program, presented Rosemary with a sculpture made from the wood of that tree, incorporating Apollo mission insignias. 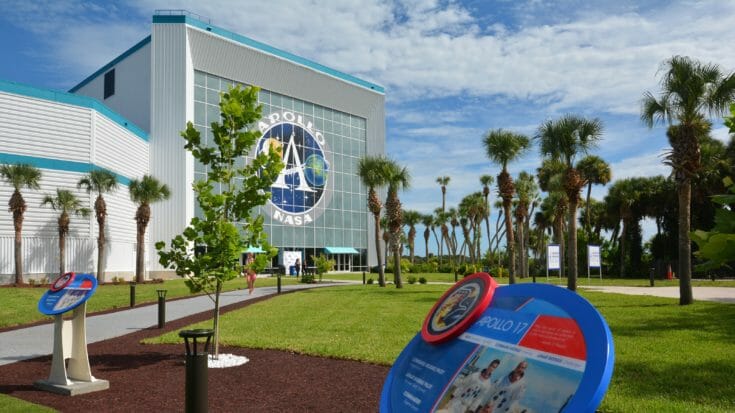 Opening just in time for the 50th anniversary of the first moon landing, the new Moon Tree Garden sits in front of the recently renovated Apollo Saturn V Center. Each of the trees is second generation, propagated from an original moon tree at Mississippi State University. 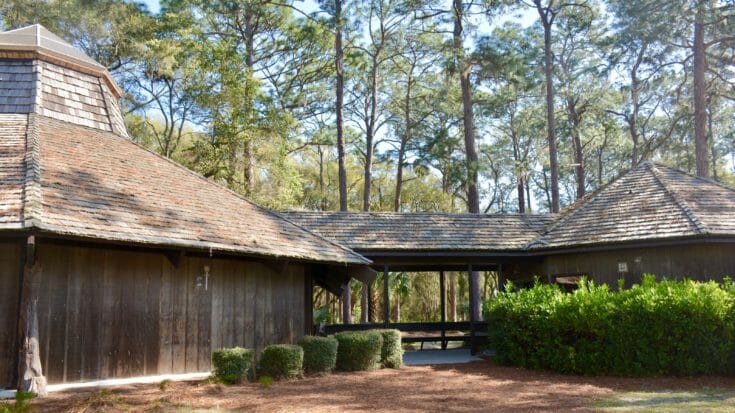 Telling the story of Florida's timber industry and the woods that were valued commercially, this small state park in Perry also has a pioneer homestead to explore. Ask a park ranger to point out the location of the lobolly pine Moon Tree planted here in 1978 near the rear of the park.

Just a couple of blocks south of the Palatka-Lake Butler Trail, the Keystone Heights Library was the recipient of a sycamore Moon Tree in 1984 thanks to a local nursery owner. A new dedication plaque was added in front of the tree in 2015. 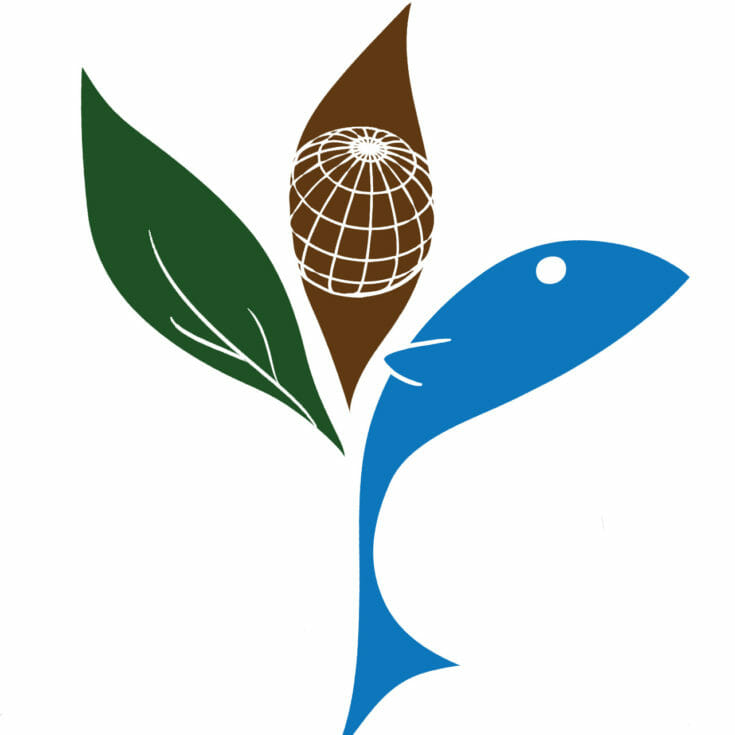 After the Apollo 14 mission, three Moon Tree seeds were provided to the School of Forestry at the University of Florida, and germinated there. Two loblolly pines and a sycamore were planted without fanfare near the building. While the loblolly pines didn't survive groundskeeping injuries, the sycamore may still be there. 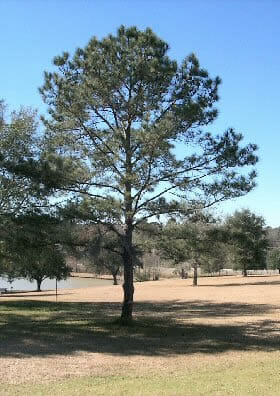 A loblolly pine Moon Tree seedling was planted in 1976 in front of this Tallahassee building named for Florida's long-time Commissioner of Agriculture (1961 until 1991). An administrative building for the Florida Forestry Service, it is located at 3125 Conner Boulevard, Tallahassee. 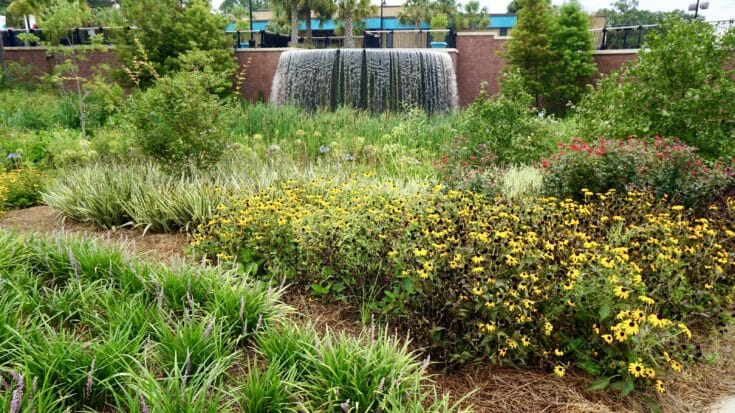 Entirely resculpted and renovated since the planting of a sycamore Moon Tree seedling, Cascades Park now serves as a community gathering place in downtown Tallahassee and a northern terminus for cyclists heading down to the Tallahassee-St. Marks Historic State Trail. We don't know if the tree survived the park's renovation, but if you do, please let us know.