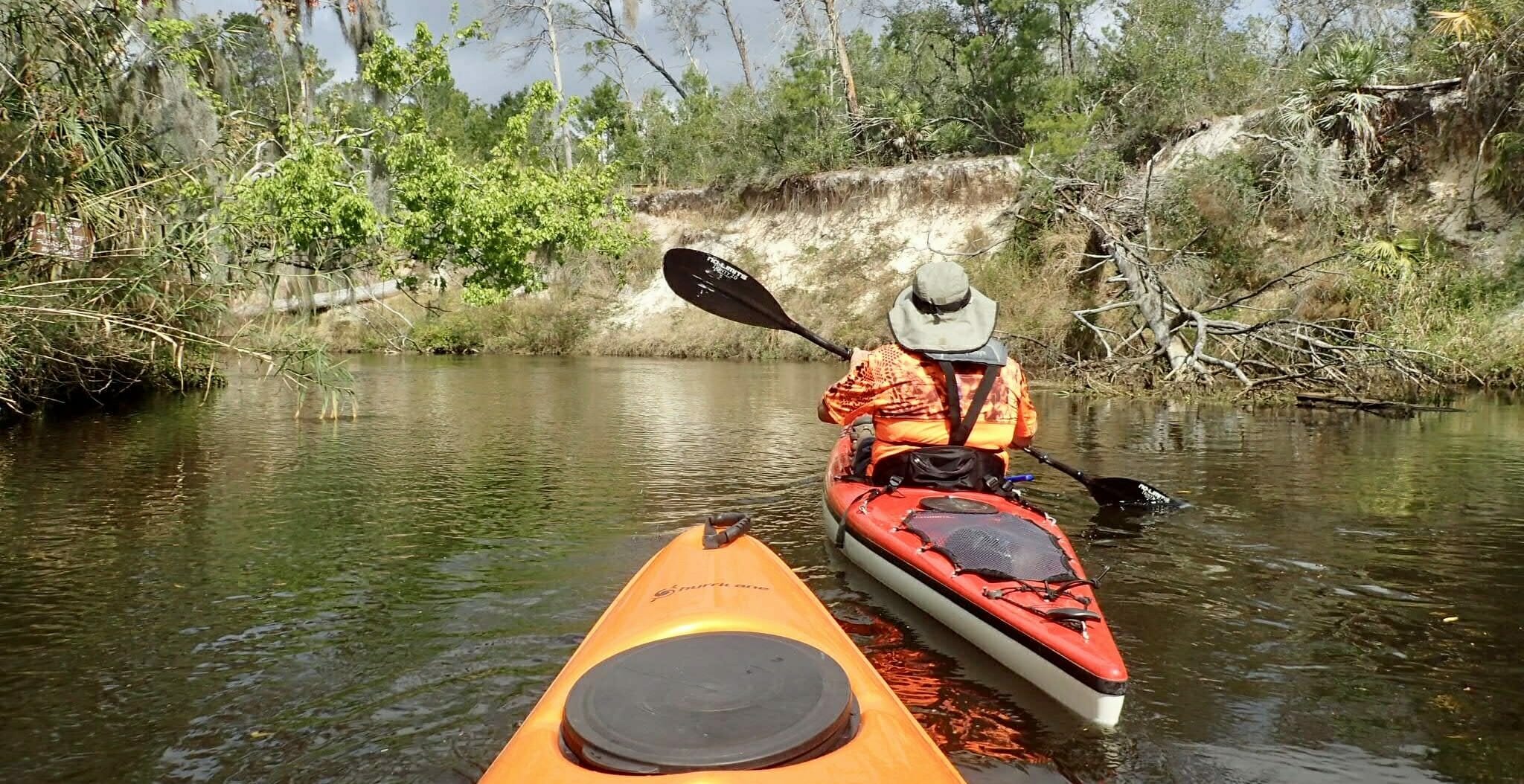 A chance meeting of old friends leads to my first paddling trip down Turkey Creek and the opportunity to connect with our local paddling club, the Space Coast Paddlers, by talking about our most recent guidebook.

Leaving our local Italian restaurant after dinner a couple of weeks ago, I noticed two familiar faces behind us. It’s been more than eight years since I left my job at Kennedy Space Center, so it took a moment before I could recall their names.

Luckily, the couple was parked beside us. That gave me the time to finally say “Steve and- M.” I knew Steve’s wife’s name began with the letter M but I just couldn’t recall it.

“Monique,” she said. After not seeing each other for many years, we did a little catching up right there and then.

It wasn’t long before we were talking about hiking, paddling, and playing outdoors. I’m still amazed by the special bond that people who love enjoying the outdoors have.

As I gave them a business card as we parted ways, we talked about getting together for a paddle or hike in the near future. It wasn’t long before Monique asked if we might be available to give a talk at the Space Coast Paddlers monthly meeting the following week, and if we would like to join them for a paddle.

Because of Steve and Monique’s unique skills they had been quickly picked up at the end of the Shuttle program by one of the companies supporting the replacement space vehicles heat shield and thermal systems. Monday was a day off for them, and they had already planned to go paddling on Presidents’ Day.

Sandy and I had presented 50 Hikes in Central Florida the week before at our local Florida Trail Association chapter, so we agreed to do the talk again. This time it would be in Eau Gallie instead of Melbourne. Sandy was in the middle of working on our website, so she suggested that I join them for the paddle.

It’s been some time since I took out one of my own kayaks. I’ve become spoiled as a travel writer. Nearly every paddling trip I’ve done in recent years has been with a group and the equipment is provided. I bring my own PFD and carbon fiber paddle, but those are always easy to find.

My kayaks and roof rack are stored offsite. I found the kayak I wanted to take, but my kayak holders were missing. When I told Monique of my problem, they offered to loan me a boat from their little fleet. We’d simply meet at the put-in.

On a beautiful Presidents’ Day morning, I grabbed my gear and headed for a put-in at a place I had never been before. Following my GPS, the route took me through a large subdivision in Palm Bay and then down a road to Goode Park and Turkey Creek.

Steve and Monique were already there. After years of paddling together and leading groups, they are efficient. The kayaks were out of their truck, loaded, and ready to hit the water.

As we paddled away from the ramp, we fell into paddling together like we had been doing it for years. The first leg of our out-and-back trip was along the back sides of homes and docks. As they were mostly only along one side of the creek, there’s still a bit of wild.

We used this section of the paddle to do a little chatting and catching up. Some people get together with old friends at a bar or restaurant to catch up. For us, doing it out here on the water felt natural.

As we paddled under a bridge, they told me that we were entering Turkey Creek Sanctuary. The creek became a narrow twisting path with a turtle on nearly every branch or limb sticking out of the water.

When I told them that I had never seen so many turtles while paddling, they said “Just wait. You haven’t seen anything!” and they were right.

At one bend, I lost count at twenty turtles. They were so used to paddlers that they just watched us go by. Because the passage was so tight, I was paddling so close to them that my stroke almost knocked them into the water. Most never flinched.

Rounding a bend, I noticed a sign to please keep off the bluffs to prevent erosion. I never expected to see river bluffs along this paddle.

When we came to bluffs towering over our heads with boardwalks and an observation deck along the tops, I had to smile.

Turkey Creek Sanctuary is a beautiful place to see from either the land or the water. As we paddled by a nicely-built observation deck at the preserve’s canoe launch, Steve pointed to the sign dedicating it to Oli Johnson, a retired ranger who was a friend of theirs.

Around the next big bend, the water became wider and more canal-like. Up ahead we could see the dam.

It was built to hold back the waters from where the creek had been turned into a big drainage ditch through Palm Bay a long time ago. We’re grateful they stopped and left the rest of this waterway wild.

It was time to turn around and take advantage of the current that we had been paddling against upstream. While floating back downstream, we spotted a couple of three-foot alligators tucked along the shoreline.

A five-footer lurked where we reached the canal behind the homes. That alligator quickly swam out of the underbrush and turned around as soon as it saw us. Monique said “That’s good. Just what he should do when seeing people.”

It was a short but beautiful paddling trip. How do you top something like that? A great lunch at a local Mexican restaurant! We’re not talking about some fast food place, but El Sombrero in Palm Bay, which was new to me.

When we ordered the fresh guacamole salad, it was brought and made right at our table. A nice day on the water, reconnecting with old friends, and a tasty lunch. I’d call that a good Presidents’ Day holiday.

Two days later, Sandy and I arrived at the Eau Gallie library for the Space Coast Padding Club meeting. The club’s president wasn’t feeling well so Steve and Monique led the meeting and introduced us the the rest of the group.

They were a nice bunch of folks who were talking about their plans for the “retirees’ weekly paddle” the next day, and their upcoming group campout and paddle on the Loxahatchee River. Among the paddlers in the room, what a pleasant surprise to meet Oli, the retired ranger for whom the observation deck in Turkey Creek had been named for.

After the meeting, a group of club members met at a little Italian place, San Remo, just a few blocks from the library. We enjoyed a nice dinner together, which gave Sandy and I more time to get to know the group a little more.

Thanks to Steve and Monique for a cool paddle, and for introducing us to the Space Coast Paddlers! 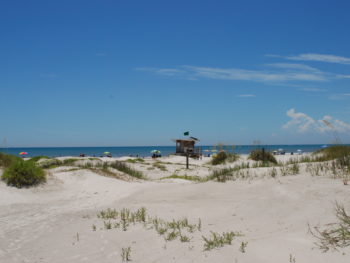