Edged by rocky freshwater marshes these hammocks help sustain the viability of the Key deer population.

Open daily from a half hour before sunrise to a half hour after sunset. Bicycles are not permitted on the trail, and pets are not advised so as not to scare away wildlife. Please stay within the marked path to avoid brushing into any poisonwood, which is found all over Big Pine Key and is right along this trail.

From US 1, follow Key Deer Boulevard past the shopping center where the refuge visitor center is located. Pay attention to the speed limit as they are slow for a reason: you may see Key deer cross the road along this stretch, especially at dusk and dawn. A bike path parallels the road the length of the refuge, so you can also park at the visitor center and bike up to the trails. Be sure to lock your bike if you go for a hike. The turnoff for the parking area is on the left past Blue Hole, 3.2 miles from the visitor center. This trail adjoins the accessible Mannillo Trail at the same trailhead.

We can all thank the namesake of this trail, Jack C. Watson, for bringing the Key deer back from the edge of extinction. In the early 1950s, the Boone and Crockett Club, a venerable sportsmans’ organization, donated the cost of an annual salary to hire Watson as a game warden for the refuge to prevent poaching that was leading to their extinction.

Named as the first manager of National Key Deer Refuge before it was even formally established, Watson managed the refuge between 1954 and 1975. Under his watchful care and campaigns to eliminate poaching and protect deer from cars, the population grew from 50 to more than 300. The last population count, taken after Hurricane Irma, estimates around 950 deer throughout the Lower Keys.

0.0 > A map is displayed at the Wildlife Trails kiosk. Start at the sign honoring Jack Watson. Surface limestone outcrops all around you as the trail curves left past a stand of poisonwood. Unlike the Keys to the north, the ancient reef rock under the Lower Keys is overlain with a layer of oolitic Miami limestone, like the bedrock of the Everglades. As a result, the exposed limestone dissolves into a rough karst landscape of pinnacles and solution holes where pine rocklands thrive.

0.1 > Stay right at the fork to begin the loop, which leads you into an expanse of pine rocklands. If you feel it looks familiar, but not quite, that’s because this habitat has become quite rare in Florida. The spindly pines are known as Dade County pine and are extremely resistent to insects and rot, which made them a prime target for logging by early settlers in South Florida. The extremely rocky floor of the pineland frustrated those same settlers, who used dynamite to destroy it. While this habitat once stretched across what is now Miami-Dade County, it is now as endangered as the deer themselves. National Key Deer Refuge protects more than 80% of the remaining pine rocklands of the Florida Keys.

0.2 > The tropical understory contains poisonwood, wax myrtle, scattered thatch palms, and occasional silver palms, the palms very small compared to the cabbage palms found everywhere in Florida. The trail turns past a side road that leads off into another part of the refuge. As the trail curves, you see a sparkle of water through the underbrush.

0.3 > Throughout this portion of the forest are freshwater wetlands that accumulate in rocky depressions in the rugged karst terrain. The solution holes trap rainfall, providing critical freshwater resources for the Key deer as well as creating cool, damp spots where ferns and orchids grow in miniature gardens. Alligators are known to live throughout these wetlands, so be alert as you walk through the sawgrass. Mosquitofish swim in the shallows, chowing down on mosquito larvae.

The trail rises, slightly elevated to prevent flooding, and you see deer trails broken through the underbrush. Notice the wonderful quiet, just the breeze (or Key deer) rustling through the palmetto fronds.

0.5 > Buttonwoods grow out of a series of solution holes leading up to the edge of a tropical hardwood hammock, which affords some patches of shade through this section. The trail curves left past a satinleaf tree and some thatch palms, and a cabbage palm rises out of a deep solution hole.

0.6 > The landscape opens back up into pine rocklands with their rugged rocky forest floor and scattered solution holes filled with water. Sawgrass grows up along their edges. Cross a culvert over a mosquito control ditch etched into this rugged landscape.

0.7 > Past another small collection of silver palms, reach the end of the loop and continue straight ahead.

0.8 > Exit back to the Wildlife Trails trailhead.

The Watson Trail is the loop shown in RED on the map below. 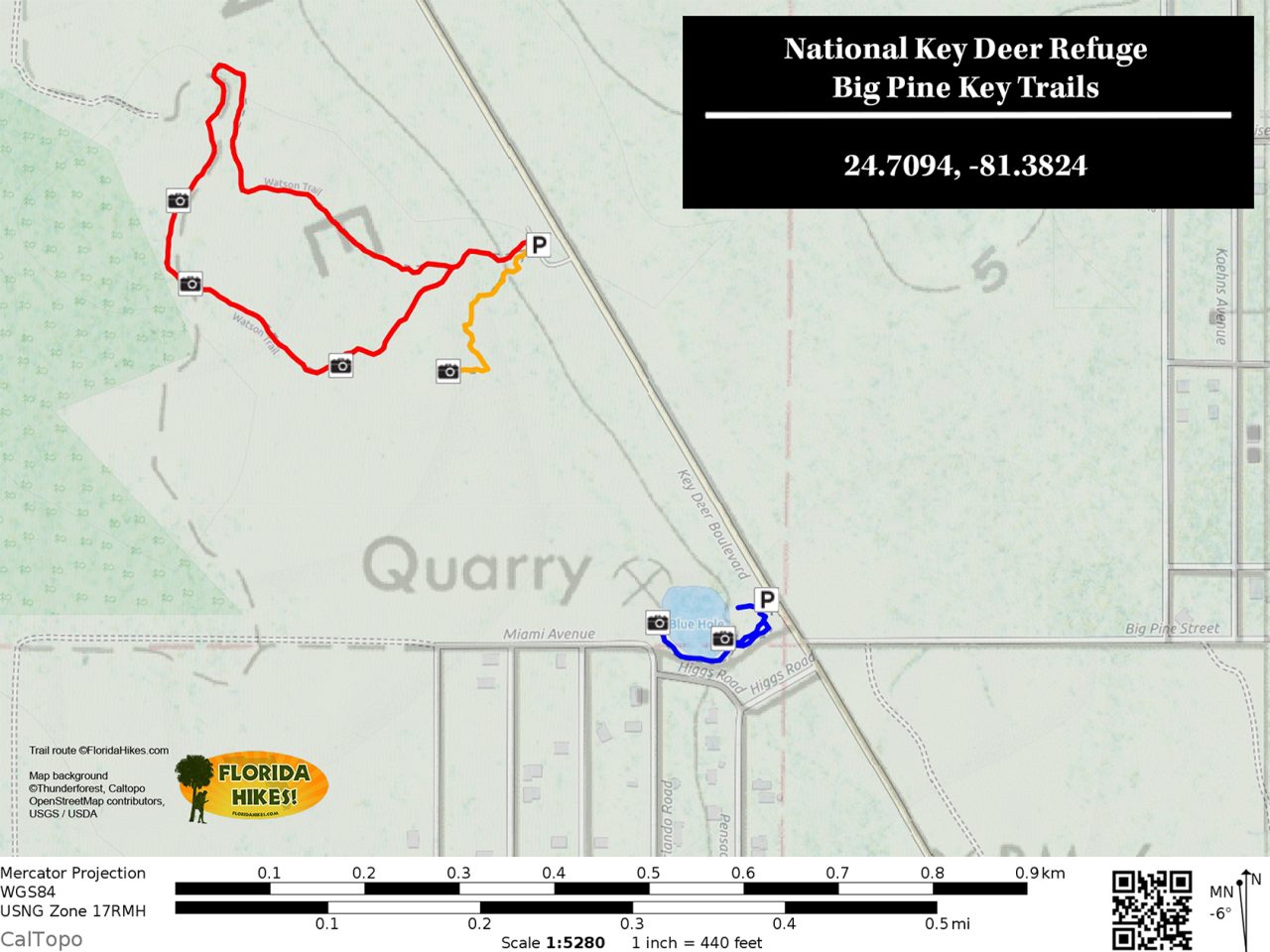