Tunneling through mangrove forests and palm hammocks to overlooks on Tampa Bay, the trails of Weedon Island Preserve offer unique perspectives for birders while interpreting one of Florida’s ancient settlements.

Tunneling through mangrove forests and palm hammocks to overlooks on Tampa Bay, the trails of Weedon Island Preserve offer unique perspectives for birders.

With a network of easy accessible paths and tougher natural ones and and a variety of lengths of hikes, the preserve delights hikers while also interpreting one of Florida’s ancient settlements.

No pets or bicycles permitted. Open 7-sunset except Christmas and the day after Thanksgiving. Closing time is posted at the front gate. Be sure to use insect repellent and sun protection. Parts of the trail system have no shade, and the parts that are shady tend to have a lot of mosquitoes.

Open Thu-Sat 9-4 and Sun 11-4 (closed holidays), the Cultural and Natural History Center immerses visitors in exhibits along a timeline of this island, from its earliest settlement by the Weeden culture through an airport that was here through the 1950s. This is also where you’ll find the restrooms.

From Interstate 275, take the Gandy Blvd (US 92) exit and head east for 2.7 miles, turning off onto San Martin Blvd just after the large racing/poker facility on the right.

Continue a mile and turn left on Ridgeway Drive at the Great Florida Birding Trail sign. It becomes Weedon Drive and enters the preserve. There are two parking areas: a very small one that provides direct access to the Boy Scout Trail (27.8522, -82.6094), and the large one in front of the Cultural and Natural History Center.

Weedon Island Preserve is one of Florida’s more significant archaeological sites. A dugout canoe was discovered in the mud here and carbon-dated to 900 A.D.

From other excavations of middens and mounds along Tampa Bay, archaeologists have constructed a record of a people who hunted, fished, and gathered along these shores in ancient times. One site in the preserve, Yat Kitischee, was occupied for more than a thousand years. Artifacts found from what is called the Weeden Island culture date back to 200 A.D.

This preserve is much larger than you’d think – more than 3,100 acres – since it stretches from here northward along the coastline of Tampa Bay all the way up to the St. Petersburg-Clearwater Airport.

The trail system, however, grew around the core upland area called Weedon Hammock when this was a Florida State Park. In 1984, the local Florida Trail Association chapter was asked to build trails for the park, and what they created was later incorporated into the county’s expanded trail system. The county took over management of Weedon Island in 1999.

On a trail system of less than four miles, you can hike it in many different ways. There are both spur and loop trails as a part of the trail system, so some round-trip hikes are necessary. We detail our favorite 4.6-mile route in the new edition of 50 Hikes in Central Florida.

For a short and easy loop, tackle the very scenic Boy Scout Trail. From the small parking area at its trailhead, the trail loops around a maze of mangrove-lined waterways, mostly a tunnel in deep shade for much of the walk. Each of the wooden bridges has a name painted on it by the Boy Scouts that maintain this trail, and those names are shown on the official park map.

Peek out through the mangroves to watch ibis and herons poking around in the mud flats. There is both a 1/4-mile loop and a 3/4-mile loop possible at this end of the trail system, with a short spur trail that ends amid the ancient oaks of Weedon Hammock.

For birders, the boardwalks that lead to observation points are a must. At the Cultural and Natural History Center, look for the sign that says Paul Getting Memorial Trail to take a 0.8 mile loop through the mangroves, with a spur trail out to an observation tower looking across Riviera Bay and Old Tampa Bay to the skyline of St. Petersburg.

On the other side of the entrance road from where this loop meets the paved Upland Trail, a 3/4-mile loop called the Riviera Trail leads out to views along the bay.

In the opposite direction behind the center, the Upland Trail leads to the Bay Boardwalk, a loop with an observation deck on a pond as well as a spur trail out to an observation platform on a cove of Tampa Bay.

It’s at this stop that we saw the most birds gathered when the tide is out. Focusing on just this birding loop, returning to the center along the Upland Trail at the boardwalk’s end, will net you a 1.5-mile hike.

Connecting the Bay Boardwalk and the Boy Scout Trail is the Lookout Point Trail. This is the wildest of the trails, a mile round-trip, tunneling deep into the mangroves with a natural surface along a long, shaded corridor with occasional breaks in the vegetation overlooking mudflats.

Trail’s end is at a picnic bench and a small muddy beach along Tampa Bay. 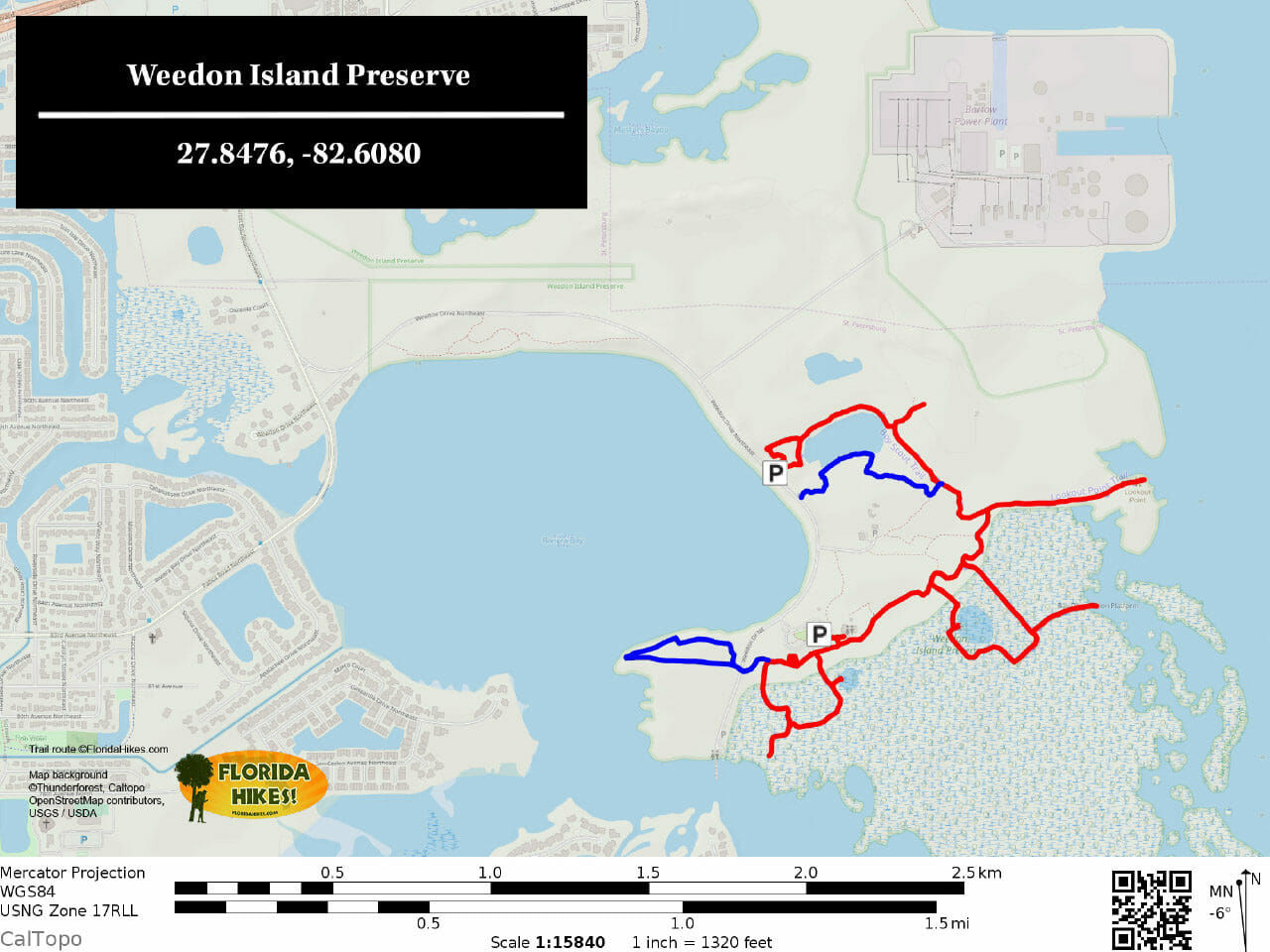