Learn about the trees of the Florida Keys with a walk on the 0.6-mile Hammock Trail, a deeply shaded ramble in a tropical forest at Windley Key Fossil Reef Geological State Park.

The tropical hammocks of the Florida Keys are fascinating places to hike in, as the forests here are both diminutive and thick.

While there is little in the way of understory growth, and lots of surface limestone, the variety of slender trees is particularly showy because of their colorful bark.

Gumbo-limbo, paradise tree, and ironwood are among the many trees found here, as well as the dangerous and toxic poisonwood, which oozes black spots on its trunk.

The Hammock Trail at Windley Key Fossil Reef Geological State Park offers interpretation of habitat and identification of trees to make this a rewarding nature walk.

Tropical forest on the Hammock Trail

Open 8-4, Thu-Mon. No bicycles. Collecting of fossils or plants is prohibited.

Avoid leaving the marked trails as the tropical forest has a lot of poisonwood, one of the more common toxic trees in Florida.

Expect mosquitoes: make sure you use insect repellent. You may encounter great golden digger wasps along the park trails at certain times of year, as we did. According to a bulletin posted, “Great golden digger wasps are not aggressive and will not sting unless provoked.” We suggest wearing closed-toe shoes while hiking here and not walking through any wasp swarms. 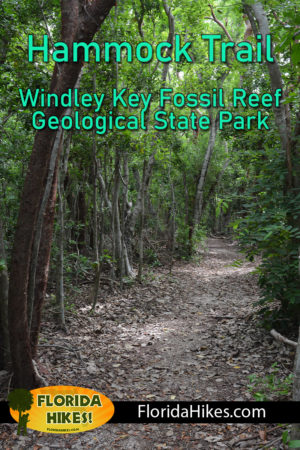 All trails begin on the rock ledge behind the Alison Fahrer Education Center. Stop in there before you start your hike to pick up a trail guide, and follow the brick path past the building.

The trail system starts just beyond the overlook across Windley Quarry. Keep left at the first fork, where the Flagler Trail diverges to the right.

Keep right at the next junction where the Windley Trail diverges. Soon after is a sign for a poisonwood tree, an important tree to remember as it is found throughout the Florida Keys.

Do not touch these trees. They have distinctive yellow-tipped leaves and oozing black spots on its bark that look like motor oil. Their sap and fruit are toxic.

A variety of tropical trees along the trail

However, the endangered white-crowned pigeon feeds on its fruit. Watch carefully and you will notice these pigeons throughout the forest.

The trail swings close to the mangrove forest that fringes this island. Be cautious of swarms of golden digger wasps. Park signs say they do not attack unless provoked.

The Hammock Trail is not a flat hike

The trail tunnels through a small hammock of rare thatch palms. After another curve along the mangroves, keep alert for some plants and shrubs marked with pink flagging.

The cacti growing amid the rocks are only found in the Florida Keys.

Among the thatch palms

One of the more fascinating geologic features thus far on the hike is the Russell Quarry, which unlike the others in the park is completely filled and ringed by the tropical hammock.

The remains of an old homestead are here as well. The trail makes its way around a dropoff into a quarry pit, passing a bench. 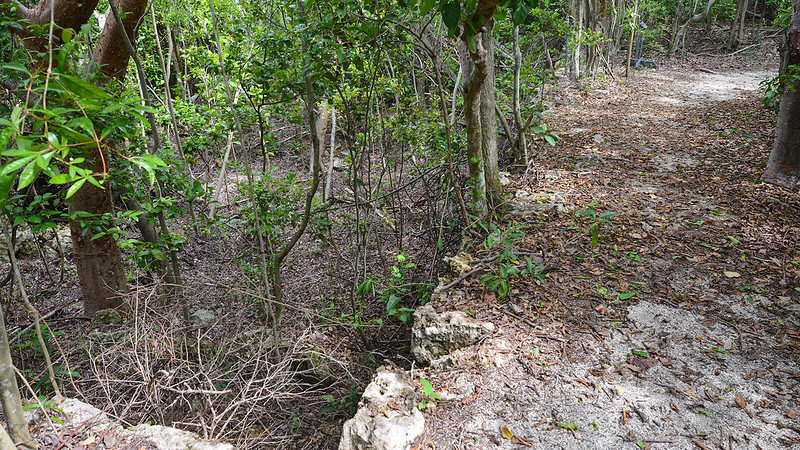 Walking along the edge of the quarry walls

After you climb up a ramp out of the old quarry, the Hammock Trail meets the Flagler Trail at a T intersection.

You can loop back to the trailhead in either direction, but if you haven’t been to the Flagler Quarry yet, it’s a must-see. Turn left.

Quarry wall in the Flagler Quarry

The trail soon descends into the quarry. Either follow the marked Flagler Quarry Trail along the quarry wall to your right, or continue straight ahead through the grassy open picnic area in the quarry’s center.

Passing a sign for the Quarry Station Trail, ascend up the limestone ramp to return to the visitor center. 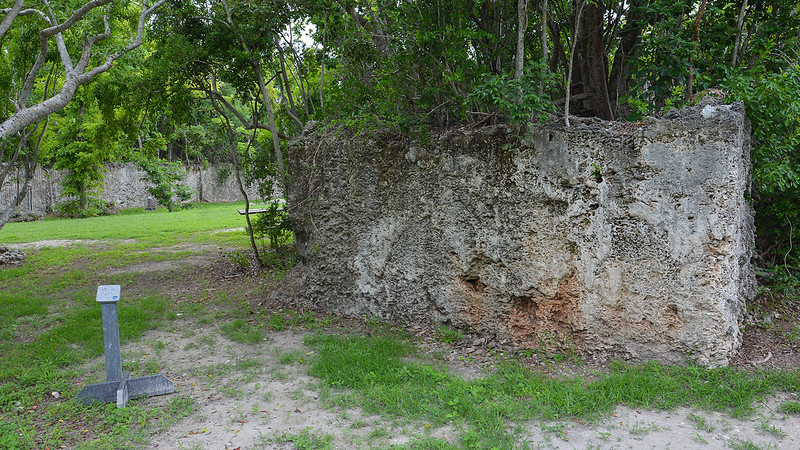 Open area in the Flagler Quarry

See coral fossils up close in a tropical forest at Windley Key Fossil Reef Geological State Park to learn the natural history of how the Florida Keys were formed.

Winding through an ecotone where tropical forest meets mangroves, the Windley Trail is a quarter mile loop that ends up amid interpretation of quarrying history.

A short interpretive trail at Windley Key Fossil Reef Geological State Park, the Flagler Quarry Trail leads you around the showiest of the quarries and the ruins of the railroad depot.

On a wild sliver of Upper Matecumbe Key, footpaths wind through a rockland tropical hammock where a rocky crevice emits sulfur fumes and you must beware of crocodiles near the mangroves

Adjoining Founders Park on Plantation Key, Plantation Hammocks Preserve showcases some of the Florida Keys most interesting flowers under a generous canopy of well-established tropical trees.