The only true stork native to North America, the wood stork can have a wingspan of over five feet. Once highly threatened due to habitat loss in its nesting areas, it’s made a spectacular comeback

Once an endangered species due to habitat loss in its nesting areas, the wood stork has adapted to change, moving its breeding grounds farther north.

You might remember being told as a kid that storks delivered babies. If that were true in America, it would have had to been a wood stork making those drop-offs! It’s the only stork that lives here.

Wood storks have a very limited range in the United States as well. Florida is the best place to see them.

They range west along the Gulf Coast to the Mississippi River and north along the Atlantic Coast into the Cape Fear floodplain around Wilmington, North Carolina.

Every time we see a wood stork, the word “ironhead” pops to mind. That’s what these gawky-looking cranes were called when we were kids.

When you look at a wood stork, it’s that massive dark bill you see first. They are mostly white, except for the bill and their black tail.

When they fly overhead, their silhouette is very distinct. They always fly with their neck and legs extended, making them appear much larger in the sky than they do on the ground.

Young storks have yellow bills which do not turn black until they are several years old. They also have some tufty feathers atop their heads.

The wood stork was among the birds that William Bartram noted during his travels in Florida in 1774, along the St. Johns River in the vicinity of Astor.

John James Audubon referenced Bartram when he drew his first sketch of the “Wood Ibis,” which he says he had found in Florida and along the Gulf Coast to Mississippi.

He observed that the “wood ibis” would linger around alligators and even eat baby alligators, but the alligators would not harm them, going after ducks and herons instead.

In the United States, the wood stork’s historical range followed the Gulf Coast to Texas. Breeding colonies stretched up the Atlantic Coast to South Carolina.

Breeding colonies of wood storks are found through coastal Mexico, Central America, and much of South America. They can also be seen in parts of the Caribbean.

Wood storks prefer wetlands. You will find them in both shallow freshwater wetlands in Florida and in estuaries along the coasts.

Like many of Florida’s wading birds, wood storks are colonial nesting birds. That means they like to build nests close to each other.

They prefer to choose sites where there is a swamp below, or on an island in a swamp. Perhaps you’ve noticed the fabulous bird rookeries in Florida alligator farms and zoos?

Having alligators cruising below to pick off predators increases the chances that the baby birds survive.

It takes wood storks a month to incubate up to 5 eggs. The parents spend four more months raising their young.

Why are Wood Storks Threatened?

By February 28, 1984, the U.S. Fish and Wildlife Service listed the breeding population of wood storks in United States as endangered.

As more and more of Florida was being developed after World War II, swamps were literally drained all over the state. Wood storks need those swamps for survival.

Wood storks will generally not build nests unless they can build them above a swamp.

Wood storks come back to the same nesting areas year after year. This is why it is crucial to protect places where there are known to nest.

What is the Long Term Outlook for Wood Storks?

In 2014 – thirty years after being placed on the Endangered Species List – the status of the wood stork breeding population was downgraded to “threatened.”

That means that the population of wood storks is increasing. But there are still struggles – particularly in Big Cypress and the Everglades – with water levels being high enough in the swamps to protect the wood stork nests.

If water levels aren’t high enough, the wood storks won’t nest – not even at their long-time nesting grounds in Corkscrew Swamp.

Development in this region of Florida – especially development that involves drainage of swamps and adding of fill to the Big Cypress ecosystem – continues to be a concern for the long-term health of wood storks as a species.

Other threats include the effects of pesticides and toxic algae blooms in Florida waters, and one that none of us could have seen coming: Burmese pythons. In the Everglades, they treat wood storks as prey. 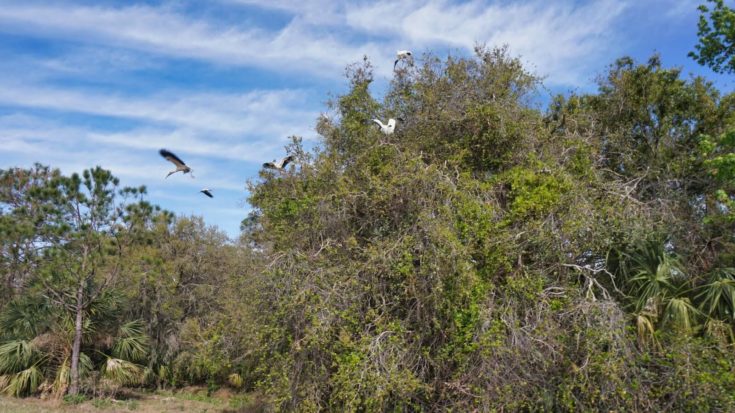 Imagine our surprise to see wood storks actively picking up sticks and taking to the oaks to build nests at this popular wetlands park, but that's exactly what they do. Look for them in and around the trees northwest of Lake Searcy. 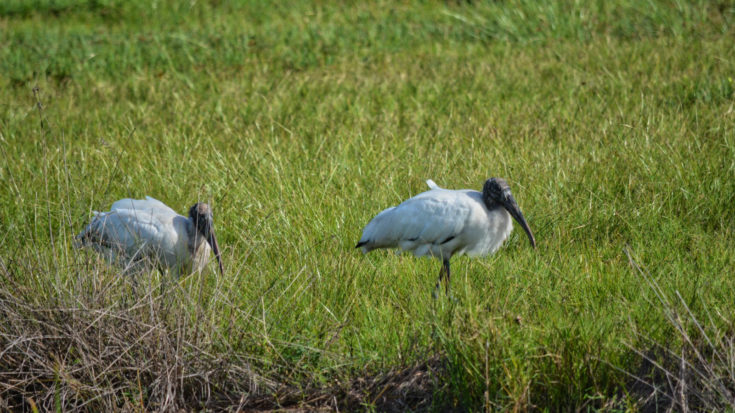 Along the loop trail in this Okeechobee-area preserve, expect to see not just wood storks but every sort of wading bird as they compete for fish in the wetland pools that filter agricultural runoff out of Taylor Creek before it reaches Lake Okeechobee. 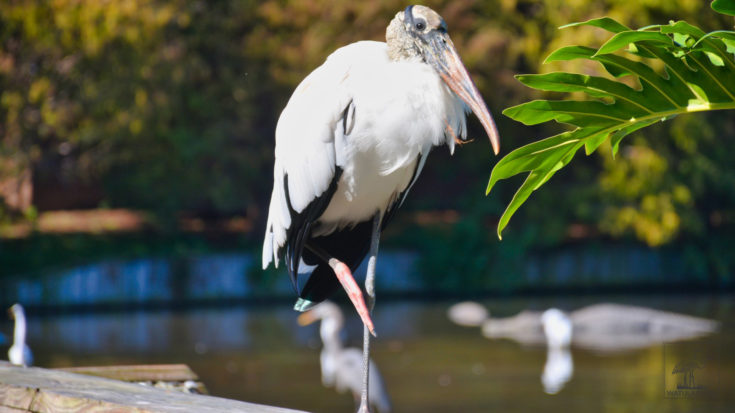 With quick access to food scraps, the wood storks here are rather bold, so you can get good photos. But the Alligator Breeding Marsh protects a prime nesting area for colonial nesting birds, so wood storks are a mainstay at this natural attraction. 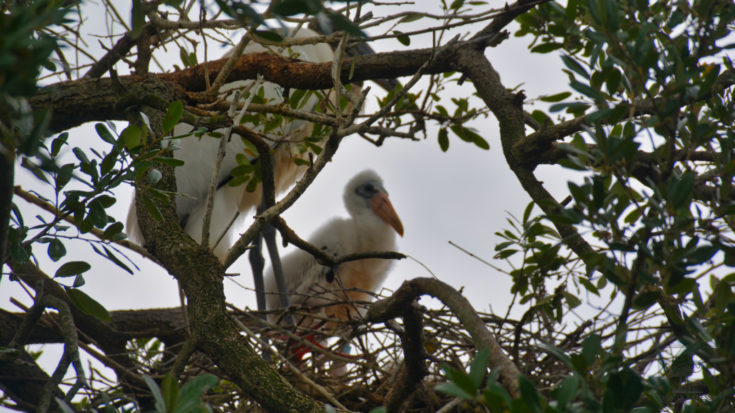 When we looked up into the trees above the Plains of East Africa boardwalk, the last thing we expected to see were baby wood storks fussing on their nests. The African creatures below them must scare predators away. 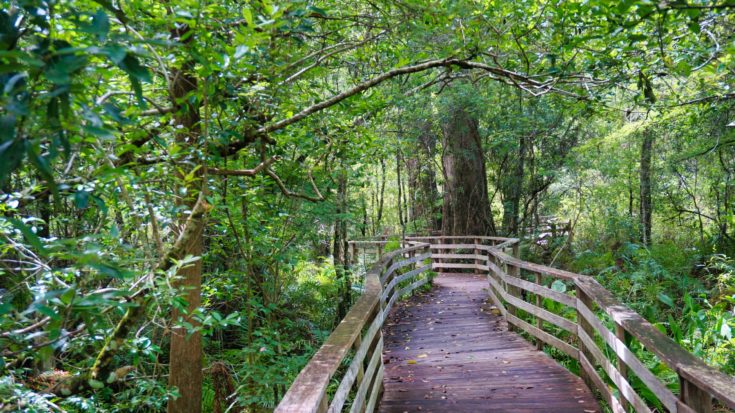 Known for its well-established breeding colony, Corkscrew Swamp Sanctuary is an Audubon preserve where an old-growth cypress strand is preserved for the sake of these nesting birds. 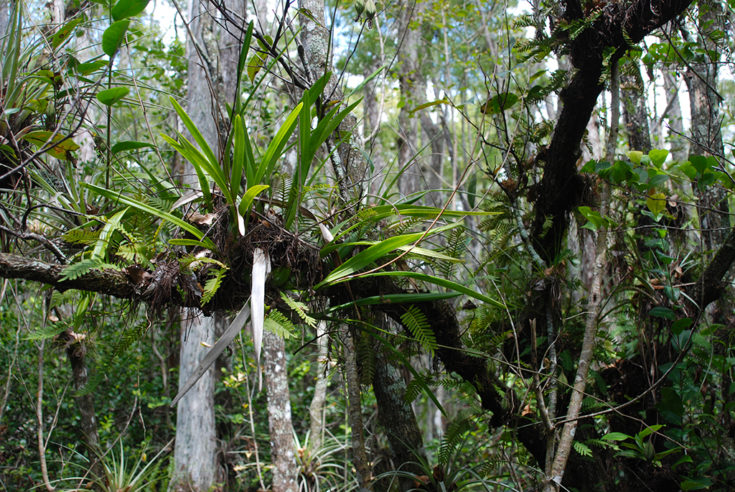 A spectacular birding destination during the winter months, Big Cypress National Preserve is a watery wilderness best described as the Western Everglades. Visit the Oasis Visitor Center to see dozens of wood storks along the canal.

A slideshow of images of wood storks from the places we’ve seen them around Florida.