Most of them are wet. Most of them are for the birds. The refuge has its roots in a concerted effort to preserve a major winter migratory bird destination by the National Audubon Society.

Location: Titusville
Visitor Center: 28.641204, -80.735856
Fees: Access to most of the trails, coves, and birding sites is free. There is a charge at the boat ramps and for Black Point Wildlife Drive, $10 per vehicle or $2 per bicycle. A National Parks Pass, Duck Stamp, or Federal Public Lands Pass covers your parking fee.
Restroom: Provided at fee areas
Land manager: U.S. Fish & Wildlife Service
Phone: 321-861-0669

Except for the visitor center complex which is closed on Sundays, most areas are open daily. Boat ramps are open 24 hours. Trails and Wildlife Drive are open dawn to dusk. 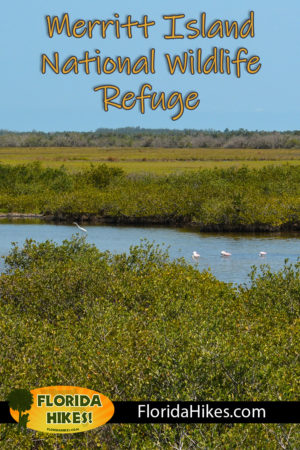 Camping is not permitted except by special permit for groups using established camping areas.

Leashed dogs permitted except where posted. This is not an optimal place to bring a dog because of the abundance of alligators and other wildlife.

Although Kennedy Space Center is surrounded by the refuge, recreational activities occur on the north end of the refuge, north of the launch pads and landing strips.

Access the refuge via CR 406 (Garden Street) east from downtown Titusville, crossing the Max Brewer Bridge over the Indian River Lagoon to the causeway.

Visitor information station at the entrance along SR 406

The refuge begins at the end of the causeway, with a pulloff and welcome kiosk on the right where you can pick up maps.

A short trail leads to an observation deck looking over the lagoon towards the immense Vehicle Assembly Building at Kennedy Space Center, called the world’s-largest one story building.

Past this entry point, at the split in the road, keep right to visit the Merritt Island National Wildlife Refuge Visitor Center, or go left to visit Black Point Wildlife Drive.

Shoreline accessible for fishing from a back road near the causeway

More than 310 different species of birds have been recorded on the refuge, including Florida scrub-jays, bald eagles, black-necked stilts, and roseate spoonbills.

Black Point Wildlife Drive is by far the top destination where birders will find life list species during the winter months.

White ibis in a pine tree

Most hiking trails on the refuge are short nature trails, ideal for family exploration. Only the Visitor Center Boardwalk is fully accessible, but several of the trails have improved surfaces.

The only fully-accessible trail at Merritt Island National Wildlife Refuge, the Visitor Center Boardwalk offers many overlooks for wildlife watching and birding

Delving deep into the hammocks of North Merritt Island, the Palm Hammock Trail treats you to a lush forest of mature saw palmettos under a dense canopy of live oaks on the way to an island of cabbage palms

Observation deck at the Visitor Center

The Brevard Coast to Coast Trail starts at the edge of the refuge on the causeway over the Indian River Lagoon. It will eventually be extended through the refuge to Playalinda Beach.

It is the eastern anchor of the state-spanning Coast to Coast Trail, 250 miles to St. Petersburg.

There is no bike lane on refuge roads and cars do travel at high speed. Download a copy of the Refuge map, below, to see the road system.

A bike ride through the northern part of Merritt Island National Wildlife Refuge from Titusville to the Haulover Canal and back.

There are many places to launch a kayak or canoe at the refuge. Open shallow waters in the north Indian River Lagoon north of Haulover Canal attract kayak anglers for redfish.

The biggest deal here is bioluminscent kayaking, at its best during the hot summer months. The shallows literally glow beneath your boat.

When conditions are just right – usually in the summer months – the tips of the waves glow, and every stroke of your paddle lights up with shimmering shades of blue.

Even the drops of water falling from it glow. As fish dart past, you can see them leave illuminated streaks in their wake. Still waters and dark skies are best.

During the summer months, bioluminescence makes its appearance in the Indian River Lagoon and is especially strong along Merritt Island near Titusville. On my paddling trip, I saw the best glow I’ve ever seen.

Taking on a remote stretch of the Indian River Lagoon paralleling the wildest part of Canaveral National Seashore, our group of paddlers turns back until only two kayakers are left, fighting the wind to reach our goal.

Paddlers can enjoy the refuge in daylight as well. The Florida Saltwater Circumnavigational Trail tacks its way across the lagoon from Parrish Park in Titusville to the Haulover Canal.

The best protected shallow water paddling is north of Haulover Canal. If you put in at Bairs Cove, be aware of tides, which make for strong currents through this narrow waterway.

You are most likely to see manatees at Bairs Cove and in the Haulover Canal at any time of year, especially when paddling.

Both the Beacon 42 Boat Ramp and the WSEG Boat Ramp are ideal launches for paddlers. WSEG is always less busy, as it’s a dirt slip between the mangroves into extensive flats.

While Playlinda Beach is part of Canaveral National Seashore, which stretches up the coastline all the way to Ormond Beach, the only way to access it by vehicle is through the refuge.

The beach is one of the more spectacular places to witness a rocket launch. In addition to the oceanfront, Eddy Creek and the Salt Ponds provide birding and wildlife watching.

At the south end of Canaveral National Seashore, Playalinda Beach is a popular destination for beachgoers along the Space Coast thanks to its natural beaches and views of Kennedy Space Center.

Click on any icon to get directions and details on the recreation sites we’ve written about at Merritt Island National Wildlife Refuge, or select from the destinations listed below the map.