Tracing 44 miles of railroad history down forested corridors, past big lakes and city parks, and through quaint communities, the Withlacoochee State Trail is one sweet ride

In the late 1800s, a flurry of railroad construction followed the discovery of phosphate near waterways along Florida’s west coast from Dunnellon south.

When the ACL became part of the Seaboard Coast Line in 1967, certain corridors were abandoned over the next two decades. This was one of them. 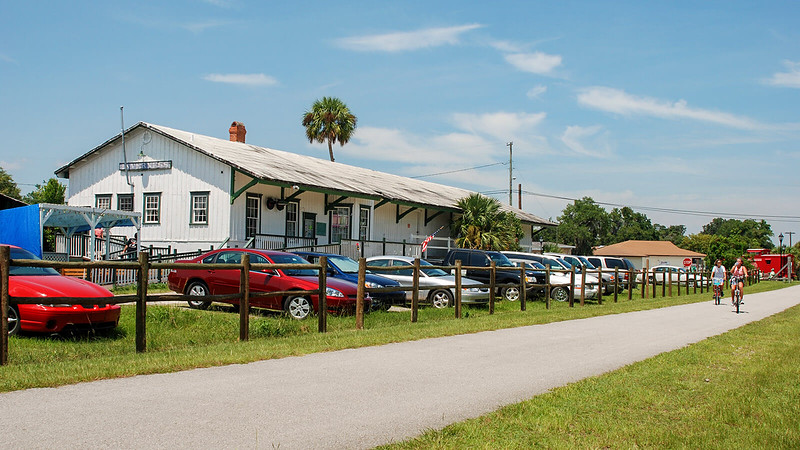 One of Florida’s earliest and longest rails-to-trails projects, the original Atlantic Coast Line segment between Citrus Springs and Dade City was used for this bike path.

It was developed in the 1990s as a recreation and transportation corridor. Before we ever met, we’d each explored it in our own ways. 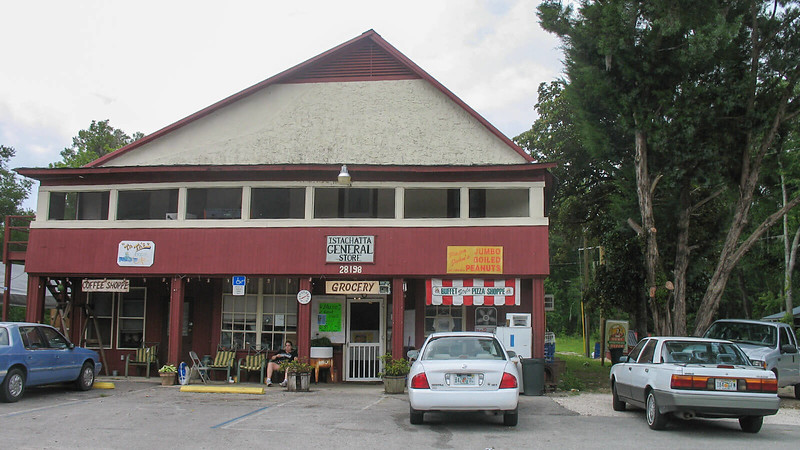 John rode the trail with friends, using Floral City as a pivot point. Sandra walked it from Nobleton to Hernando as part of a Florida Trail section hike.

The uniqueness of this trail lies in its setting as it parallels the northward flow of the Withlacoochee River. 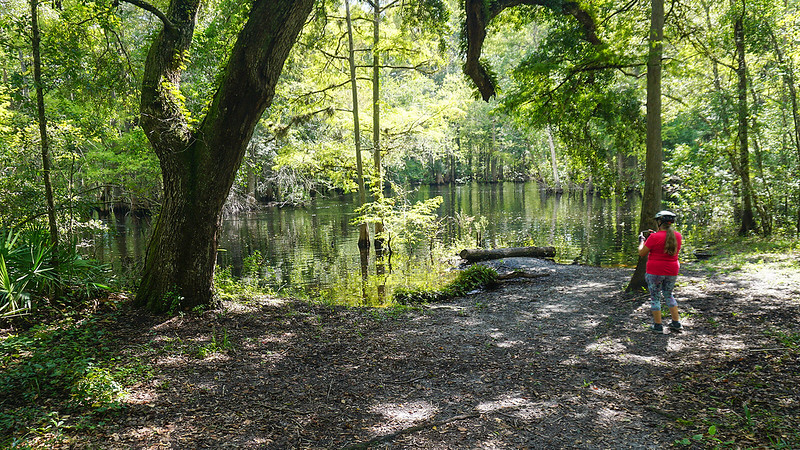 A side path leads to the river south of Nobleton

Easy to access restaurants, campgrounds, and motels enable rides to stop and explore along the way. 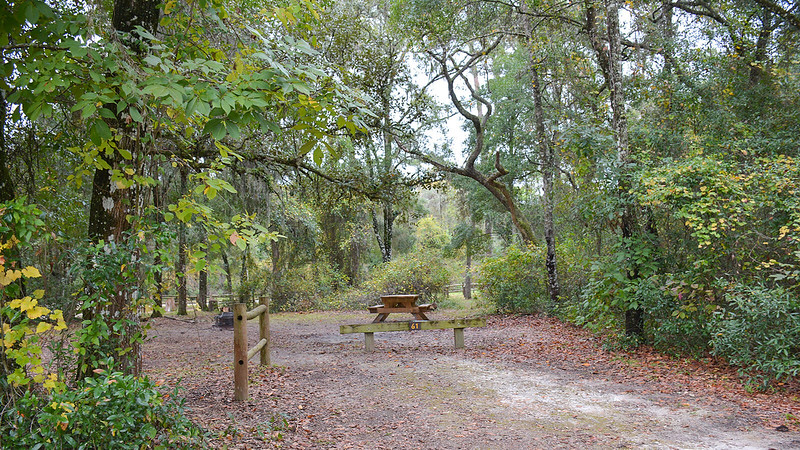 Crooked River Campground is a personal favorite along the trail

Our resources for exploring the area

Open sunrise to sunset. Leashed dogs welcome. Please pick up after your pet.

Benches are provided at regularly spaced intervals along the trail, as well as covered shelters with benches or picnic tables. 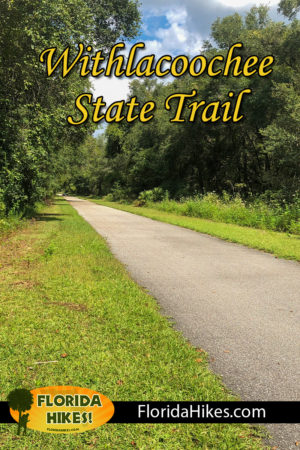 Electric assist bikes are not permitted per Florida State Parks. Equestrians may use the grassy area adjoining the pavement through Withlacoochee State Forest.

While the trail can be ridden in one go by expert riders, we’ve divided it into three pieces that make sense for day trips out and back from major trailheads.

On this 13.7 mile stretch starting north of Dade City, most riders focus on the segment northbound from the Ridge Manor trailhead through Withlacoochee State Forest.

The Florida Trail crosses the bike path, providing connections for hikers for the Croom Loops and the Croom River Trail. 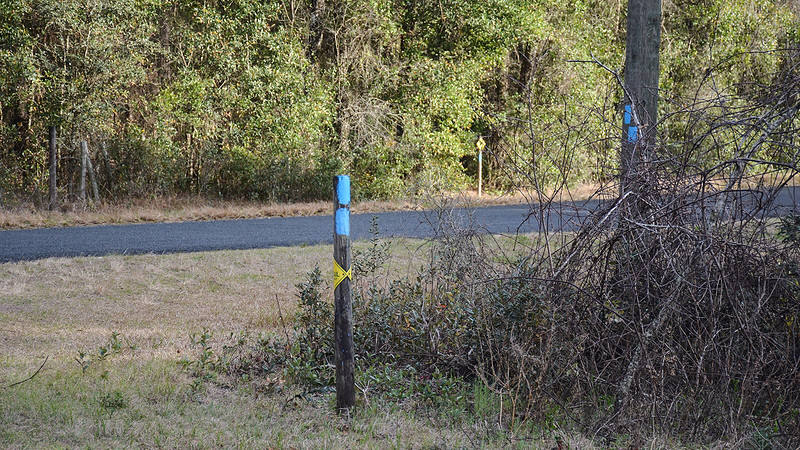 There are also three riverfront campgrounds within the state forest that are an easy ride not far off the trail.

This segment is also where cyclists following the Florida Coast to Coast Trail will turn off to continue west on the Good Neighbor Trail into Inverness. 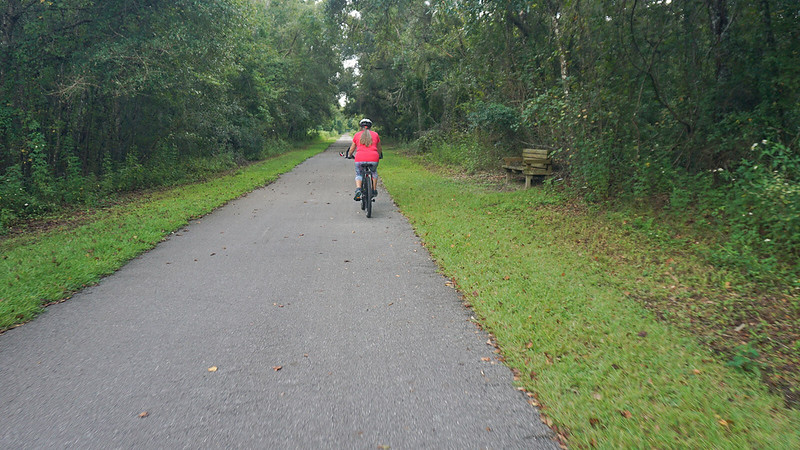 For the 14.3 miles from Nobleton to Inverness, the trail is largely in a shaded corridor first paralleling back roads, and then along US 41.

Passing through the tiny village of Istachatta, it reaches Floral City, historic center of the citrus industry for which Citrus County is named. 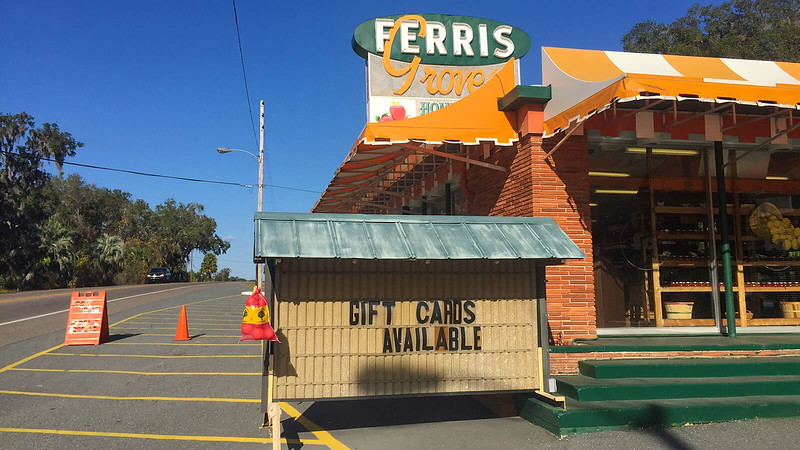 The trail goes behind Ferris Groves, a worthwhile stop for a fresh fruit snack

North of Floral City, a paved side trail connects with facilities in Fort Cooper State Park, where camping can be arranged.

As the trail reaches Inverness, it is again behind residences and businesses. But the protected corridor between the lakes into downtown Inverness is a delight. 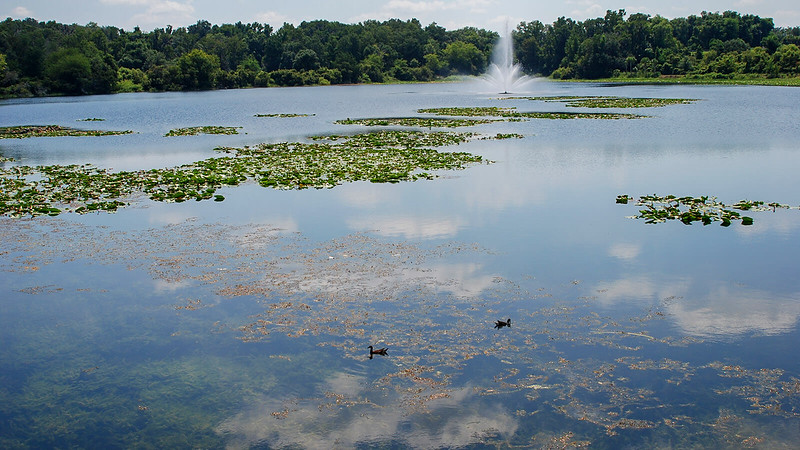 As the trail leaves downtown Inverness, it curves to slip beneath US 41 to end up on its west side for the remainder of the journey, 16.1 miles north.

Right at the US 41 underpass is where the northbound Florida National Scenic Trail joins the bike path all the way up to the Gulf Junction trailhead. 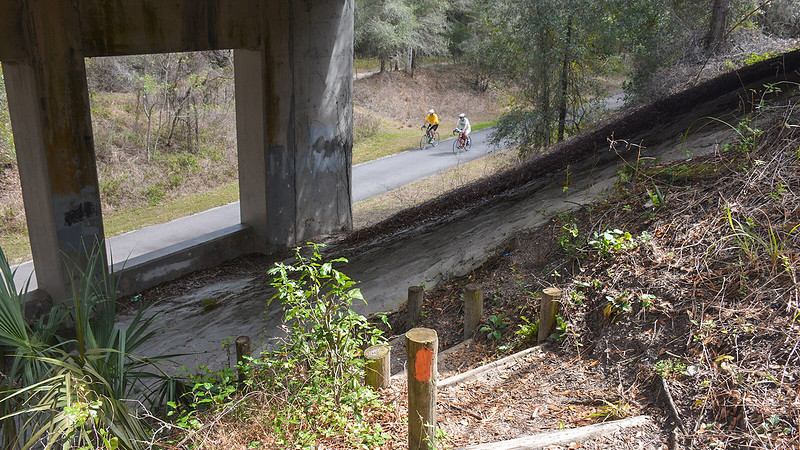 Road crossings are much more frequent along this segment, as is easy access to restaurants, stores, and trailside parks. 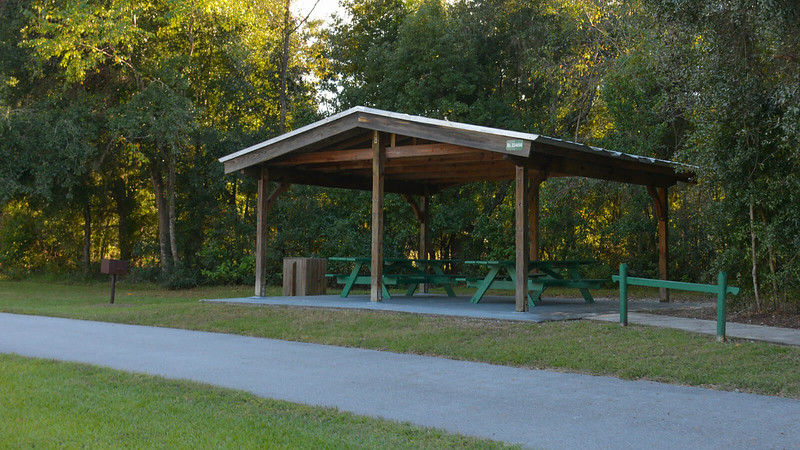 Plans are in place to create a paved bike path connector to the Dunnellon trailhead of the Cross Florida Greenway to join the Dunnellon Trail.

The Florida Trail currently follows orange blazes through a Citrus Springs neighborhood to make that connection. 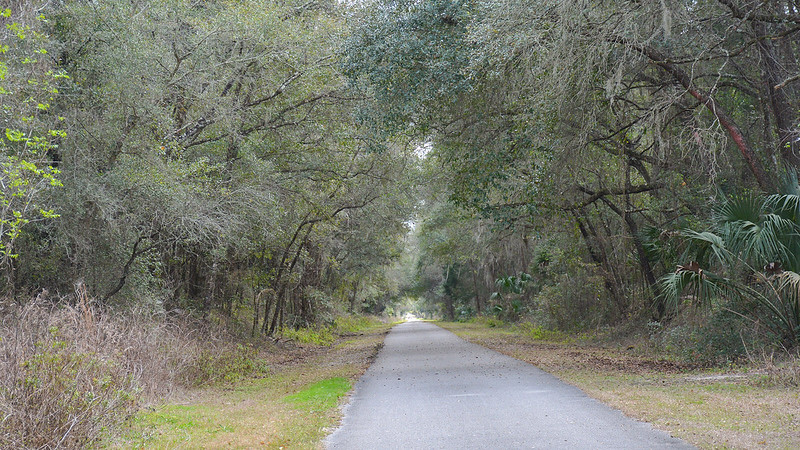 Tunnel of trees north of Inverness


Click on any icon on the map to pull up trail or park details or obtain directions to a trailhead.

When the Western Corridor of the Florida Trail was first established, it made liberal use of the Withlacoochee State Trail to connect Brooksville with Dunnellon.

In recent years, our National Scenic Trail has been rerouted more appropriately as a footpath as originally intended, linking segments of Withlacoochee State Forest. 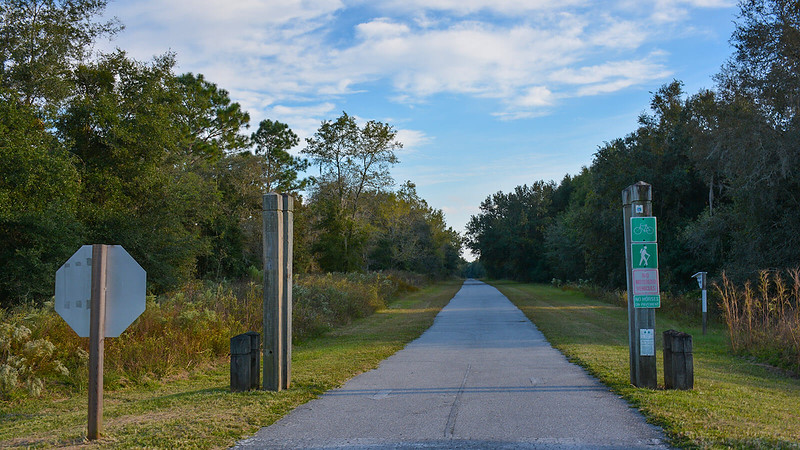 Following the trail north of Hernando

The Florida Trail continues to use the Withlacoochee State Trail between Whispering Pines Park in Inverness and the Citrus Springs terminus.

A 6 mile segment of the Withlacoochee State Trail between Ridge Manor and Croom Junction is used as a connector for cyclists following the Florida Coast to Coast Trail.

Used as a connector for the Florida Coast to Coast Trail, the Good Neighbor Trail is a straight run from the Withlacoochee State Trail west to downtown Brooksville.

An important link in the Florida Coast to Coast Trail, the Good Neighbor Trail stretches 10.1 miles from downtown Brooksville to the Withlacoochee State Trail

Visit these stops along the Withlacoochee State Trail

Using the Florida Trail and the Blue Loop Trail, hikers can explore a picturesque corner of Withlacoochee State Forest in Ridge Manor along a 3.9-mile loop.

A pleasant ramble on bluffs above the Withlacoochee River, the Croom River Trail segment of the Florida Trail tunnels through oak hammocks and slips around cypress swamps along its 6.3-mile journey.

24.9 miles. With three stacked loops of blazed footpaths in Withlacoochee State Forest, the Croom Hiking Trail is one of the oldest and driest loop hike destinations for backpackers on the Florida Trail.

Offering access to the Withlacoochee River and the Withlacoochee State Trail while protecting a swath of environmentally sensitive lands west of Nobleton, Lake Townsen Preserve is the gateway to miles of trails.

In downtown Inverness, Cooter Pond Park is a great place for birding and watching the turtles beneath the extensive boardwalk over the pond.

Biking, paddling, and even a bit of hiking were in the plans as we explored Florida’s Adventure Coast – Hernando County – for activities we could enjoy during warm weather.