The smallest of Florida’s national forests, the Osceola National Forest carries the weight of history hidden in its dense stands of longleaf pine.

Part of a much larger mosaic of public lands stretching to the Suwannee River basin and the Okefenokee Swamp, Osceola National Forest is Florida’s youngest National Forest.

A portion of it protects the Pinhook Swamp, an ecologically diverse landscape of pine flatwoods and pocosins where carnivorous plants thrive. 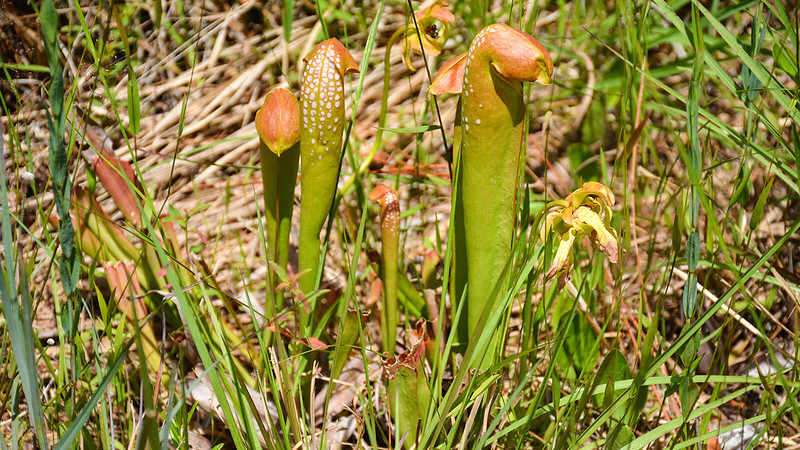 The forest is open 24 hours except as posted at day use areas, which are open sunrise to sunset. Leashed dogs permitted except at beaches on Ocean Pond. 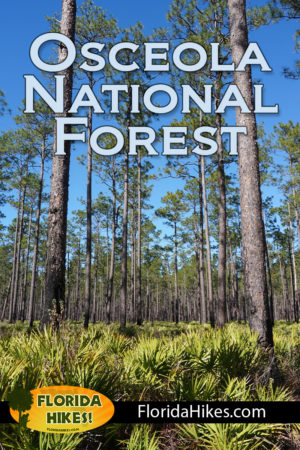 
From Lake City, follow US 90 east. From Jacksonville, follow Interstate 10 west to Sanderson, then US 90 west to Olustee. Click on any of the icons above for specific directions to trailheads and other destinations we describe in Osceola National Forest.

When the land for Osceola National Forest was acquired, much of it had been actively worked for timber production and turpentine camps.

In recent decades, large swaths of the forest have undergone restoration to bring back the original longleaf pine and wiregrass habitat that once blanketed the Southeast. 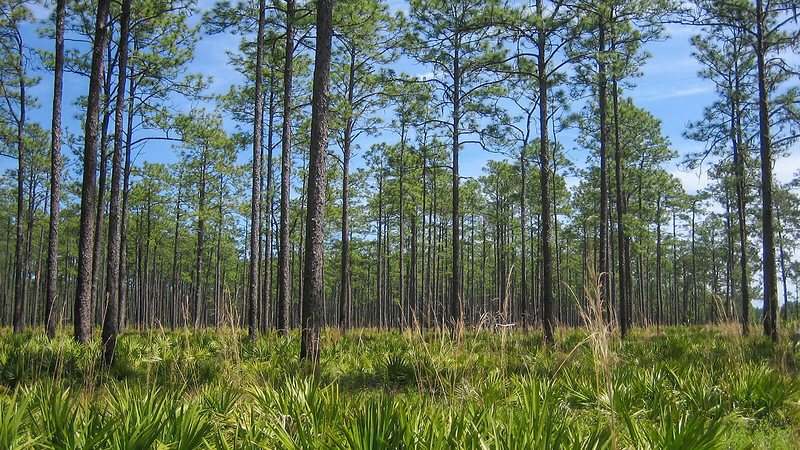 South of US 90, more than 3,000 acres of the forest was designated the Olustee Experimental Forest in 1931.

On this part of the forest, scientists worked on breeding the best of Southern pine species to improve disease resistance and increase timber production. 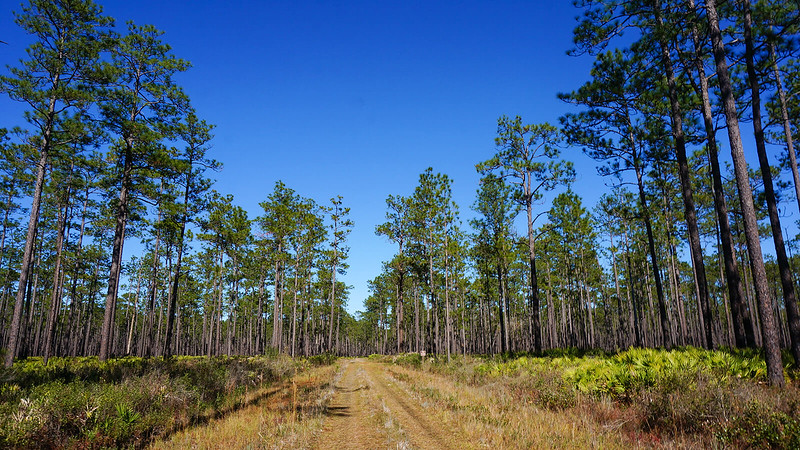 Among the pines in Olustee Experimental Forest

The forest is home to many endangered and threatened species, including Florida black bear, indigo snakes, gopher tortoises, and fox squirrels.

Birders will appreciate the many places where it’s easy to see red-cockaded woodpeckers in their nesting colonies in old-growth longleaf. 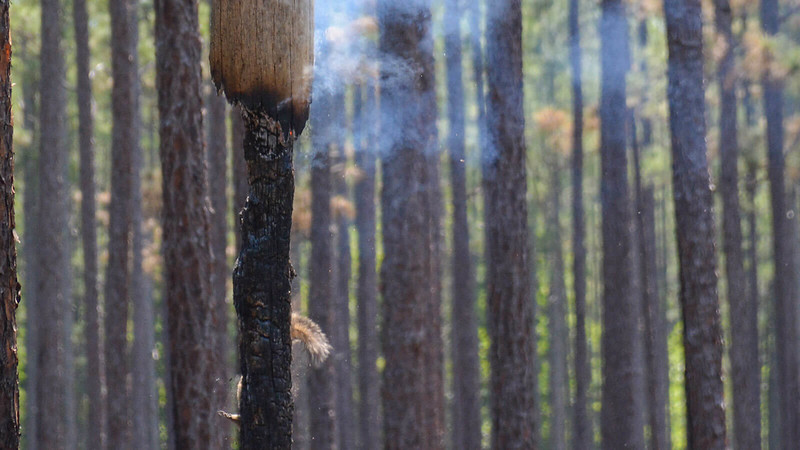 Olustee Battlefield, which is Florida’s oldest piece of public land, preserved by the state legislature as a war memorial, is a state park entirely surrounded by the National Forest.

In these pine flatwoods, Union and Confederate forces met at the Battle of Olustee, Florida’s largest and bloodiest battle of the Civil War. 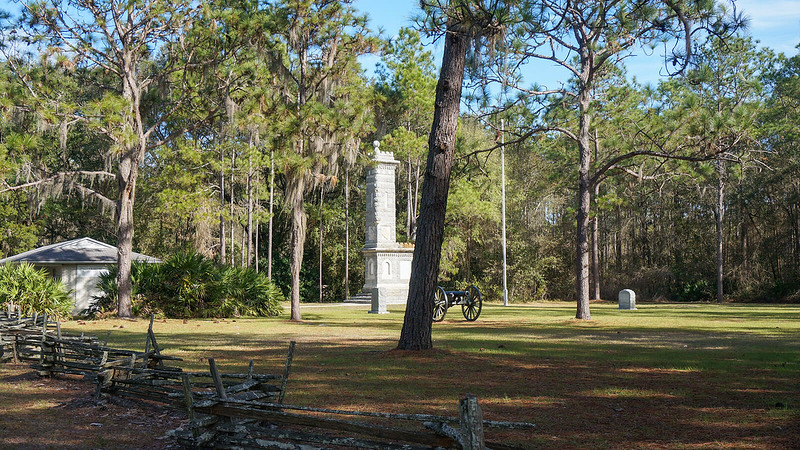 One of the earliest pieces of the Florida Trail was built in the late 1960s across Osceola National Forest. It boasts one of the trail’s few camping shelters.

This 20 mile segment of trail is known for immersing hikers in the beauty of the longleaf pine forest, but that’s not all you’ll see along it.

Cypress swamps — which, when the cypress needles fall off in winter, can glisten in a rainbow of colors to create a “rainbow swamp — are also part of the landscape.

It’s rare that you won’t end up with wet shoes when hiking across Osceola National Forest on the Florida Trail. These are some of the hikes you can do on the FT.

An easy linear hike or round trip with a stop at the Florida Trail’s oldest shelter, this short segment of the Florida Trail in Osceola National Forest is part of the Great Florida Birding Trail.

In the northwest corner of Osceola National Forest, this 11.4 mile segment of the Florida Trail offers strong contrasts between pine flatwoods and bogs.

In addition, Osceola National Forest has a handful of shorter nature trails that provide interpretation of the habitats as well as great spots for birding.

One of the longer loops in the forest traverses the Big Gum Swamp Wilderness, a rugged and wild area that is a Congressionally designated federal wilderness area.

The campground here is along the cypress-lined lake, with pleasant, breezy sites and a swimming beach. 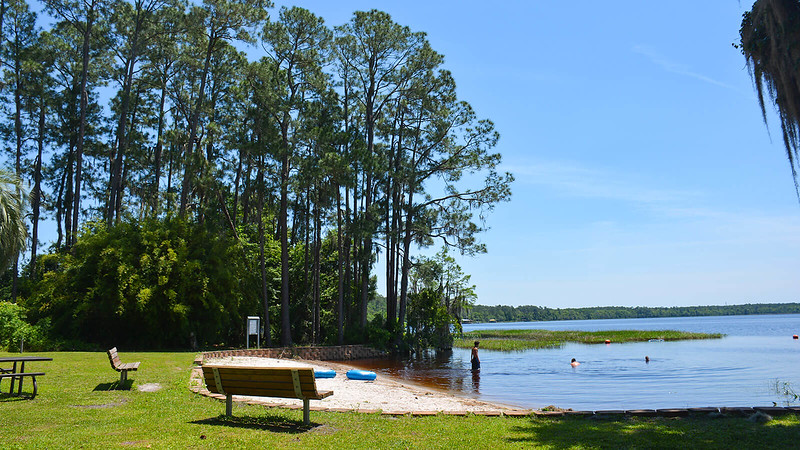 Ocean Pond is the only full campground, with a bathhouse and sites that can accommodate RVs and campers.

Tent camping is permitted at the other camping areas, which are called hunt camps. Of these, West Tower is the largest and has portable toilets near its landmark tower. 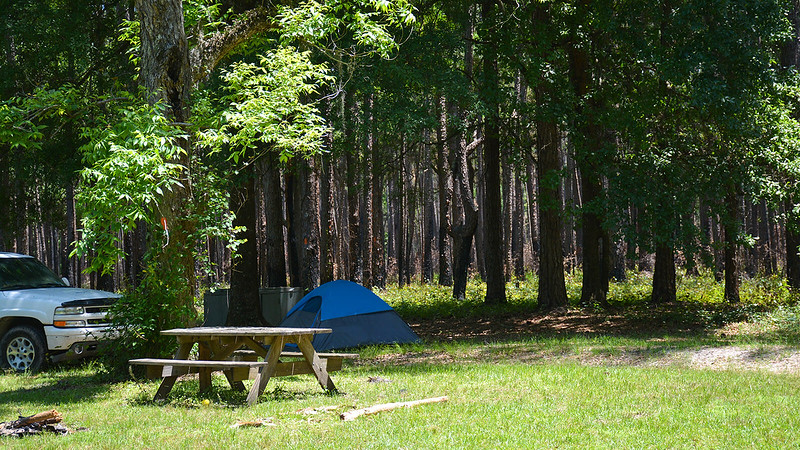 In all, there are six designated camping areas plus Ocean Pond Campground. Random camping is otherwise permitted in the forest except during general gun (deer) hunting season.

There is also the Landing Group Camp along Ocean Pond, which is available for families and groups to camp together and must be reserved in advance. 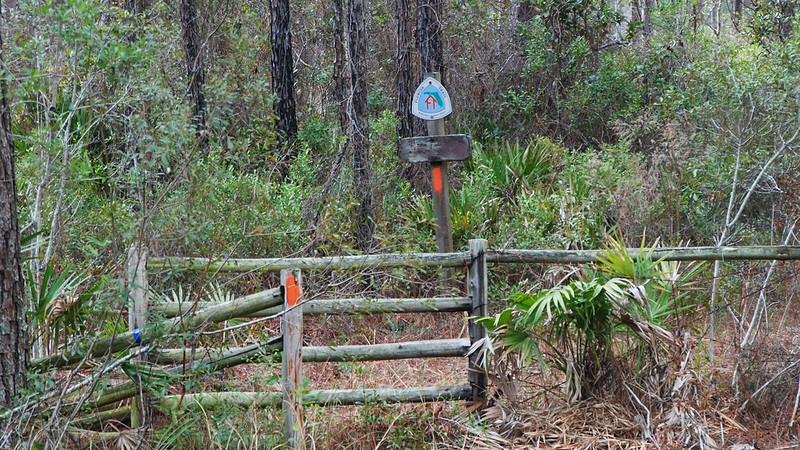 Anglers have access to Ocean Pond via Olustee Beach, where there is a boat ramp. Another ramp is at the group camp.

On the western edge of the forest in Lake City, Watertown Lake has both a boat ramp and pier. 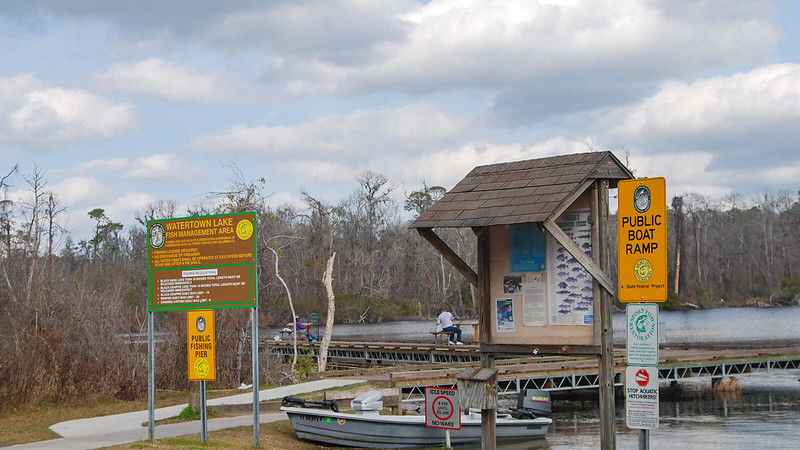 Ramp and pier at Watertown Lake

During hiking seasons in Florida, you are often sharing the trails with hunters. General gun season – deer hunting – is the main hunting season for hikers to be concerned about.

Bear bagging is the art of hanging your food properly out of reach of bears. If you’re a Florida backpacker and haven’t learned how, here’s a short course. Securing your food from bears is required in the Ocala, Osceola, and Apalachicola National Forests.

A follow-up to the conservation legacy of Teddy Roosevelt’s administration, The Weeks Act was signed by William Howard Taft in March 1911. It authorized the Federal government – for the first time – to purchase private land to protect watersheds throughout the eastern United States.

More than ten thousand soldiers met and fought in the longleaf pine forest at Olustee, the largest Civil War battle on Florida soil

At Stephen Foster Folk Culture Center State Park, Florida pioneer crafts and Florida folk music are as important as the lovely setting on the Suwannee River