At Scottsmoor Flatwoods Sanctuary, the trails are open to hikers, cyclists, and equestrians. But as we learned, off-road biking here can be more than a little challenging.

It was a perfect day to be outdoors. The sun was shining, the sky was blue, and the temperature was in the low seventies. But it was Sunday.

Parks and trails tend to be busy on Sundays in our area, so we decided to head somewhere that we knew wouldn’t be: Scottmoor Flatwoods. 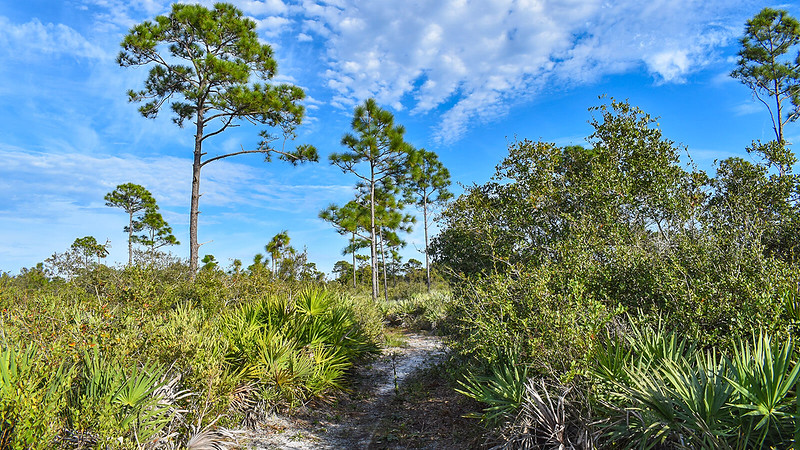 Unless you live near it or do a lot of digging around online for natural areas, you probably wouldn’t know how to find it. Which is why we were there.

There isn’t a sign to the trailhead, and even when you park your car, you can’t see either of the trailhead kiosks at Parrish Park in Scottsmoor.

We’d been here earlier in the year to hike the northern portion of the preserve, but wanted to finish the rest of the trails so we could write about it.

Sandy decided to make up a loop on trails through the south end of the preserve, while I rode the perimeter trail, which is blazed red. The map on the kiosk says it is 6.1 miles long.

Approaching the south kiosk, what I could see behind it was a very a rough area. Luckily it was nothing more than a wide fire break. I crossed it and started a clockwise loop.

The red perimeter trail headed off into open palmettos and pines.

I came across Sandy as she was about to turn off onto the White Trail to hike counterclockwise to meet me later on.

I hadn’t ridden far past that junction before the trail began to look as rough as the fire break I had seen as I started. Hog damage!

Sometimes I could skirt around it or ride along the edge, but usually the entire trail was uprooted.

A hog wallow in the palmettos

As I was beginning to enjoy the twist and turns through the palmetto and pines I came to another fire break, and another and another.

They each were so rough that I had to walk the bike across them.

Some of the ruts were deep enough to catch and trap my entire front wheel. Just pushing the bike became a challenge.

Just past the second of many firebreaks

Thankfully the trail was well marked with poles topped with a red stripe and was easy to follow.

Once through the dry and hog damaged part of the trail, I entered a soft and muddy section with occasional standing water. 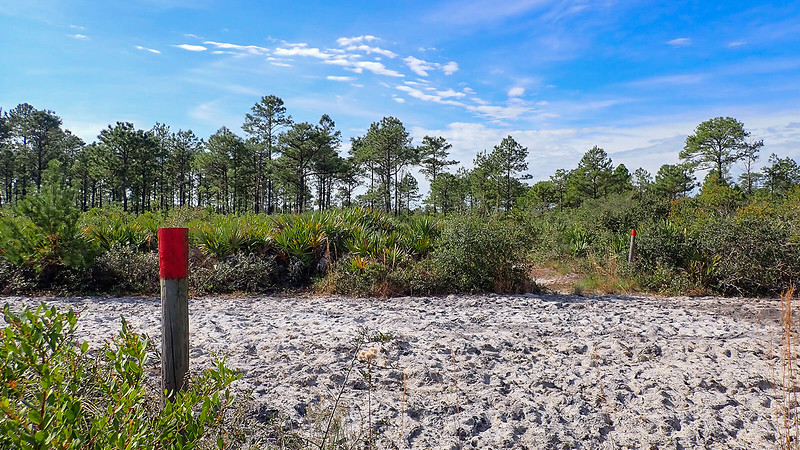 Passing the turn off to the south end of the park I came to a grassy road without a noticeable trail mark. The road led straight into a standing body of water.

Parking the bike I walked towards the water where I came to a worn path leading to a marker and narrow boardwalk.

Back on the bike, I rode through a short distance of standing water to reach the end of the boardwalk, stopping as soon as I was on it.

I could see ahead about three quarters of the way across that there was a broken board. It looked like a horse put its foot through it.

In the middle of the preserve is a north-south line of marshes, which the boardwalk crosses

Opting for safety I walked the bike across. Noticing that there were water lilies on both side, I was thinking that this place has standing water most of the time.

At the opposite end I hopped on the bike to gain a bit of momentum and rode through the wet and mud at before reaching the dry trail.

Making a stop on the boardwalk

It’s funny you have to get your feet wet to get on and off this boardwalk, but it was still better than wading across the swamp.

I didn’t know what was waiting for me further down the trail. The good news was less hog damage. The bad news? Plenty of wet, soft trail.

I used my smallest gear in front (granny gear) for the most powerful strokes to get through the wet and deep mud.

A soggy wet area that the trail led through

Gearing is tricky when riding through soft mud and water. If my front wheel gets bogged down or stuck in the mud, the back wheel just spins without gaining traction.

That leads to a quick unplanned stop– and if I’m not careful, a mud bath.

Near the northwest corner of the preserve, the trail dumped me onto a dirt/grass road.

At least it wasn’t another terrible fire break, because I had to park the bike and begin scouting for the trail.

Across from where I met the road, I saw was a fence line. Looking in both directions, there weren’t any markers that I could see.

Up until here, the blaze posts had been doing a great job of keeping me on trail.

I walked about a hundred feet in each direction and saw no evidence of the trail. I sent Sandy a quick text for advice, and she sent me a map of my location from her GPS.

Using that, I saw that the Red Trail followed the road until reaching an intersection where the red trail met the yellow equestrian trail.

After passing the end of the fence, I saw where the trail veered off to the right to where the yellow and red trails met up ahead.

Of course, that next marker — and the trail I needed to continue along — were on the opposite side of a large large wet area.

With as much momentum I could gather, I started to pedal my way across it.

It was wet out there

The water got deeper and deeper, and the deep mud finally won. I made an unplanned fast stop, with my foot hitting the mud hard to avoid falling over with the bike.

When my foot hit the mud I felt it sink in. As I tried to pull it out, my foot began pulling out of the shoe. Is this a good place to say I don’t like riding in deep mud? 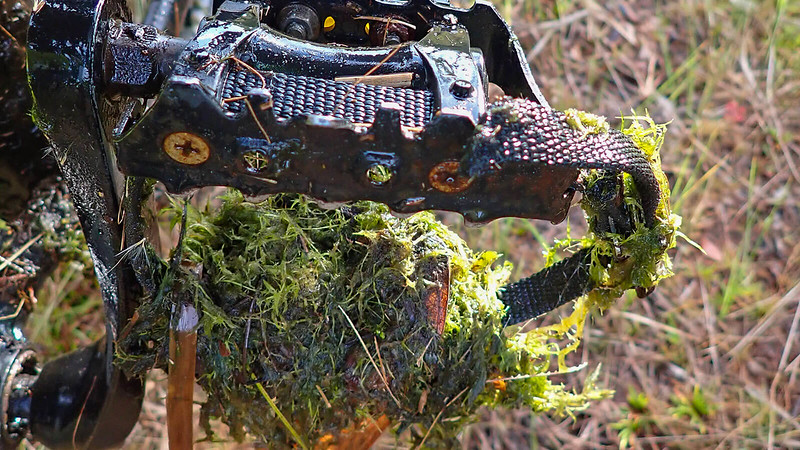 Hitchhikers after the deepest marsh

After wiggling my way free of the mud and a bit of wading while pushing my bike through the mud, I made it to the other side.

As soon as I hit the dry spot, I was met by the next obstacle. The trail was completely blocked by a few small fallen trees. 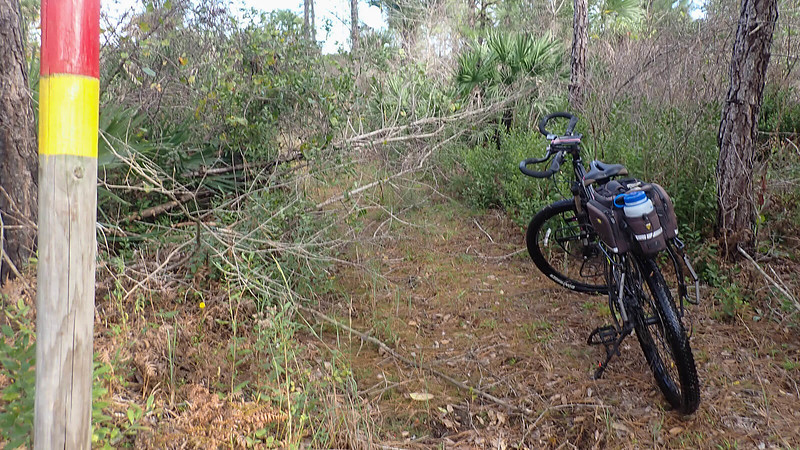 Parking the bike — I did this a lot on this ride — I began breaking off limbs to clear the trail. A little “trail maintenance” to keep going.

The wet and muddy trail continued. I kept saying to myself “Keep your momentum up and DON’T stop pedaling!”

Coming to a stop as swamp water got too deep

It was a good mantra which got me through all but the deepest places. Often I could feel my shoes go under water with every pedal stroke.

Sandy had suggested that I take the Blue Trail back to the parking lot since “it was the shorter route” and I was already running way slower on this loop than either of us expected. 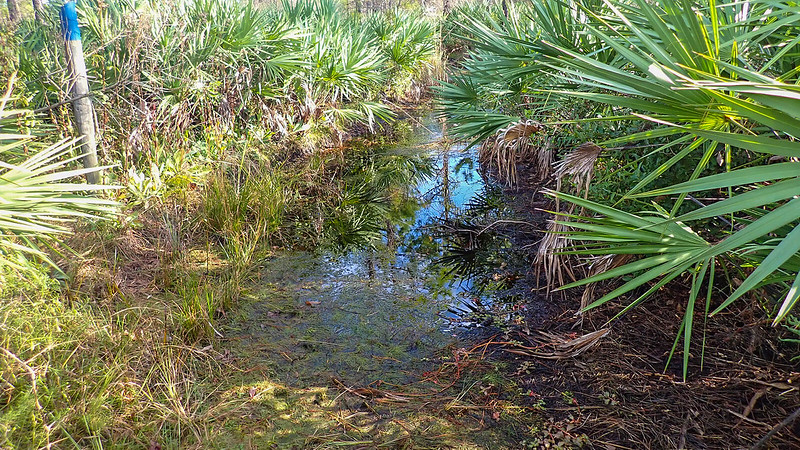 The Blue Trail looked like trouble right off. Last time we’d hiked it, it was bone dry.

However, when I reached the Blue Trail it looked like a black lagoon. I could turn and head directly into the water, or I could take my chances on the shared Red/Blue Trail.

With only a mile to go I decided to try and avoid the standing water by sticking with the perimeter ride. It was the right choice.

Although I hit a few wet and muddy places, there was nothing else I had to wade through. I was very happy to see the ballfield lights and knew that I was almost done. 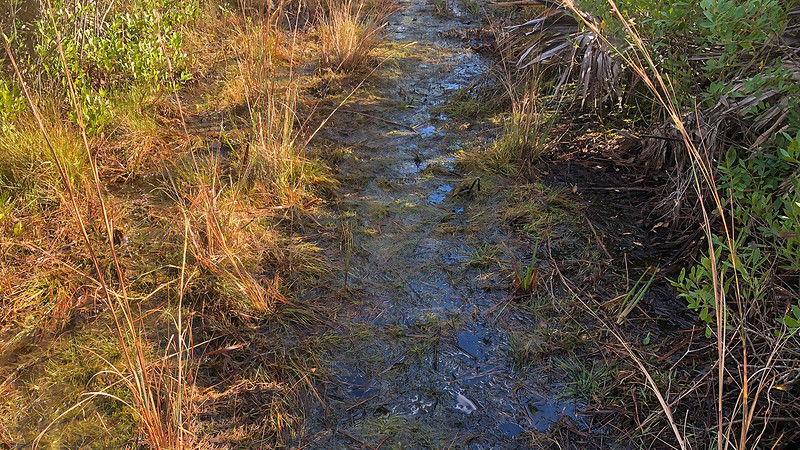 Wet trail at the north end

Back at the car, my bike computer showed 5.7 miles. l had averaged 4.8 MPH while riding, had gotten up to 8 MPH and had been on the trail for 2 hours and 20 minutes. It said I had burned 52 calories.

Now, I’ve ridden in the desert through rocks and cactus and up and down mountains on singletrack path.

As far as I am concerned, riding through thick mud and standing water is by far more difficult. And I am very positive that I burned more than 52 calories!

It was still a fun and pretty trail, but between the hog damage, the standing water, and the very deep mud, I would only recommend the trail to an experienced rider.

Even if you are, be prepared for wading and numerous stops for pushing the bike through rough and muddy terrain.

I needed to hose off the bike after this ride