There is a special magic surrounding a summer hike through Corkscrew Swamp Sanctuary, where ghost orchids dance high above in the soft green canopy created by the ancient cypress protected here

Under blue skies, it’s easier to ignore the intense heat and the heavy blanket of humidity. For a while.

Arriving at the visitor center at Corkscrew Swamp Sanctuary, we were surprised to find it almost empty. 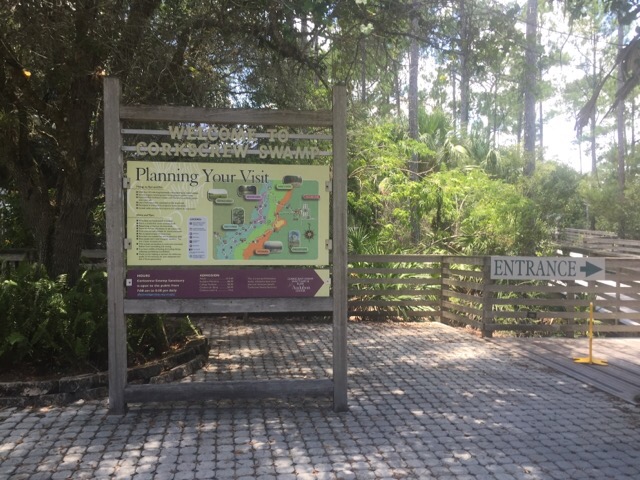 Rich Kuntz, the Audubon volunteer who photographs their ghost orchids for the lovely images sold in the gift shop, was just packing up for the morning with his portable tripod-on-a-cart.

He showed us the morning’s image. “This is with a 2x magnifier and an extender” he said, plus the impressive lens on his Nikon.

“It’s like looking for a quarter from a quarter mile away,” John said. Rich nodded.

But that’s why we were here on this steamy summer day. Neither of us had visited Corkscrew in summer. I’d been here in every other season, and our most recent visit was in January on our honeymoon.

The boardwalks were crowded then. Not today. And this time, mosquito repellent wasn’t optional.

The Big Cypress Swamp – of which Corkscrew Strand is a part – has its own natural mosquito repellent in the summer months. I’d learned that in my years of leading Labor Day Weekend swamp walks at Clyde Butcher’s Gallery.

There is a small fish, gambusia, that eats the larvae. A carnivorous plant, the bladderwort, does its work on them too.

But as we discovered on our walk through Corkscrew, neither can do their duty in this season. The swamp is dry.

The daily rains that nourish the sheet flow of Big Cypress have only just started this past week. So it was the most peculiar thing to see dark, rich earth with alligator flag sticking out of it.

Swamp hibiscus have started to bloom. We saw many more at CREW Bird Rookery Preserve than we did at Corkscrew, but they were there.

We kept peering into the canopy, which is thick this time of year with the fluffy needles of the cypresses, and occasionally spotted a butterfly orchid.

There are countless bromeliads forming hanging gardens overhead, so many varieties I wished I had an expert with me to name them all. And even without water, the swamp lilies put on a show.

But it was the ghost orchid we truly wanted to see. I’d had the pleasure a decade ago of a swamp walk in Fakahatchee that let me make my first acquaintance with these fragile, rare flowers.

John read all the interpretive signs and found one that mentioned a ghost orchid and where you could spot it. I used the biggest lens we own and still had to guess. We repeated that in several spots.

As I expected, wildlife congregated around the Lettuce Lakes, which still had water in their shrunken centers. A large alligator guarded the deepest pool.

As I was filming the pond apple swamp, John whispered. “Look!” Behind us, a barred owl had settled in the branches, almost close enough to touch.

We kept looking for the “mega ghost” orchid, remembering in January there had been a spotting scope pointed at it and cheerful volunteers all along the boardwalk. We found neither today.

Ironically, it was another owl that led to the discovery of the enormous ghost orchid cluster 120 feet up in the canopy. We’re sure many more are up there too.

But today, we had to settle for three maybes until we could carefully look at the photos. We did that last night. Two of the three were duds – a bit of peeling bark or fungi, a ghostly white bromeliad.

The third was the winner. It was the first one John had spotted, and our camera lens had just enough power to prove it was a ghost orchid, as we thought when looking at it from the ground.

We’d planned to walk through the sanctuary anyway, to see and document it in its deep cloak of summer green.

Photographing the ghost orchid made this summer stroll all the more worth the visit.