The original Cedar Key isn’t where you think it is. It’s offshore, within sight of the current historic waterfront, an island called Atsena Otie Key, part of Cedar Keys National Wildlife Refuge.

Settlers came to Atsena Otie Key in 1842 and called it Cedar Key. More than 200 people lived on the island in 1860, establishing a pencil mill and other businesses.

But a ten foot tidal wave washed it all away in hurricane of 1896, and the city began anew one island closer to the mainland.

Kayakers land on the beach, boats tie up at the dock.

Use bug repellent – the island is thick with mosquitoes – and keep alert for snakes. All of the islands off Cedar Key have unusually healthy populations of cottonmouth moccasins.


From US 19 north of Chiefland, take SR 24 west to the end of the road. Continue to the docks downtown. Grab a tour boat from the docks at Cedar Key or paddle out to the island, within sight of the launch.

Disembarking from the boat, walk up the dock – or from a kayak, up the beach – to the big “Atsena Otie Key” sign to start your hike.

Atsena Otie means “cedar island,” and you’ll see plenty of them here – which is why the original settlers came here.

Bricks scattered around a deep hole on the left are all that’s left of the Eberhard Faber Pencil Mill, which washed away in the tidal surge of 1896. A massive cedar now grows above the ruins.

The trail heads down a shady needle-strewn path, flanked by longleaf pines and red bay, saw palmetto and cedars. After it makes a sharp right, it heads through a dense grove of red bay and cedar, arriving at a high spot with a water cistern.

Although the bricks are covered with concrete, a spout sticks out of one side. This is one of the many artifacts dating back to the homesteading of this island.

The first modern habitation here was in 1839, when the U.S. Army established a supply depot and a hospital, calling it Depot Key.

After threats of the island being turned into condos in the 1990s, it was finally permanently protected as part of the Cedar Keys National Wildlife Refuge in 1997.

Walking a little further, you reach the remains of a windmill. As the trail rises up into a grove of wind-swept sand live oaks waving streamers of Spanish moss, you see the bright red blooms of coral beans.

The trail winds past the town’s cemetery, set on a bluff overlooking the salt marshes. The marble tombstones date back to 1882, some fallen, some as clean as the day they were erected.

Paths meander between the gravesites. From the inscriptions and dates on the tombstones, most of those buried here lived brief, harsh lives.

Keep to the left of the cemetery to follow the trail downhill to the salt marsh. A bench provides a sweeping view of the marshes that separate the two halves of Atsena Otie Key.

Below it, the trail ends at the very edge of the water after a half mile. Gentle waves lap at the glasswort on the shore. There is a bench here that makes a prime spot for birding.

Retrace your path through the old cemetery. Keep alert for a side trail on the left before you get to the windmill. It’s a broad path across a stretch of coastal scrub, out in the open, with gleaming white sand.

The footpath drops down into the coastal hammock along the edge of the salt marsh, with a clear view of Snake Key, another of the islands protected by the refuge. As you can guess by its name, it is well earned.

Return to the main path and pass the windmill. Look for a side trail on the right that winds between scattered bricks and heads downhill through a coastal scrub.

Dropping to the edge of the salt marsh, it affords another view over to the docks of Cedar Key. Several huge prickly pears sit at the base of the bluff. Turn around and make your way back to the windmill.

Follow the trail back out to the big sign and the dock. You’ve hiked 1.2 miles. You can stop now, or take a stroll along the beach to look at a Civil-War era artifact. Follow the beach towards the view of Cedar Key’s waterfront.

Half-buried in the sand are the remains of a rusting rounded object, looking like half of an old steam boiler. It was used for making salt from sea water.

As you round the point, the wind picks up, Cedar Key no longer providing a buffer against the open waters of the Gulf of Mexico.

The beach yields to a stand of black mangroves, their finger roots poking out of the sand. Behind them is a sandy strip you can walk along for sweeping views of the salt marshes out to the tall longleaf pines on the far end of the island.

You see the windmill tower up on the bluff, off to the right. At 1.5 miles, the beach peters out into the grassy marsh. Turn around and walk back to the dock.

If you have the time, continue along the beach on the other side of the dock out to the salt marshes. Bearing multiple trunks and multiple layers, a grand old cedar tree rises from the sand bluff.

Continue out along the narrow sand path, a little spit of land bounded by salt marshes on either side. Pelicans skim low on the water.

Look for more remnants of the town: scattered chunks of brick and railroad ties, half-buried in the mud.

The path ends at a tidal pond, where blue crabs scuttle in the shallows. Turn around and return to the dock, completing 2 miles of walking on Atsena Otie Key. 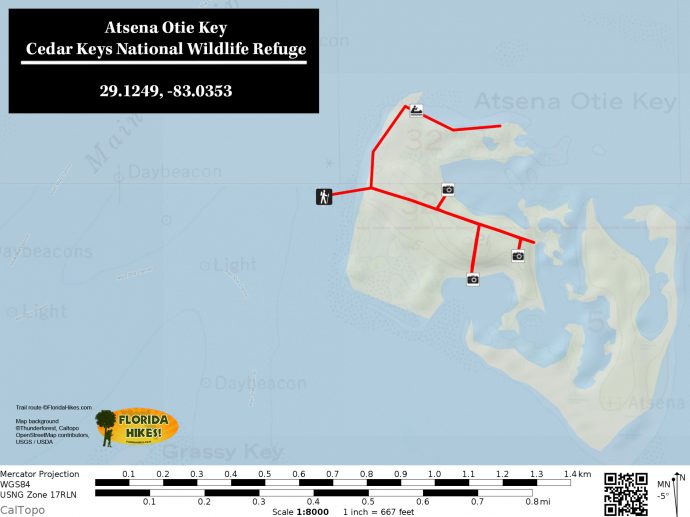 On the long dead-end road (SR 24) to Cedar Key, the route John Muir walked nearing his end of his Thousand Mile Walk to the Gulf, Cedar Key Scrub State Reserve protects upland scrub habitat for one of Florida’s rarest birds, the Florida scrub-jay. They travel in families, so if you see one, you’ll probably see several.

At the Shell Mound Unit of Lower Suwannee National Wildlife Refuge, the Dennis Creek Trail immerses you in classic habitats of the Gulf Coast along a 1-mile loop