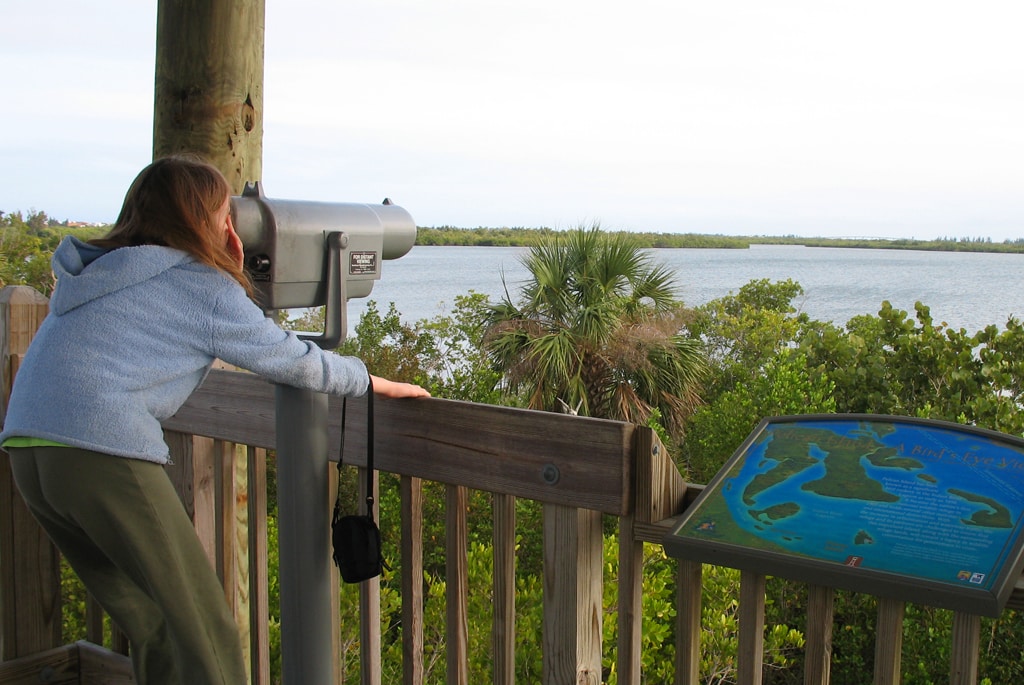 On March 14, 1903, President Theodore Roosevelt designated Pelican Island as the first Federal bird reserve. This first-ever act by the government to set aside land for wildlife would lead to the establishment of the National Wildlife Refuge system, as well as our National Parks and National Forests.

One hundred years later, Pelican Island’s Centennial Trail was the centerpiece of a nationwide celebration of the National Wildlife Refuge system. The Centennial Trail is the shortest and easiest of the refuge’s three trails, and its paved walkways and boardwalks make it fully wheelchair-accessible.

From the junction of CR 510 (east of Sebastian) and A1A, follow A1A north 3.5 miles to park sign on left. Turn left onto “Jungle Trail” and follow it 0.6 mile past the Jungle Trail parking area to the main entrance on the right. The paved Centennial Trail starts at the handicapped parking area.

The whole reason to take this little hike, of course, is for the birds. The island has long been a nesting area for brown pelicans, and this short walk features a wide variety of birds.

Our first sighting started with the impoundment adjacent to the welcome and historical kiosk. A black skimmer showed off its skimming behavior, swooping low to the water and shoveling it up with his bill. It was worth some time on a trailside bench to watch his technique.

The trail winds away from the impoundment and along the edge of a wetland you’d expect to see along the Indian River Lagoon, with cabbage palms and tall grasses.

As the paved path rounds a bend past a kiosk, it reaches the Centennial Boardwalk. Look underfoot as you head up this long ramp. You’ll see the names and founding dates of every National Wildlife Refuge, though some have faded from the sun and the wear of foot traffic.

Looking down and out, you’ll see a mangrove-lined canal popular with herons and egrets. Alligators lie in wait just beneath the surface along the brackish mud flats. A cormorant might be drying its wings while perched on a mangrove.

The boardwalk ends at a covered observation deck with two free telescopes for viewing Pelican Island, the nesting area for brown pelicans. Use your own binoculars or the telescope to sweep over the landscape and spot ospreys, green herons, and — of course — pelicans!

Take time to enjoy the view, the breeze, and the bird life — and be thankful that, more than a century ago, our ancestors had the foresight to start saving habitat for species that were disappearing. I hope we continue to walk in their footsteps.