A hiking route spanning more than 4,800 miles along the East Coast, the Eastern Continental Trail spends nearly 1,300 miles crossing Florida from its southern terminus at the Southernmost Point in Key West.

A series of trails interconnected by roadwalks make up the Eastern Continental Trail, a hiking route spanning the East Coast from Key West through Quebec, more than 4,800 miles.

Between Key West and the Florida/Alabama border, the Eastern Continental Trail is made up of three components: the Florida Keys Overseas Heritage Trail, the Florida ECT Connector, and the Florida Trail. Utilize the Blackwater section of the Florida Trail to reach Alabama. We have hiked/biked and documented all of these segments and created map-based FarOut Guides for each piece. All three of the apps are available for any smartphone or can be used in any browser for planning purposes.

The ECT connector segment outlines the roadwalks and pathways to connect the Overseas Heritage Trail and the Florida Trail between Key Largo and Oasis Visitor Center in Big Cypress National Preserve, with details on camping, trailheads, and resupply.

Major Trails of the ECT

Existing trails are connected by roadwalks to make up the Eastern Continental Trail. Major components of the ECT include:

There are connecting roadwalks between a number of these existing trails which add at least another 50 miles to the route.

While many choose to end their hike at Cap Gaspe, Quebec, the trek can be extended by continuing north through Newfoundland and Labrador, Canada, for another 556 miles.

This extension is part of a route is described in detail by Nimblewill Nomad in Where Less The Path Is Worn as the “Trail of the Ancients,” following the Appalachian Mountains from Flagg Mountain, Alabama to Belle Isle, Newfoundland.

The components of the ECT in Florida are:

All ECT hikers start their hike at the Southernmost Point in the United States, a marker found in Key West at the southernmost spot with public access.

It is 200 miles between the Southernmost Point in Key West to the Southern Terminus of the Florida Trail at Oasis Visitor Center. 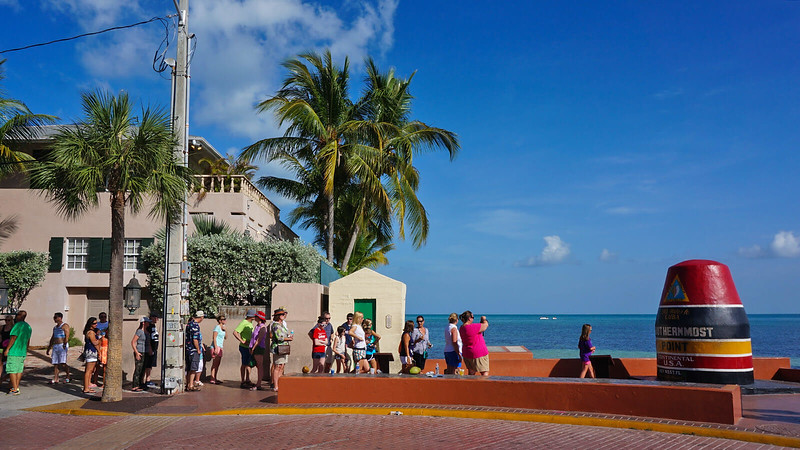 From Key West, the route follows the The Florida Keys Overseas Heritage Trail, a paved bike path and bike route through the Florida Keys.

A roadwalk along US 1 from Key Largo followed by a hike up the Southern Glades Trail gets you to the mainland just a couple miles outside the gates of Everglades National Park along CR 9336. 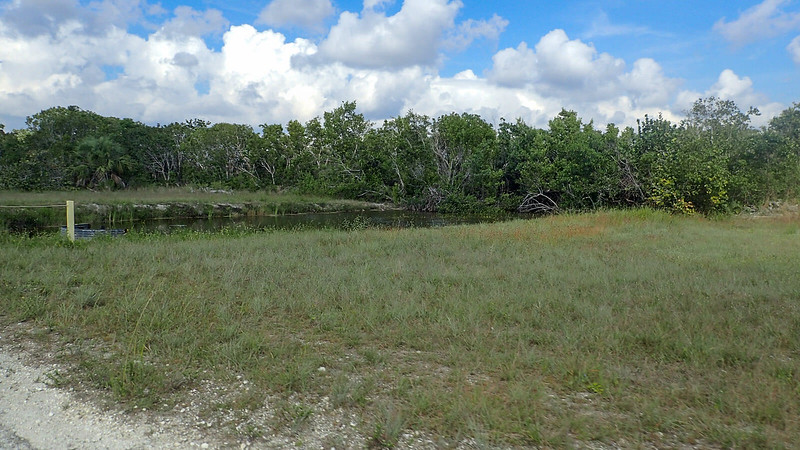 Along the Southern Glades Trail

Resupply between this point and the start of the Florida Trail must be planned and requires going off trail to communities to the east of the trail route.

From this road to the southern terminus of the Florida Trail is 60.7 miles of roadwalk on dirt roads / levees and paved roads, followed by 8.2 miles on a wade through Robert’s Strand.

North of Key Largo, there is only one small convenience store that hikers walk past on the Miccosukee Reservation, with irregular hours. You will not find supplies again until the Seminole Reservation.

There is also a large convenience store / small truck stop 1.5 miles east of the trail route at Dade Corners, cattycorner from the Miccosukee Casino & Resort along US 41.

Additional services information and mileage data for the ECT route are in our guidebook, The Florida Trail Guide, as a special back-of-the-book addendum. Look for updates to that addendum here.

It’s smart to reserve hostels / campsites / hotels in this area in advance, since winter is the busy season in the Florida Keys.

The first two weeks of December have the cheapest rates for hotels in the Keys. AirBnB is a good option as well.

Stealth camping isn’t recommended in the Keys as what few forested areas you encounter are dense with poisonwood, a toxic tree with sap far more irritating than poison ivy. However, there are those who have done so successfully. Ask in online forums for tips.

43.6 miles. With the most island-hopping of the ride, the middle portion of the Florida Keys delights with its aquamarine waters and coconut palms, a very tropical vibe.

26.8 miles. Through the most heavily populated part of the Florida Keys, the trail quickly leaves water views behind for tropical forests between residential and commercial areas.

Florida Keys to US 41

This segment includes 9.9 miles of roadwalk along busy US 1 with fences on both sides of the highway, followed by 39.6 miles along three different trails used by offroad cyclists and water management trucks along the South Dade Greenway system along the eastern edge of Everglades National Park.

US 41 to Florida Trail southern terminus

This segment includes 10.3 miles along levees north of US 41 between Dade Corners and the Miccosukee Reservation in Everglades & Francis Taylor WMA, and 23.6 miles of roadwalk along US 41 and Loop Road to reach the historic southern terminus of the Florida Trail, now the Robert’s Lake Trail. The new southern terminus of the Florida Trail is at the Oasis Visitor Center, which the Robert’s Lake Trail leads you to.

8.2 miles. Now the Roberts Lake Trail, the former Loop Road to Oasis section of the Florida Trail is now blazed blue. It is where sawgrass and cypress meet, where the Everglades and Big Cypress blend.

As you head north decision points are west or east along Lake Okeechobee (west recommended) and west or east around the Orlando metro (Western Corridor vs. Orlando/Ocala sections). In the Yellow River Ravines of the Eglin section take the Blackwater section north from a prominent trail junction.

38.3 miles. Featuring the wettest, wildest wilderness traversed by backpackers in Florida, the Florida Trail in Big Cypress National Preserve is both beautiful and extraordinarily challenging.

56.2 miles. Stretching from the Big Cypress Seminole Reservation to Lake Okeechobee, the Florida Trail Seminole section traverses a vast agricultural region, the former Everglades. Hiking is on roads and levees.

112.8 miles. Looping around one of America’s largest lakes, the Okeechobee section of the Florida Trail provides panoramic views from atop the Herbert Hoover Dike.

111.3 miles. Following the Kissimmee River floodplain, this is a scenic section of the Florida Trail with a mix of levees, shady woods, river views, open prairies, and cattle ranches.

148.0 miles. Spanning from the Ocala National Forest south through the prairies of Osceola County, the Orlando section of the Florida Trail encompasses the eastern suburbs of the Orlando metro

72.3 miles. The birthplace of the Florida Trail and home of the world’s largest sand pine scrub forest, the Ocala section is Florida’s top backpacking destination

123 miles. Showcasing the best public lands, the Florida Trail walks you into the past between Palatka and Osceola National Forest, through rural farms and timber lands.

74.8 miles. Along the Suwannee River, the Florida Trail clings to bluffs and scrambles through ravines for physical challenges and great scenery

116.2 miles. After crossing rural farms and forests in the Big Bend, the Florida Trail reveals the secrets of the Aucilla River before tracing the Gulf coastline at St. Marks NWR

99.3 miles. West of the Apalachicola River, the Florida Trail stitches a series of public lands together along the corridor of the Northwest Florida Greenway.

98.3 miles. One of the most compelling sections of the Florida Trail for backpackers, Eglin offers rugged elevation changes and crystalline waterways.

45.5 miles. The Blackwater section of the Florida Trail walks you through Atlantic white cedar and longleaf pine forests, pitcher plant bogs and titi swamps en route to the Alabama border.

Taking a ride through the Everglades on one of Miami-Dade’s most remote offroad bike trails made for “Bill and John’s Most Excellent Adventure.”

Southeast Florida is home to two poisonous trees, the poisonwood and the manchineel. Learn how to recognize them so you don’t get too close, and find out how truly dangerous they are.

A series of “Love to Hike” interviews is coming soon to inspire you to get outdoors, and I’m calling on my inspirational friends – like Nimblewill Nomad – to inspire you.

The comprehensive mile-by-mile guidebook to planning section and thru-hikes along the entire length of the Florida Trail. 356 pages, $19.95 + tax and shipping.

Fifty of the best day hikes, overnights, and weekend trips on the Florida Trail, plus nine of the best section hikes. Full hike descriptions and maps, full color. 376 pages. $24.95 + tax and shipping.

Our virtual walk along the length of the Florida Trail, covering more than 1,500 miles from the Everglades to Pensacola Beach. Hardcover, 196 pages. $24.95 + tax and shipping.
Order Now

Our history of the first 50 years of the Florida Trail, from its founding in 1966 to becoming a National Scenic Trail to volunteer efforts today.
Learn More