A preserve along the historic Key West Salt Ponds, Little Hamaca Park has a boardwalk and footpath leading through a cross-section of the island’s habitats.

A preserve along the edge of the Key West Salt Ponds, Little Hamaca Park has one of the few nature trails you’ll find in Key West.

It follows a boardwalk and footpath winding through a mangrove forest and salt flats tucked away in a hidden corner of the island.

It straddles a small ridge that runs across this part of Key West, enabling you to encounter a cross-section of the island’s habitats.

A half-mile round-trip walk leads to the canal that once provided the water for salt production in the ponds. Today, the park is a haven for birds and wildlife.

Open sunrise to sunset. Kayakers launch into the salt ponds at an access point not far inside the gate on the right. Please use your city smarts in this park: we observed what looked like homeless encampments, or the remains of them, in several places. The police do patrol this dead-end road. Also, be alert for the wildlife that lives here, as noted on this sign at the beginning of the trail.

On our June 2018 visit, we noted that the mangrove forest was thinned out a great deal since Hurricane Irma, but the boardwalk has been rebuilt and everything looks fresh and new. You can now see farther across the flats as you walk.

From Flagler Avenue, follow Government Rd down a very long straightway through the linear Fran Ford White-crowned Pigeon Preserve into Little Hamaca Park. The fence to your right is the back of the airport. After the sharp bend in the road, look for the trailhead parking area on the left.

Constructed for the manufacturing of salt during the 1830s, the Key West Salt Ponds once covered a hundred acres of man-made shallow pans carved into the coral rock of the island. Suspended during the Civil War and abandoned several times, the commercial salt-making operation ended by 1906. Meacham Field, the first runway on Key West, was built atop the salt ponds in the 1920s, when Pan American Airlines began flying. It eventually became the Key West International Airport.

As you drive down Government Rd, you’ll catch glimpses of the Key West Salt Ponds on both sides of the road, with access points in several places. The Fran Ford White-crowned Pigeon Preserve is a patch of tropical hammock on the slight ridge above one of the ponds, with tropical plum trees providing this rare pigeon’s preferred diet. There are a few picnic tables roadside.

After the 90* bend in the road, the trailhead is on the left. It can only accomodate a few cars. The well-constructed boardwalk starts here, leading you into the mangrove forest. Look for evidence of raccoon tracks along the tidal waterways. The boardwalk winds out of a tunnel of mangroves and into a broad open space above one of the salt ponds. If it’s been dry for a while, you can see caked salt on the bottom, big white patches where nothing can grow.

When the boardwalk ends, it drops you down onto a footpath which can flood at high tide. A handful of boards have been tossed over the potentially wet areas. Entering a short stretch of tropical hammock, trail’s end is at a dock on the Riviera Canal. This canal was built to feed the salt ponds, cut inland from Cow Key Channel. You may notice some shallow hand-cut feeder channels in the rock, used to flood the salt ponds. A board would be placed across the channel when enough sea water filled the pond. Sunshine did the work of evaporating salt from seawater.

Once back at the trailhead, you can continue farther down Government Road to additional viewpoints over the ponds for birding. The road ends at what was once a Cold War-era missile silo complex. It’s now a city-managed paintball field. 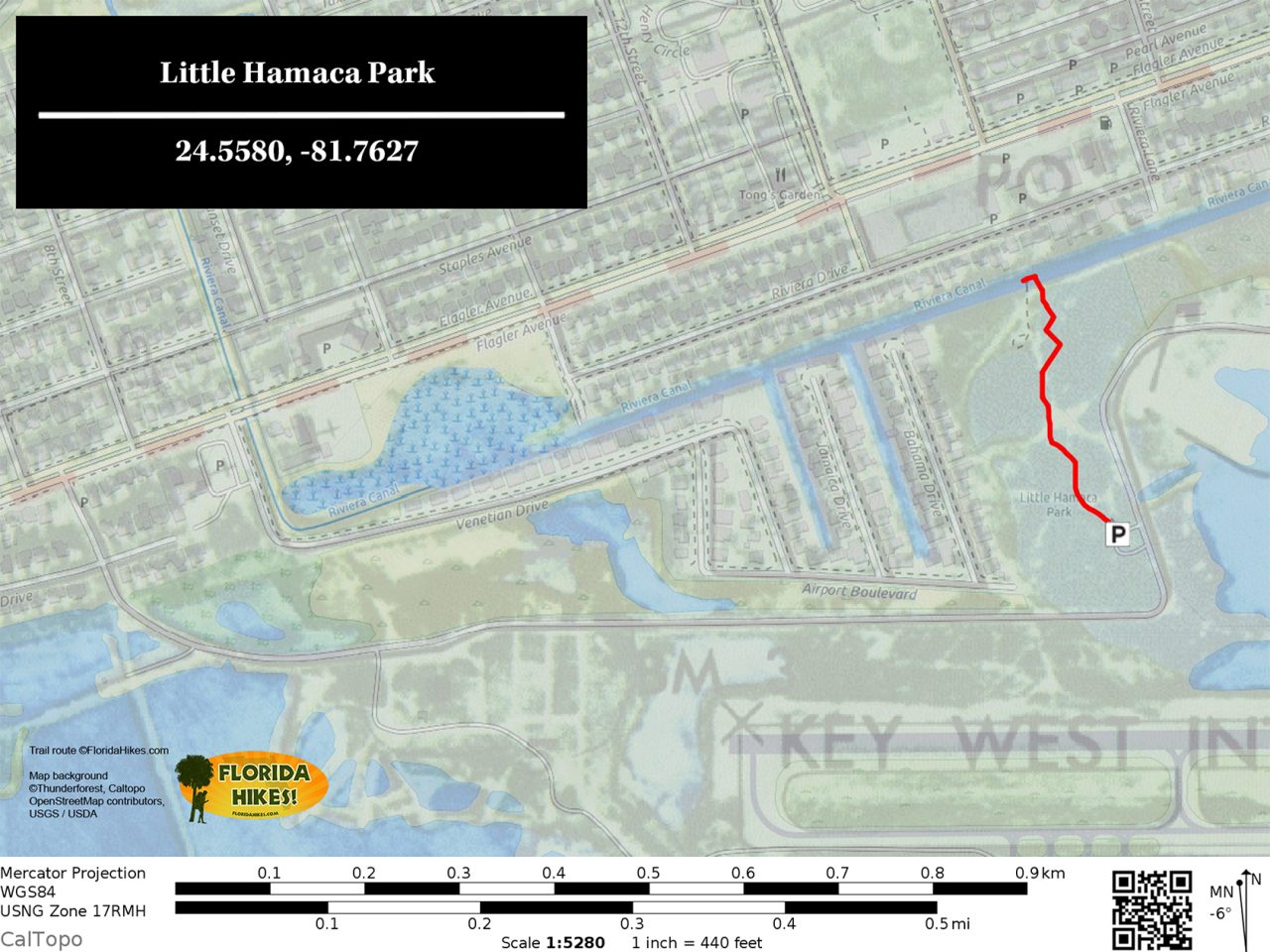