A month before, Sandy and I had a reason for an overnight trip that took us into Hobe Sound. 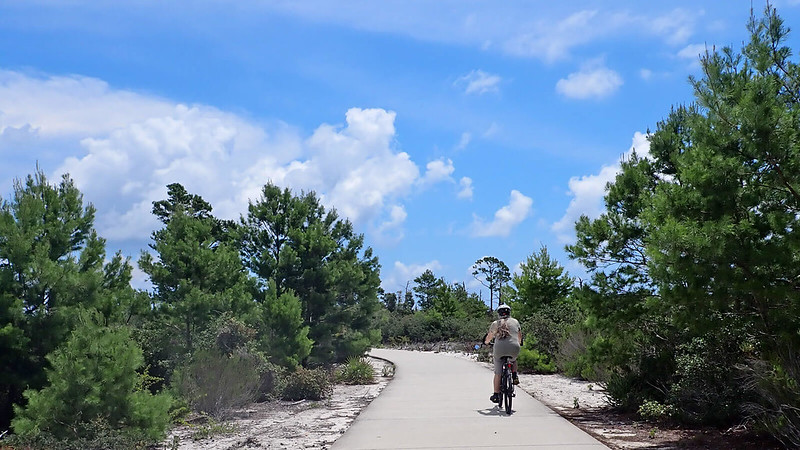 Along a wooded stretch of bike path in Seabranch Preserve

Despite the heat, we had a pleasant ride between the state park and Peck Lake Park to its south.

We ducked into the well-hidden Gomez Preserve between the two to check it out, and enjoyed a 7-mile round trip. 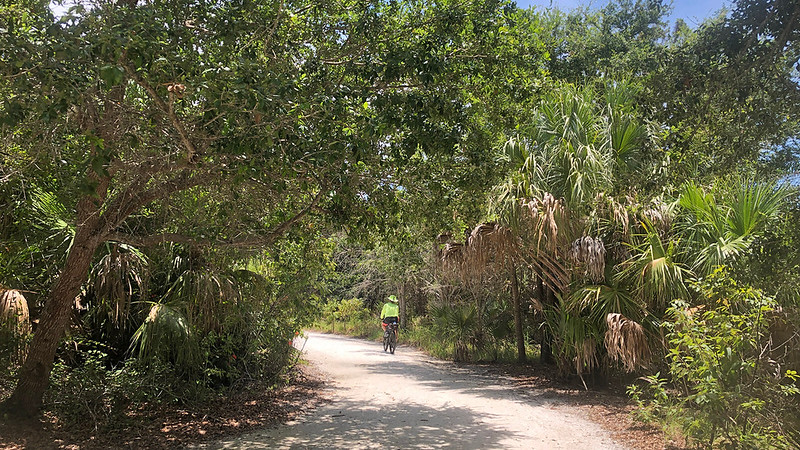 This month, our goal was for me to connect to that 3.5 mile piece of the East Coast Greenway by starting in Port St. Lucie and riding south.

Sandy planned to spend the morning hiking at Savannas Preserve State Park, so she dropped me off at the start of the paved trail that headed south from Walton Rd.

The starting point for my ride

The bike path was a straightaway south in full sun on a broad greenway between the fence for the state park to the east and Green River Parkway to the west.

Along the first portion of the trail were rest areas with native landscaping, pavers, and benches. Each was a nice little nook.

Cyclist using one of the rest stops

Each had a prominent East Coast Greenway sign, so I knew I’d started in the right place.

Unfortunately, these would be the only such signs I saw on my ride.

I knew the one to the east led to a state park entrance, since we’d stopped there to use the restrooms. Seeing no signage, I crossed and continued south.

I was on the same path on the same side of Green River Parkway, but with no confirmation I’d taken the right route.

The surroundings became residential as I reached the outskirts of Stuart.

At a traffic circle, I took the obvious route through the roundabout by using the crosswalk to the west side of the parkway.

My choices were now riding the road or a narrow sidewalk. After it narrowed substantially, the road was marked for sharing with cyclists.

Hot dog stand at an intersection

With no pedestrians in sight, I stayed with the sidewalk. Beyond an intersection, I could see a marina up ahead.

Once I reached it, I turned into the parking lot and rode to the edge of the St. Lucie River for a look.

The St. Lucie River at the marina

I’d passed under the US 1 bridge over the St. Lucie River just before reaching the marina.

From this waterfront vantage point, I could see that my route into downtown would be along what must have been old US 1 (Old Dixie Highway) over a drawbridge into downtown.

Just past the bridge and signage for the Stuart Riverwalk, I came to detour signs and construction.

A crew was installing a new set of tracks through downtown for the Brightline high speed rail and the roads were a mess. 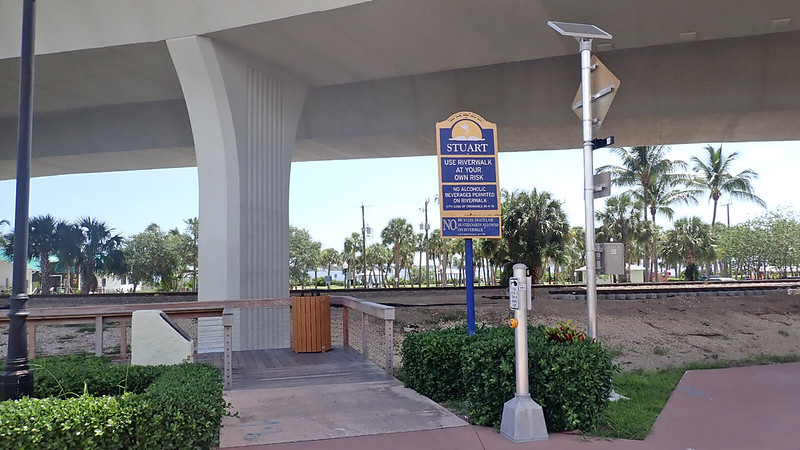 I stayed on the sidewalk until a couple of the workers told me that I needed to be on the other side of the street.

This new rail line was very tight against the compact historic downtown of Stuart.

Riding between the construction trucks and the rail line

The next day, I’d see a sign along this same rail line in downtown Hobe Sound. It warned of trains passing by at 80 mph.

Considering the vehicle and pedestrian traffic crossing this rail line at road crossings, it seems like a disregard for people’s lives over speed. 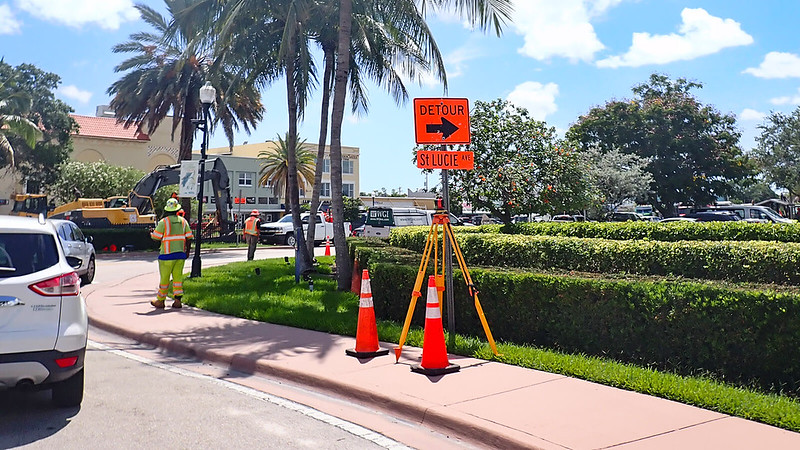 Reaching another roundabout at the end of the little downtown, I wasn’t sure where the East Coast Greenway went next. I’d still found no signage.

I pulled off the road and tried pulling up the interactive map on the Greenway website, but couldn’t get it to work. 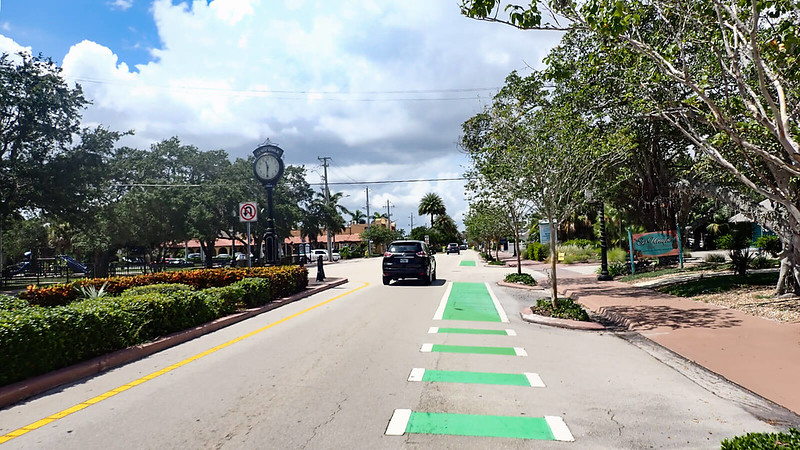 Since there were green-painted bike lines heading west, I followed them. I soon ended up at US 1.

After making a few loops looking for an East Coast Greenway sign, I called the number listed on their website for their Florida representative.

Unfortunately, he hadn’t been through this segment since the construction began, so he wasn’t able to talk me through finding the right route.

I knew that US 1 would at least keep me headed south, so I crossed it and continued on the sidewalk.

Reaching US 1 in Stuart

There were lots of business entrances and traffic so I took it slow and easy looking for a good place for Sandy to easily pull in and pick me up.

By the time I called her, thunderstorms were rolling in. She agreed given the weather, it would be best to save it for another day.

Ending my journey in Stuart 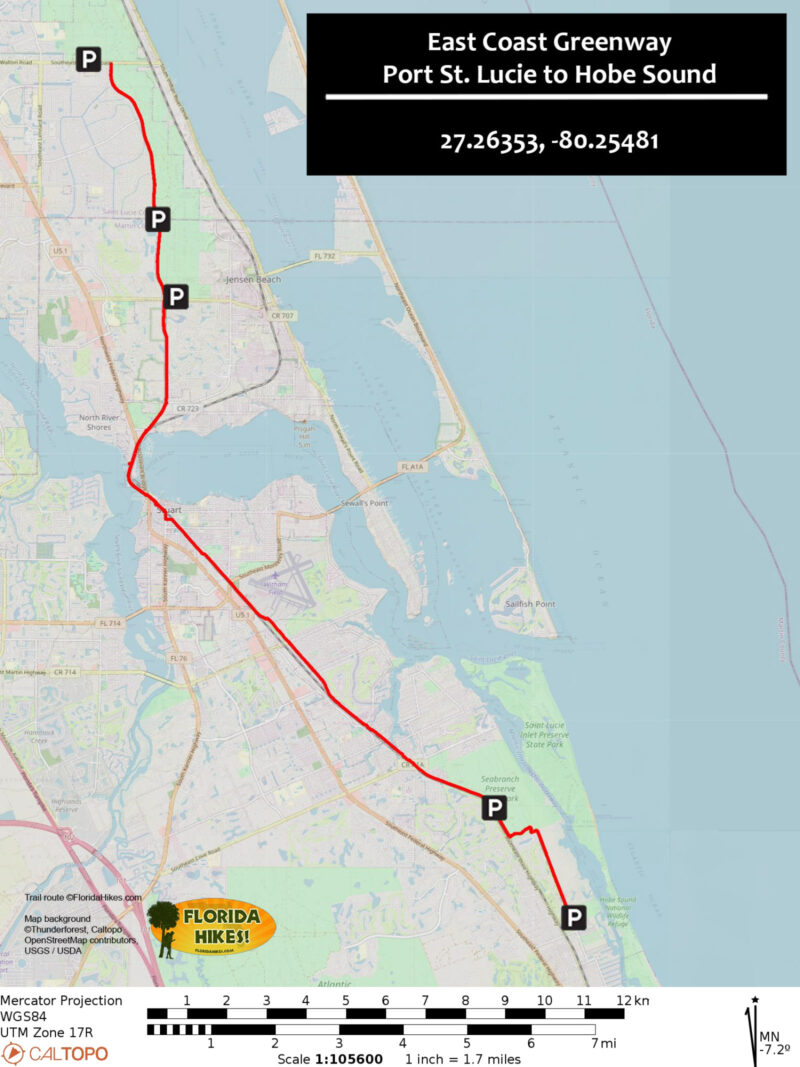 See our photos from this segment of the East Coast Greenway

Spanning two counties along a slender 10-mile strip, the fragile freshwater savannas and open prairies of Savannas Preserve State Park are just a few miles from the Atlantic Ocean and lie behind a line of ancient sand dunes.

On its mile-long loop, Hawks Bluff Trail at Savannas Preserve State Park shows off the best scenic views of freshwater savannas near the Atlantic Ocean

Beyond its prominent ballfields, Halpatiokee Regional Park hides a rich network of hiking, off-road biking, and paddling trails along the South Fork of the St. Lucie River