Hugging the north rim of Paynes Prairie and spanning 125 acres, Sweetwater Wetlands Park is unlike any of the other places you can hike along the prairie’s edge.

First, it’s a wetlands park. In most of Florida, what that means is a place for slow filtration of treated wastewater before it is discharged into a natural waterway.

Birds and other wildlife gather in the pools of wetland parks, making them great destinations for wildlife watching. Sweetwater Wetlands is no exception.

At Sweetwater Wetlands Park, the purpose is to filter water flowing into Paynes Prairie from Sweetwater Branch. The origin of this creek is northeast of downtown Gainesville.

For more than a century, stormwater runoff has been shunted into this creek, which is buried in culverts through parts of the city. In the 1930s, ranchers cut canals through the prairie, killing off wetlands.

When it was discovered that Sweetwater Branch was harming the aquifer because of the high nutrient load it carried directly to Alachua Sink, plans were put in place to build this natural filtration system. The hiking trails are a bonus.

Open 7 AM to dusk daily. Hiking only. No pets, bicycles, or drones permitted. Gates close a half hour before dusk.

Stay on established trails. Alligators are common here. Keep your distance: a recommended 20 feet between you and the alligator.

With paved paths, boardwalks, and a limerock surface on the levees, the park is mostly accessible. For assistance, please contact them at least 48 hours in advance of your arrival at 352-393-8437 to let them know your needs.


From I-75 at Williston Rd at the south end of Gainesville, drive east on Williston Rd (SR 331), crossing US 441 after 4.3 miles. Continue around the curve past Main Street and watch for the well-marked entrance road on the right.

From the east end of the large parking area, a path leads down past an interpretive pavilion with restrooms into the woods.

This is the sole access point to the trail system at Sweetwater Wetlands Park, descending down an accessible paved path and boardwalk to the level of Paynes Prairie.

Once you reach level ground, there are several options for hiking. The easiest thing to do – and the one you won’t want to miss – is to walk the boardwalk loop that starts at the covered pavilion off to your left.

A gentle walk from the parking area around that loop and back is 3/4 mile.

Most visitors go for a longer walk because that’s the best way to see wildlife. Arriving very late at the day, we tackled the loop around Wetland Cell 1, the nearest impoundment to the entrance.

Making a left, you can follow the limerock road around the perimeter of this wetland. Right away, we saw a very large yellow rat snake.

Paynes Prairie is well known for its healthy snake population, so you can pretty much expect to see them warming up on the bright white limestone.

Alligators sightings should be expected, too. It’s best to stay on the levee, where you can see what’s around you, than to go roaming through the grass to the water’s edge. You might spook an alligator. Or vice-versa.

In Wetland Cell 1, a variety of heights of grasses and plants provide filtration for the water and cover for wildlife. In summer, the American lotus open their large yellow blossoms.

As you round the corner down a straightaway towards the prairie, you’ll notice covered pavilions off in the distance. Those are benches along a waterway.

A canal separates this park from the marshes of Paynes Prairie. The trail reaches the canal and curves left to follow it. The far shore has large willow trees amid a tangled mass of vegetation.

As the path reaches the curve up to Sweetwater Branch, you have the option of following a gravel path closer to the water, with the solar-panel-topped benches offering a place to sit and watch wildlife.

Now facing back towards the way you came in, you can look off to the east and see the pathways that circle Cell 2 and Cell 3. But you can’t get to them yet.

Reaching the boardwalk, turn left. What makes walking this part of the park a delight is when you look down, you’re bound to see something.

It might be an alligator. Or a nest with baby coots. Or a banded water snake, or a water lily in bloom.

Interpretive signs along the boardwalk explain some of the natural filtration features of this wetlands park along with the species of plants and birds you see here.

At the T intersection, turn left to continue along a spur of the boardwalk. It leads out to a patch of more open water where the water lilies thrive.

Return back along the boardwalk, which guides you to the pavilion at the shoreline, a nicely shaded spot. This is your decision point. So far, it’s been a 1.5 mile hike.

To pile on more mileage, head for the west side of the park. It’s a 1.9-mile loop around the perimeter of Cell 2 and Cell 3, with lots of frontage along the prairie.

You can also slice that mileage in half by following a levee between the two cells.

In all, you can walk up to 3.5 miles in Sweetwater Wetlands Park without repeating much of your route. If you show up more than once, you’ll discover a lot of locals who use this as a walking circuit in the morning or evening. 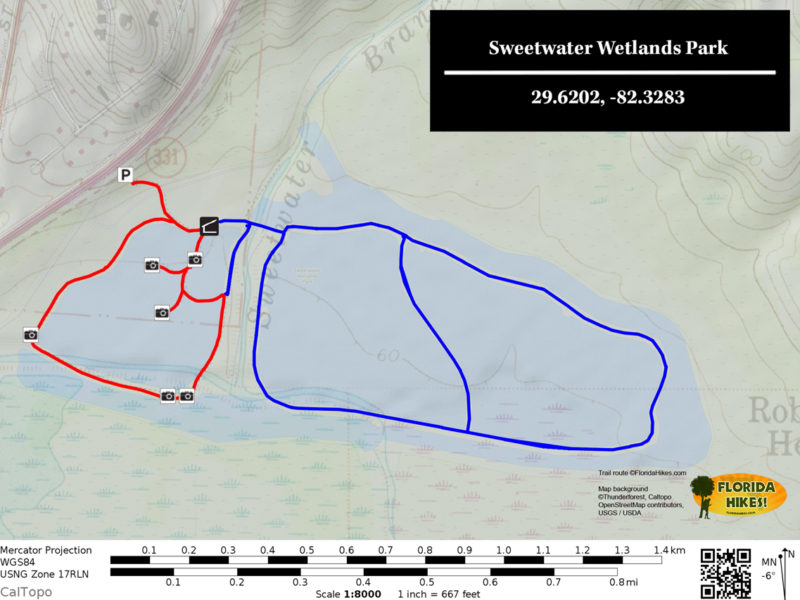 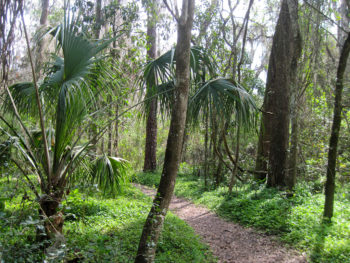 The City of Gainesville’s very first nature park, Bivens Arm surrounds a marshy “arm” of Paynes Prairie, where trees tower above the network of nature trails. 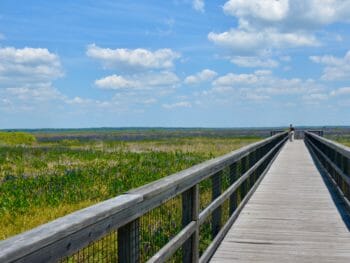 Providing the easiest-to-reach panorama of Paynes Prairie, the Ecopassage Observation Boardwalk encourages you to stop and take it all in 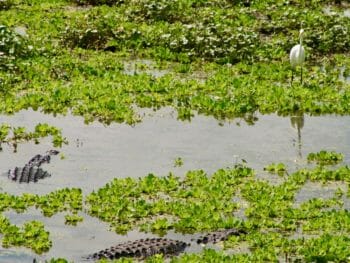 There are a handful of places that stand out as excellent locations for wildlife watching in Florida, but the best place to see alligators is in the home of the Gators, Gainesville 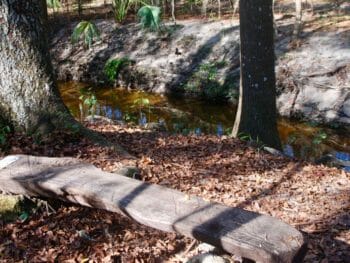 On the eastern side of Sweetwater Preserve, hike a gentle loop through the woods along Sweetwater Branch. 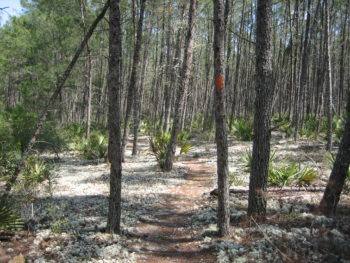 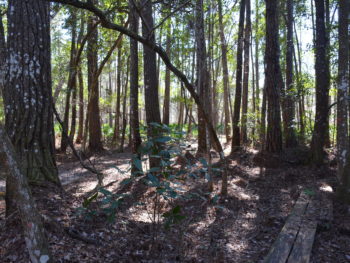 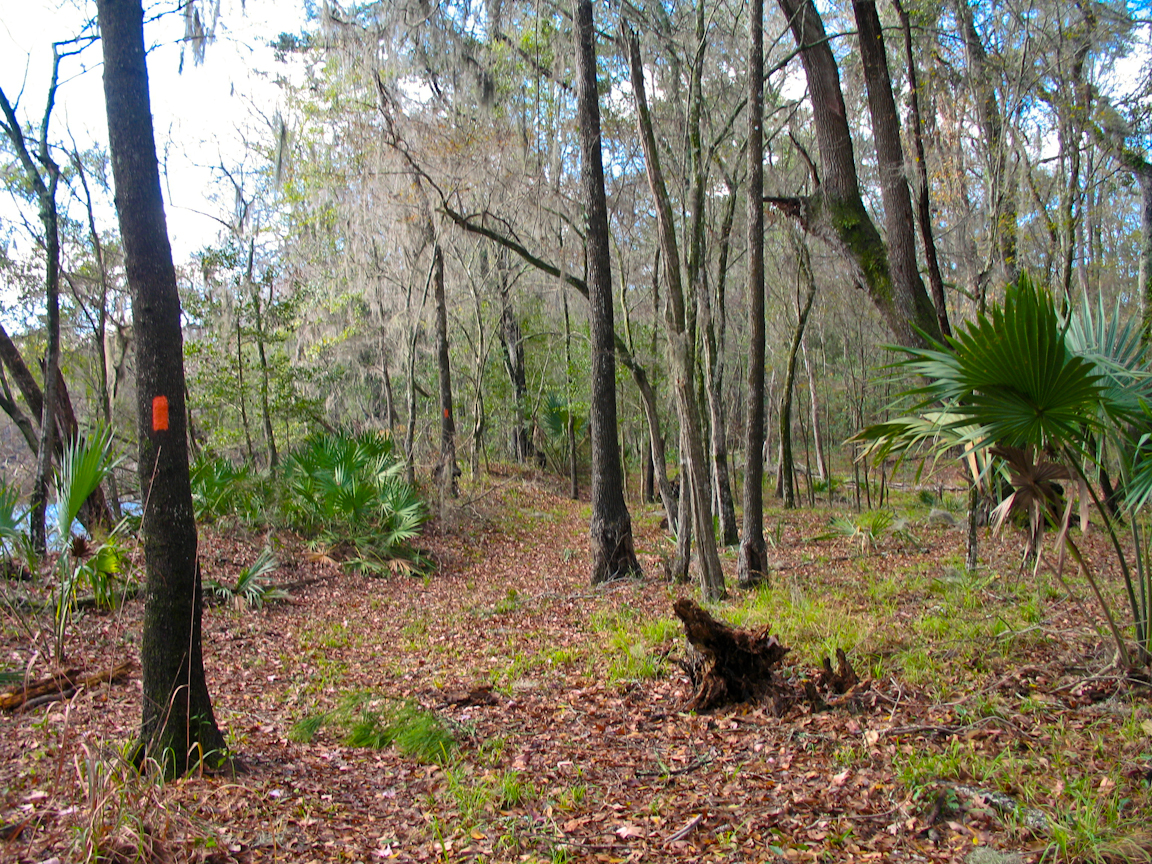