Explore both the wild and mild sides of an urban mangrove jungle at West Lake Park by hiking, biking, or paddling this outstanding Florida Water

Home to the iconic Hollywood water tower and to Anne Kolb Nature Center, West Lake Park is much larger than it appears as you drive through it on the way to North Hollywood Beach.

Protecting more than 1,500 acres of a vast mangrove forest through which the waters of the Stranahan River flow, it stretches from the south edge of Port Everglades to North Lake, a distance of about 3 miles.

Open 8 AM to 6 PM. Pets welcome except at the Anne Kolb Nature Center, which is open 9 AM to 5 PM.

Kayak rentals are available at the kayak launch and dock area in the recreational corner of the park at the address above. 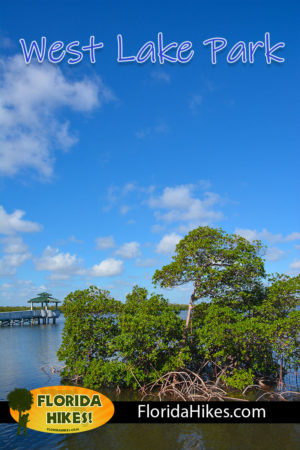 
From Interstate 95, drive east on Sheridan St for 2 miles. The first park entrance is on the right, at a traffic light adjoining the water tower. This leads to the kayak launch and dock and other recreational facilities as well as a network of paved trails.

For the Anne Kolb Nature Center and access to hike or bike the South Trail, continue another 0.6 mile, driving over the bridge over West Lake, and make the next left just before the bridge over the Intracoastal Waterway.

There are four distinct destinations in this enormous urban park, which opened to the public in 1996. Each is roughly defined by a quadrant bisected by Sheridan Street.

At the southwest corner, the main entrance adjoining the water tower leads to a small recreational complex, the center of which is anchored by a playground.

At its east end, there is a boat ramp and marina. The kayak launch adjoins a boat dock and provides rental kayaks.

Behind it, a paved trail ambles around an arm of West Lake, providing decks for wildlife observation or fishing. Along with a footpath up the other side, you can walk a 1.1 mile loop.

Picnic tables are scattered throughout this area, with some under cover adjoining large grills. West of the playground are basketball, racketball, and tennis courts and restrooms.

Although you can’t see the main body of West Lake from this complex, kayakers and boaters have a straight shot out of a canal from the boat basin into the open waters of the lake.

Water tower at the main complex

West Lake and its surrounding mangrove forest occupy the center of the park and are the domain of boaters and kayakers who put in from the ramps at the main entrance.

Boaters can head south to exit to the Stranahan River at the south end of the lake. Kayakers have some mazy meanders to explore where the canal meets the lake.

In this northwest quadrant, there are mangrove islands to paddle around, and you’ll see the boardwalks along the lake at the Anne Kolb Nature Center.

One of the most popular destinations at the park, the Anne Kolb Nature Center is an educational complex centered on an nature center focused on the mangrove forest that surrounds it.

Don’t miss the views from the 68-foot observation tower, which you can climb or take an elevator up to the top.

Whether it’s from the top of a five-level observation tower or at ground level with the land crabs, Anne Kolb Nature Center focuses on the urban mangrove forest that it protects and interprets

The nature center offers ecotours on a boat that visits the north end of West Lake, as well as regularly scheduled programs.

Two accessible trails radiate from the nature center, the Lake Observation Trail and the Mudflat Trail, both of which follow boardwalks to the edge of West Lake. Walking both totals 1.4 miles.

The South Trail at West Lake provides the most open space for hikers and cyclists at the park.

Two spur trails burrow deeper into the mangrove maze, making for quiet destinations for birding. Expect mosquitoes to dog you when you walk slowly.

Access the trail by foot or by bike by following a paved bike path starting at the Anne Kolb Nature Center. It is also accessible from the Sheridan Street side path.

Walking the loop from the nature center is a 2.5 mile hike. If you add in the two dead-end spurs, you can tack on another mile of walking.

With its shores dwarfed at times by the giant cruise ships steaming in and out of Port Everglades in Fort Lauderdale, Dr. Von D. Mizell-Eula Johnson State Park is well-known as a great nearshore dive spot

Designated the first “urban wilderness area” in Florida in 1978, Secret Woods protects a 56-acre floodplain of cypress strand and mangroves with uplands of tropical hammock

Preserving 450 acres on the edge of Pembroke Pines, Chapel Trail Nature Preserve makes an excellent birding destination as well as an easy-to-reach sampler of Everglades flora and fauna