In a climax sandhill forest amid rolling hills topped with farms in northern Walton County, tiny Lakewood Park hides an unexpected draw that attracts thousands of visitors each year: Britton Hill, Florida’s high point at 345 feet. Now as for finding the actual high point? Well, there’s the mystery. There are three signs where you can photograph yourself at “the highest point in Florida,” so we did a little sluething to try and figure out which one is correct. And we found trails. Of course.

Start at the obvious trail on the south side of the park. The trail leads into the climax sandhill forest, dense with tall laurel oaks. Yaupon holly, huckleberry, and high-bush blueberry grows in the understory. Watch for plastic markers acting as blazes. Fungi grows thickly on rotting logs. This being a climax forest, the laurel oaks are coming to the end of their lives and crashing over.

Skirting deadfall, you quickly come up to a bench at a T intersection after 0.2 mile, with several trail options. Turn left. Red markers start leading you through the forest, tunneling deeper into the sandhill. As the trail starts winding around, you start to see the farms beyond the forest. Curving left, the path leads you past the edge of a farm where hay bales are stacked high. The path turns left and drops into a furrow of sorts, an old road or tractor path from when this little park was once a farm. It becomes a straightaway, the landscape falling off to the right.

The next bench sits in a relict patch of healthy sandhill forest at a half mile. There is a blue marker at the trail junction. This is the bench that’s closest to the actual topographic high point, and it has a sign about being sponsored by highpointers.org.

Continue straight ahead at this junction, and the trail begins an obvious descent. If not for the thick forest around you, there would be a view. A gully drops off to the right, towards the road. Slipping through a slash pine forest where more gullies show erosion caused by rainfall, you catch a glimpse of the parking area below.

Emerging into the open grassy space of the park, walk across it to the granite monument to Florida’s high point – no, that’s not actually the high point, but it makes a good photo. There is a trail behind it. Following it, you walk along another furrow-like old path through the climax sandhill on the blue-marked trail under the slash pines. Passing a bench just after the trail makes a sharp left curve, you come to the junction of trails again and turn left on the blue trail, which appears to ascend. It cuts through the middle of the loop and ends up back again at the bench near the high point – we tried, but could not figure out exactly where the high point is, other than it is somewhere along this trail. Turn left to once again walk past the gullies and through the pine forest to exit. 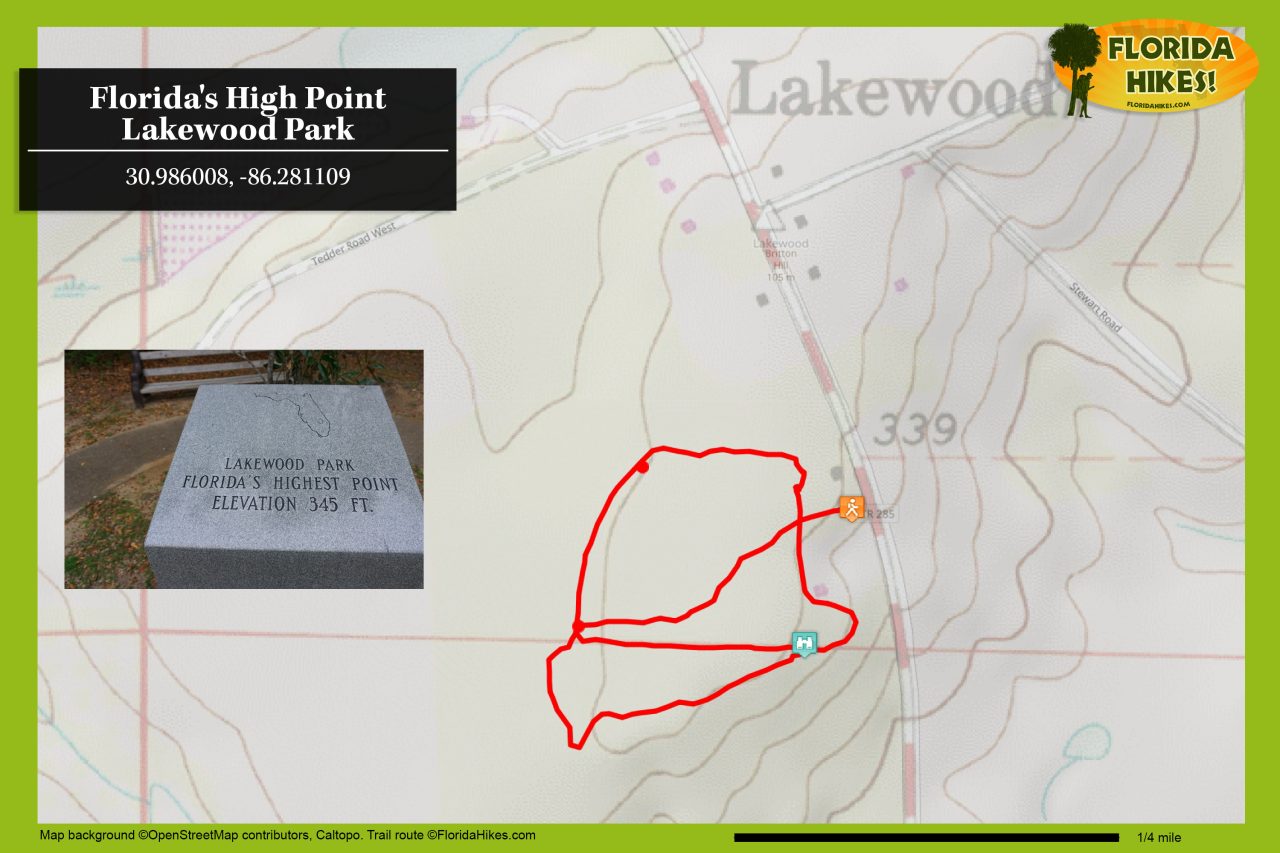